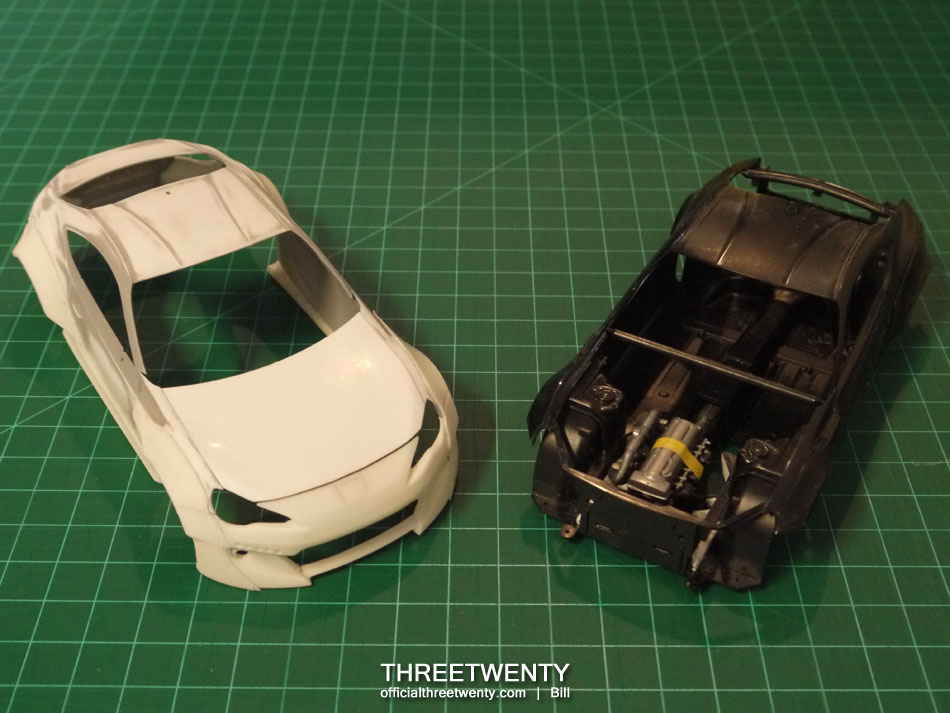 I generally don’t post about model kits I’m building but given that these are quite popular cars in real life I thought some might be interested in taking a look. It’s no secret that I am a huge fan of the Rocket Bunny kits for the FR-S and BRZ so when scale versions were released I immediately took notice. After collecting everything I needed from a few sources I had two FR-S models and both the V1 and V2 Rocket Bunny kits. 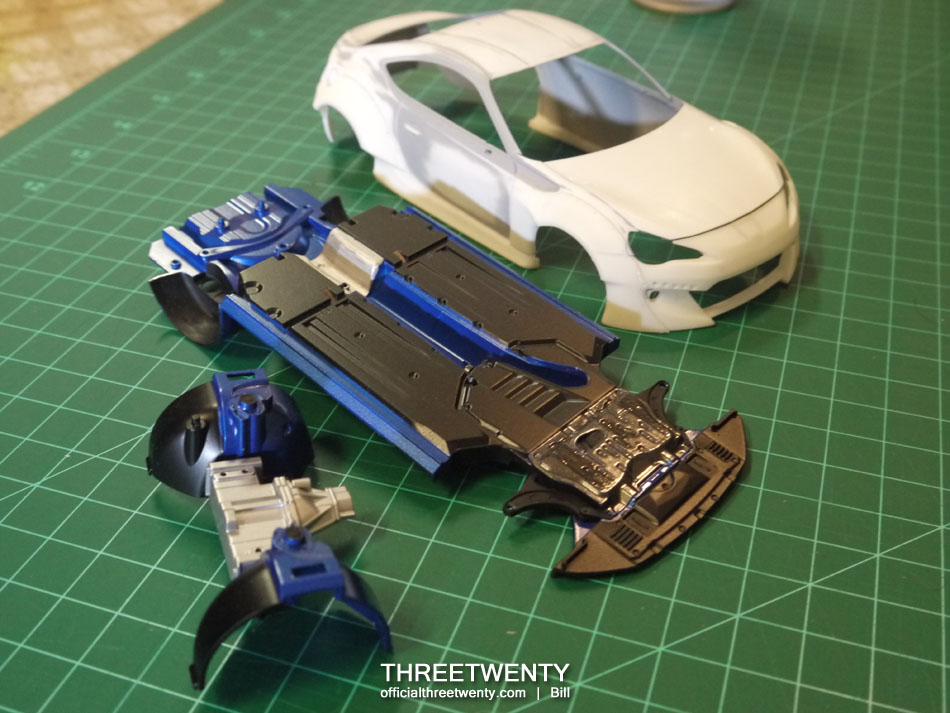 There was a BRZ with a V2 kit displayed at SEMA last year which remains one of my favourite Rocket Bunny cars, and that is what this model is being built to replicate. I won’t say which car yet, but it shouldn’t be too hard to figure out given the paint colour seen here on the chassis and engine bay parts. The kit itself is a Tamiya FR-S, but the BRZ-specific parts (headlights, fender garnishes, etc) will be added in later to keep it accurate.

Following the real car’s progress, I see that it’s actually undergoing a makeover for this year’s SEMA show so the model won’t even match it when it’s complete, but it’s being built to replicate the car as it was at last year’s event. 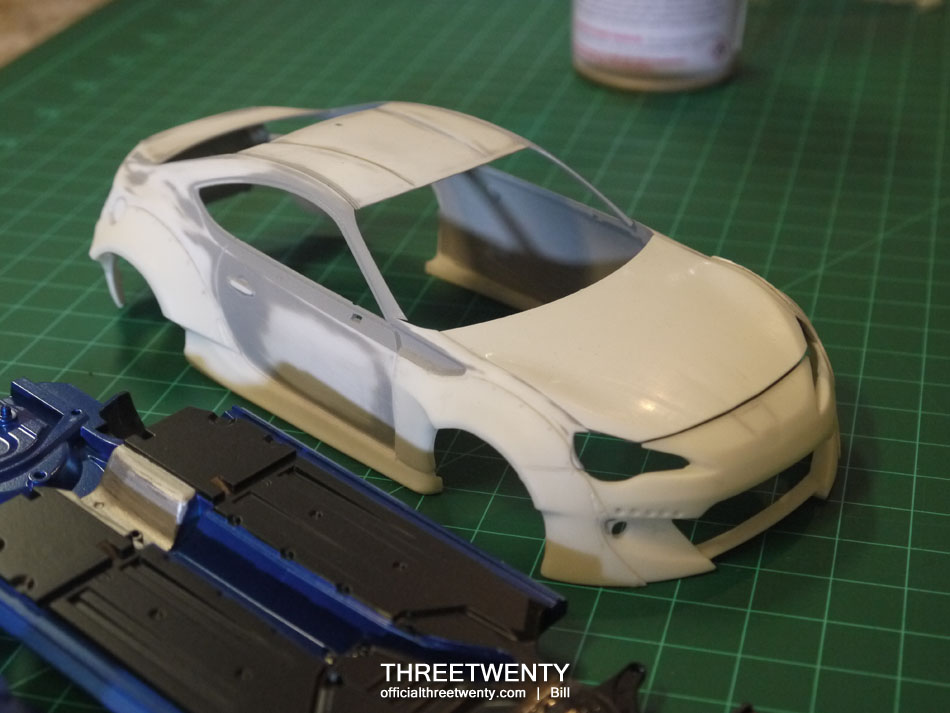 A transkit provided the RB V2 body kit, some wheels, seats, and other details. Just like real cars have an aftermarket offering parts for them, so do scale models. Companies produce parts (quite often cast in resin like these are) for specific model kits, ranging from small pieces like steering wheels, mufflers and air filters, to larger parts like wheels, engines, and full body kits. A number of well-known real parts have been reproduced over the years, from companies like Voltex, Liberty Walk, Work, and Bride.

As you can see in the above photos some painting has taken place, and the V2 kit (save for the wing, diffuser, and splitter) has been glued to the body. Minor bodywork still has to be taken care of but hopefully it can be in its final coat of primer before too long.

Since the V2 FR-S is being built as a scale version of a real car, my creative freedom is restricted. In contrast to it however, the V1 Bunny is not based off of a real build and I am therefore making my own choices regarding parts, colours, accessories, and so on. 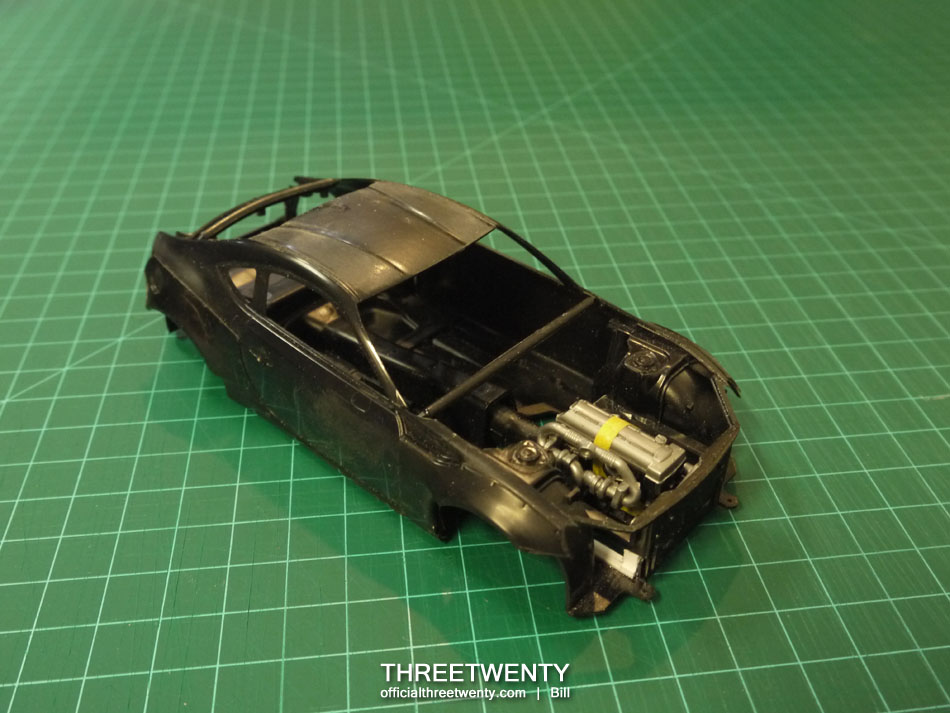 This was the second model to be started, and is the Aoshima Rocket Bunny kit which a few of us picked up from Speedhunters when they added them to their store earlier this year. It comes complete with the Rocket Bunny kit and a number of other aftermarket parts so the model can be built either as a stock car or an RB-equipped car using just the parts in the box. Obviously, I cut up the fenders and fitted the flares immediately.

While the Aoshima kit features some additional details as compared to Tamiya’s (like an opening trunk, which is rare on a model kit) it’s missing one big component; an engine. I’m not sure why they wouldn’t include one – especially when the hood opens, the engine bay is moderately detailed and there’s even a transmission as part of the kit – but it gave me a good reason to customize the car a bit futher. I grabbed a spare Supra kit that I had and took from it its 2JZ.

This car is still in the very early stages but it’s moving along well I think. So far the engine mounts have been built, the bay has been detailed a bit further to be more accurate, the kit’s driveshaft connects to the 2JZ’s transmission, and some additional bodywork is underway. The front bumper isn’t shown here as it’s currently being reworked a fair bit. I didn’t want to use the RB lip kit, instead opting to go a different route to make the car a little more unique. The parts I wanted aren’t offered in scale form so scratchbuilding is the solution.

Progress doesn’t happen fast but every now and then I find myself with some free time I can devote to these models so I sit down at the workbench and carry on. Hopefully you enjoy following the progress and seeing something a little different to the 1:1 projects.