At last I had the chance to attend a proper Grey Eagle meet! As the start time was approaching though, texts began coming in asking if I’d be going considering that the forecast wasn’t ideal. Apparently there were rather bad-looking clouds not too far away – it seems that bad weather on Wednesday evenings is an unfortunate pattern here so I couldn’t say I was really surprised. Fortunately though by around 5:30 it was still a beautiful evening so I hit the road and made my way over to the casino. I reasoned that if said clouds started making their way over to where we were I’d simply take that as my cue to head home but they never appeared.

It wound up being a great night and gave me the chance to run into people I hadn’t seen in a while and catch up. It also allowed me to take a decent amount of photos to share here, so let’s get to that!

Not long after I parked this S4 arrived and pulled in a few stalls further down the row. It seems to be a regular at the meets and is super clean with some serious performance to match (550hp/580lb-ft according to the spec sheet). As I was checking this out Rob arrived with the LS-swapped 240. 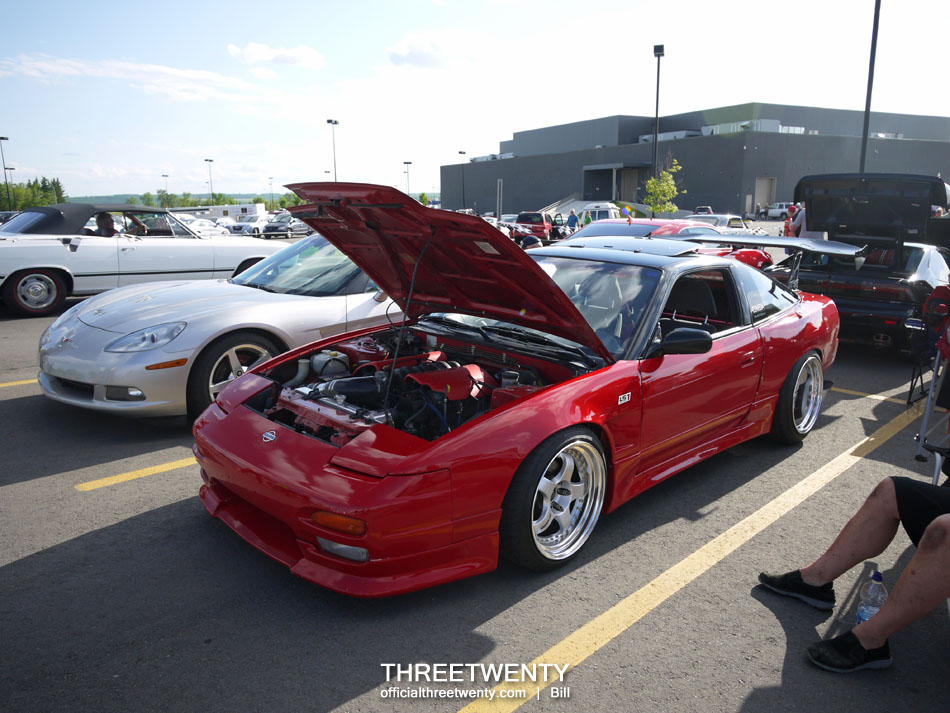 Coincidentally (?) it was parked next to a Corvette. 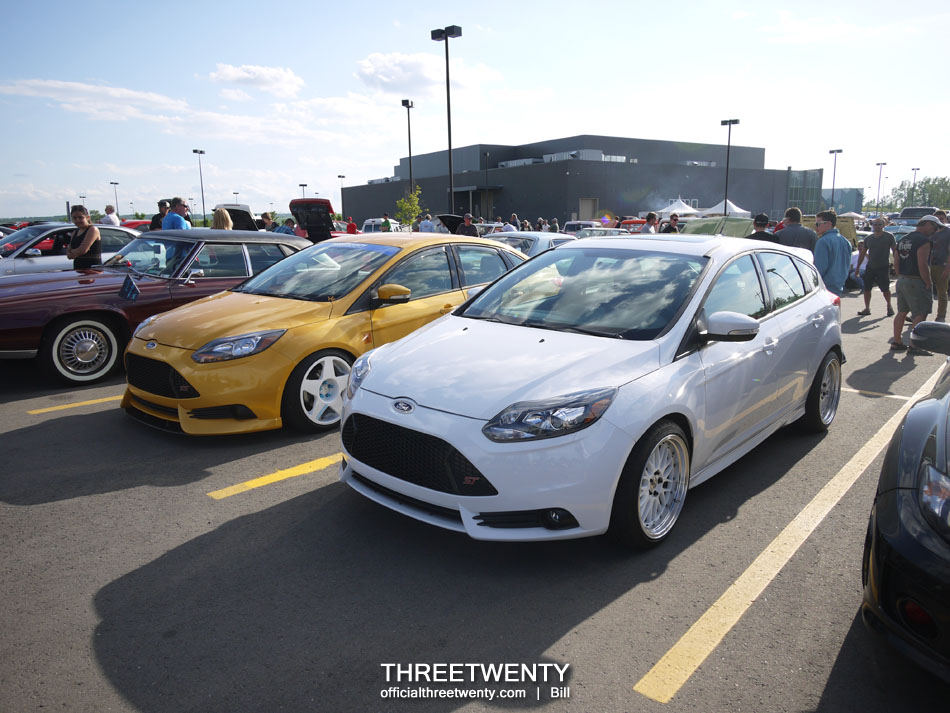 Brandon attended with Le Yeti since it was in running condition again. I really wish I had taken a photo of it when I last saw it a few weeks ago because it was on air, but I didn’t have my camera on me and didn’t know how short-lived the bags would be. Unfortunately the system was causing nothing but headaches for Brandon so it has since been removed and it’ll be lowered once again on coilovers, soon. It looked phenomenal on air but it was seriously impacting the car’s reliability. 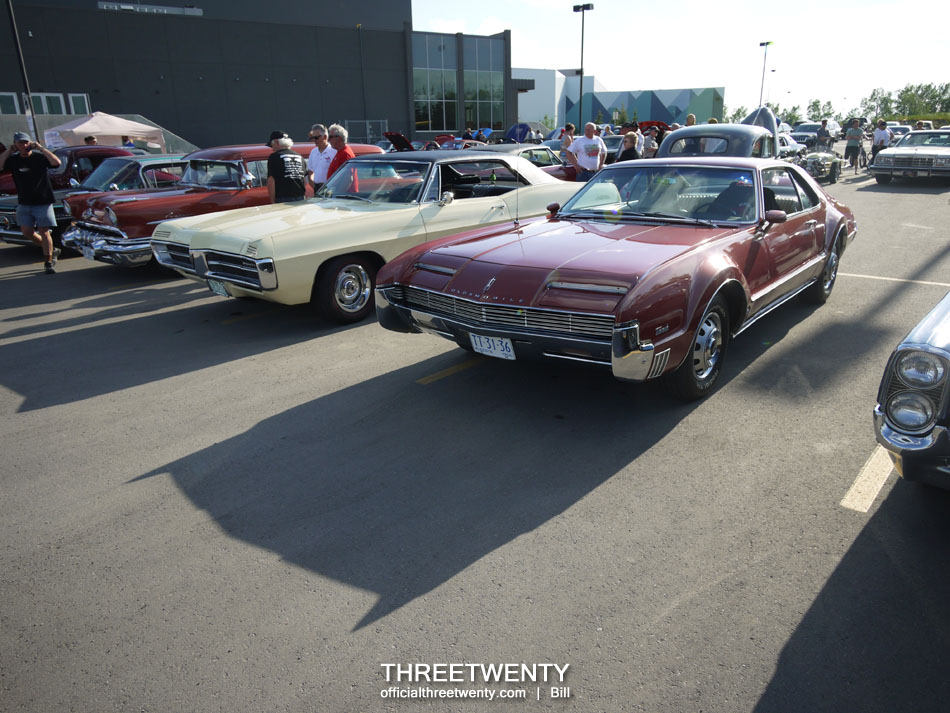 When I saw this Toronado’s shadow all I could think of was “I’m Batman!”.

I often get asked, by people who are considering attending, what kinds of cars are allowed/present. Anything and everything is fair game here, from classic muscle cars, to RHD imports, to electric and hybrid vehicles. It’s great to see such variety. 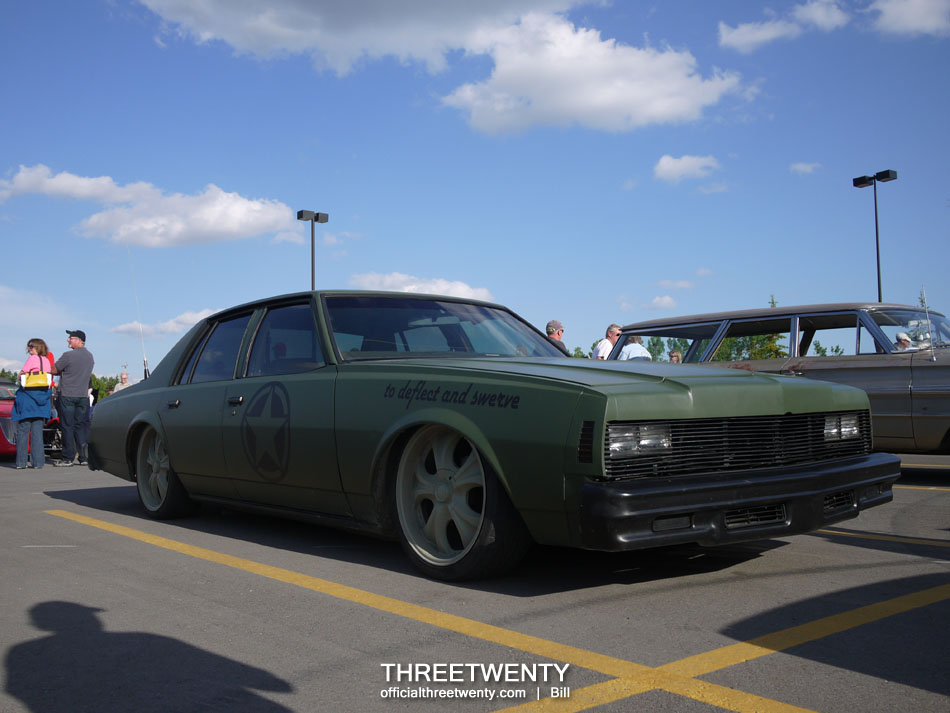 Brett’s ridiculous CTS-V was out enjoying the sun. Horsepower and torque are both well above 800. And more is coming. 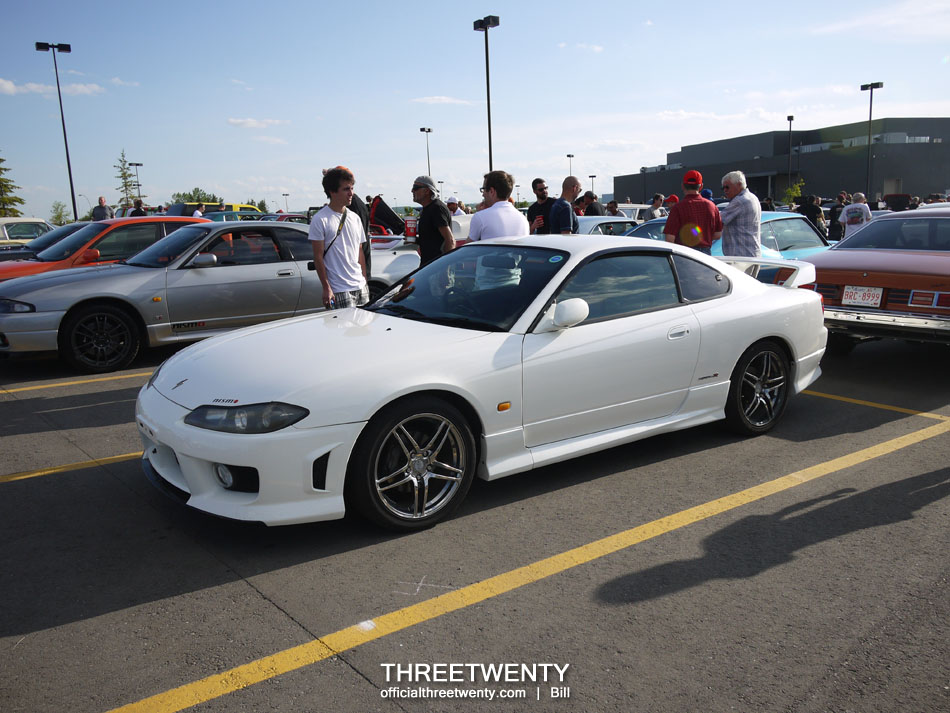 As always there was no shortage of beautiful machinery on display but there was one car in particular which not surprisingly, made a big impact and drew a steady crowd. As I was chatting with a few others not far from where the cars were rolling in, sometimes something driving by would catch our attention and we’d quickly switch focus to it (“Hey, look at that (insert car here)! Cool!”) before resuming the conversation. However, one car managed to enter the lot, drive by, and park without any of us noticing. When I finally caught sight of it I could barely believe it – not only was it crazy to see one in person, but I was probably more amazed that none of us had noticed it until that point – a Veilside Fortune RX-7!

Of course once I pointed it out we made a beeline for it. Naturally with it being so extreme opinions differ on this kit, but I have always been a fan. Personally I’d probably go with the two-tone colour scheme seen on Han’s car (real original, I know) but the grey was a nice choice.

For those wondering about the missing license plate – it had a notice on the windshield as it was still in transit. 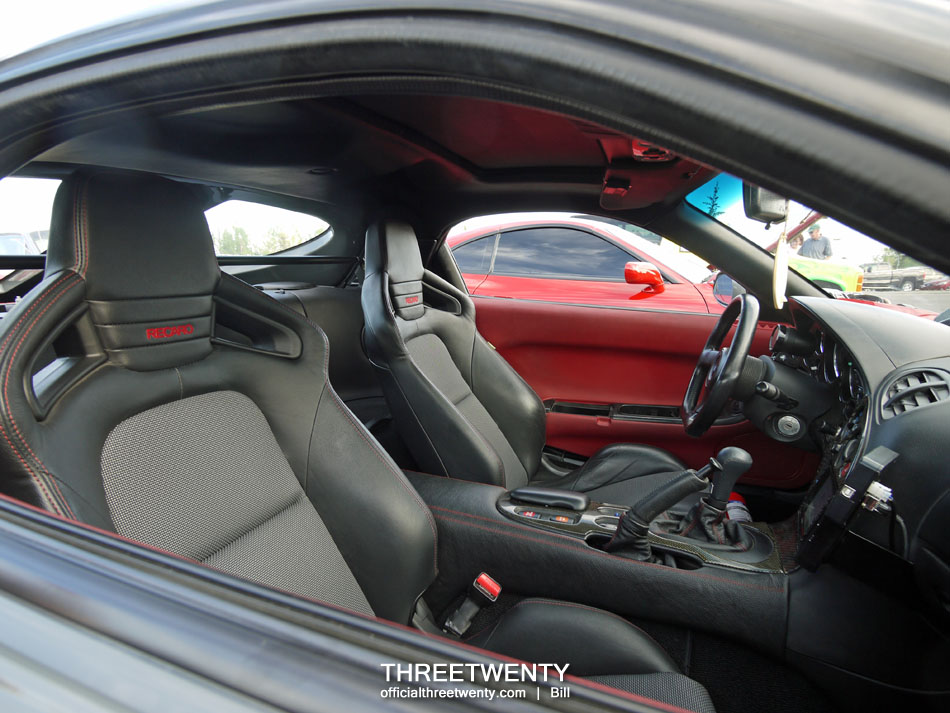 Looking past the exterior, this car had received some upgrades inside and under the hood as well. We were trying to figure out where the seats were from – we all felt they were really familiar and we were sure they were factory seats out of something, but couldn’t quite recall from what.

I see that one fellow here is sporting a Rotary shirt – I’m not sure if he was the owner or it was just a coincidence. I didn’t even notice at the time because my attention was pretty much completely focused on the RX-7.

Initially the car looked to be finished in a single shade of grey but as I looked closer I found that this one did appear to have a subtle two-tone after all. If you look carefully you may notice that the center of the front bumper (and it looks like the recessed areas on the sides as well) are finished in a slightly darker shade of grey. I couldn’t type that last blurb without thinking it’d be the perfect place for a 50 Shades of Grey joke, but I’ll pass.

It was amazing to see one in person and finally get the chance to really take in the details. Having the kit alone would have been impressive enough but finding out it also had interior and engine work on top of that made it even better. This is one to keep an eye on.

Normally a beautiful Supra like this would be attracting a lot of attention, but being parked next to the RX-7 it was almost ignored by comparison. For me the fact it’s LHD makes it even more impressive as nearly every single one I run into here is RHD (in fact there’s one at the end of this post). Not saying there’s anything wrong with that though.

Dustin’s S15 was present once again with a couple of S14s. The purple one on the right actually belongs to his fiancé! 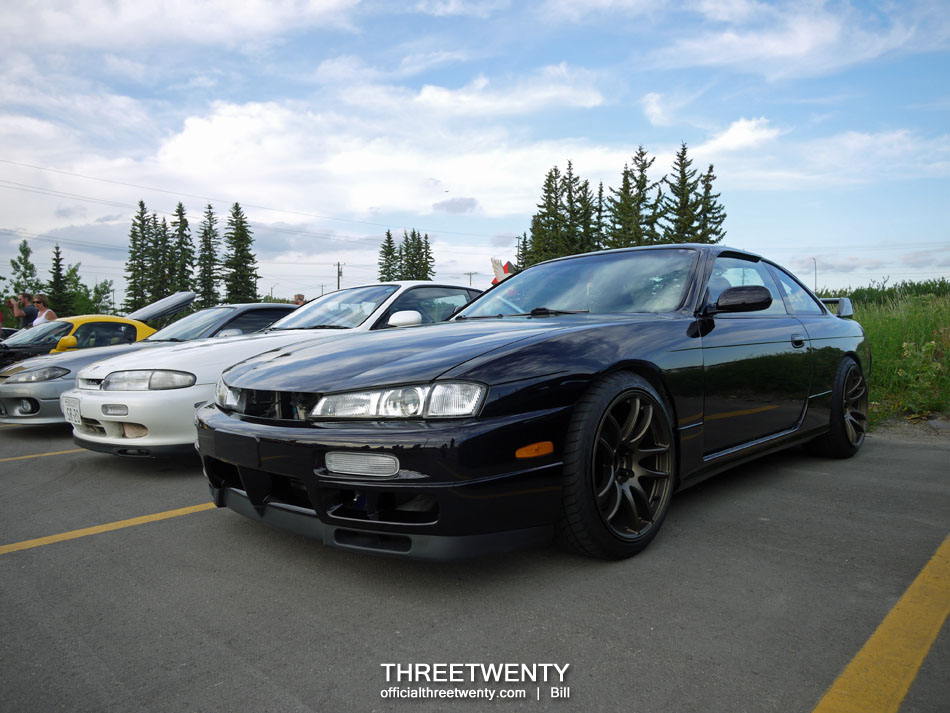 The S14 went from so innocent-looking (Zenki) to downright pissed off (Kouki) with the model’s facelift. 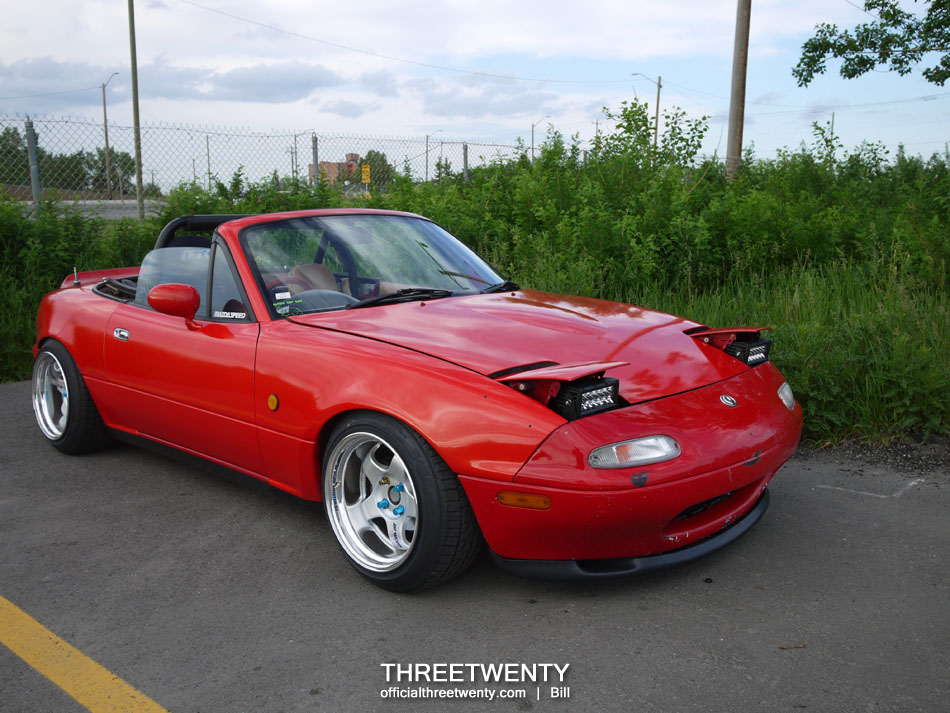 I found Marshall’s MX-5 parked over in the corner. I like the use of the mini headlights which allow for the sleepy-eye look while surely providing more light output than the originals could ever muster. 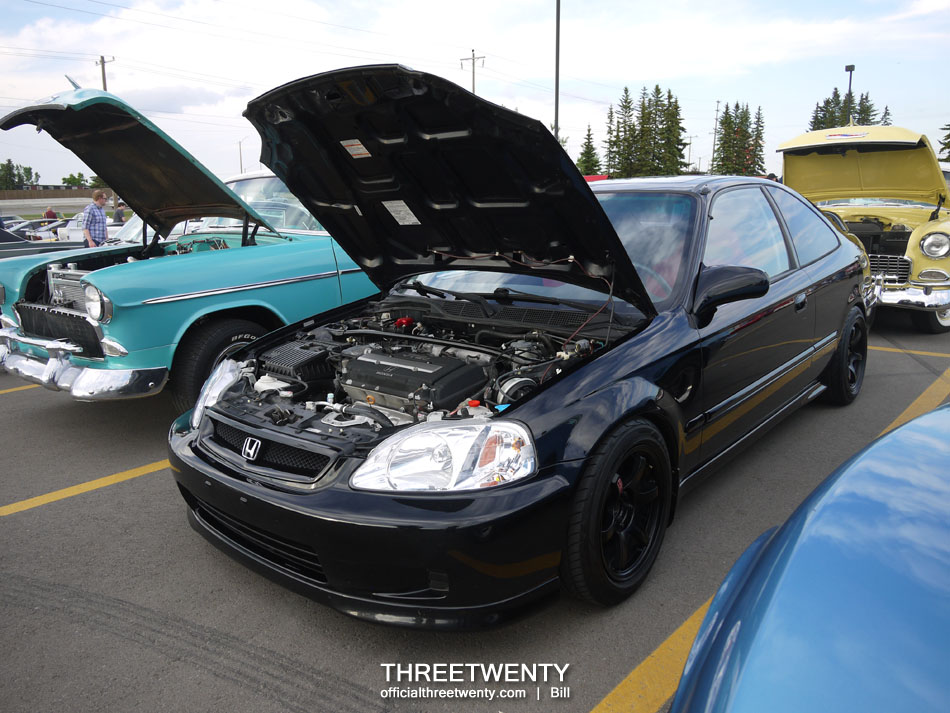 This Civic was super clean – check out the paint and how straight the body is! (What looks like a dent in the fender is actually just a reflection). 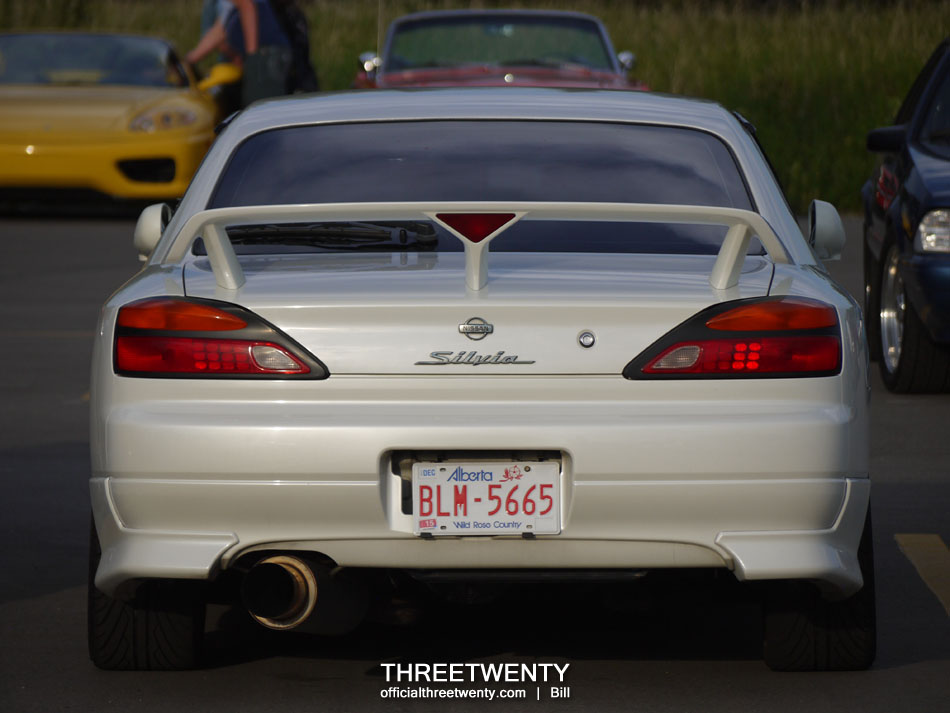 This is the same S15 from earlier in the post, shot this time with a telephoto after the lot had started to empty. I’ve always thought the triangular third brake light built into the wing was really cool.

Last for today, captured as I was just about to leave, was this really tasteful Supra; the RHD one I alluded to earlier.

I made my way over to it to quickly check it out in better detail, before heading out to grab a late dinner and make my way back home.

Coming next is a post that I know people have been waiting for – the fitting of the Focus’ ST Sedan valance and 3D Carbon wing. There have been plenty of photos of the finished pieces, so it’s time to show what went into prepping, painting, and fitting them. For anyone considering one or both of the parts, it’ll hopefully answer questions you may have about the installs.