Seeing as how the last 9 posts on the site – the content from the last 4 weeks now – have been show and meet coverage, I thought it was time for something different so today we switch to a project update.

As you would have seen in the Driven coverage, the Balance Auto (Jackie’s) Integra Type R had its turbo setup finished – at least physically finished. It still needed some more tuning so recently he had it over at Blackbird Technical Service; they had already done some fabrication work on the car in fact (hood exit and charge piping) and this time around had it set up on the dyno to get it dialed in and measure the power levels.

I was out that evening so could only swing by the shop a bit later, after the actual dyno runs had already been carried out. I arrived to see the car still set up on the dyno though, before it was taken off and then rolled out for some testing.

It’s been noted before that Jackie wants 400+ WHP and while it hasn’t reached those numbers yet, it hasn’t been run on high boost either. It recorded 370 on 11 psi but reportedly the aim is 21 pounds when all is said and done. It should be a mental car; actually, it is a mental car even at this stage. And it already shoots fire, so there’s that.

There were a number of us at the shop that evening, and we all hung out for a little while as the guys were finishing up with the car; I grabbed some photos of it to share for this update, switching to video once it was back on the ground and ready to go for a couple of test drives so that you all could see and hear it in action as well. The thing sounds mad in person and when provoked it absolutely flies. In fact, following this tuning session the car was run around Castrol Raceway and it already unofficially holds the FF record for the track – it’s just waiting to be timed with proper gear to make it official. It also laps the track less than a second slower than a Viper ACR which is nuts. Not bad for a 20-ish year old turbo Honda on “low boost”!

Anyway, I’m sure you want me to get to the photos now, haha. When I arrived I saw that the guys had the shop door half shut to keep the setting sun out, showing off the unmistakable back end of the ITR.

With the bumper and hood off all of the new turbo goodness was on display for photos. Check out that custom intercooler piping; you can also see here how the splitter and bumper quick releases are mounted. 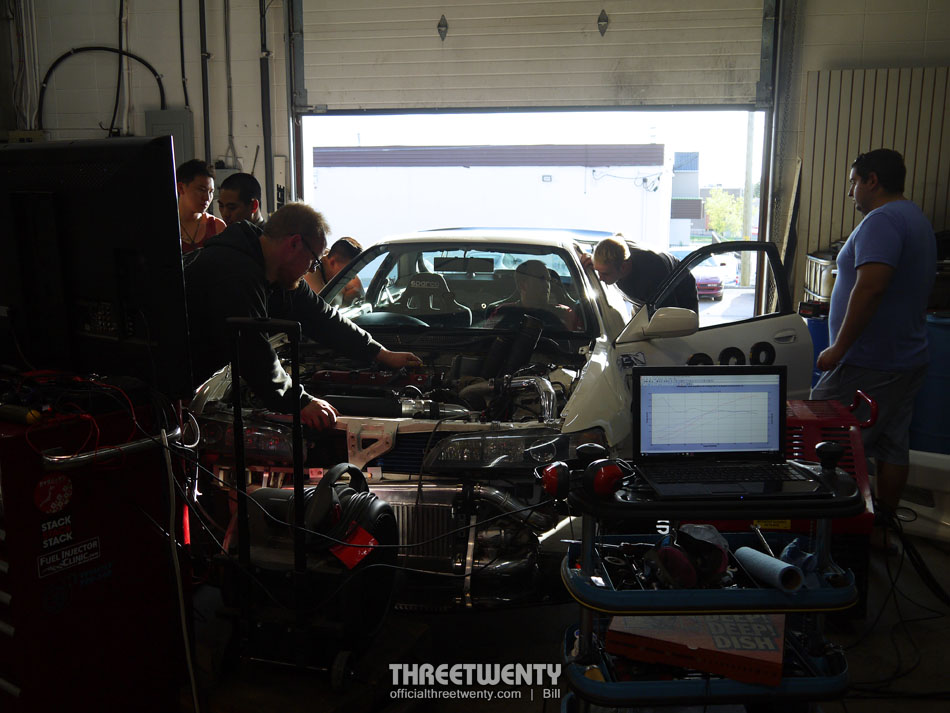 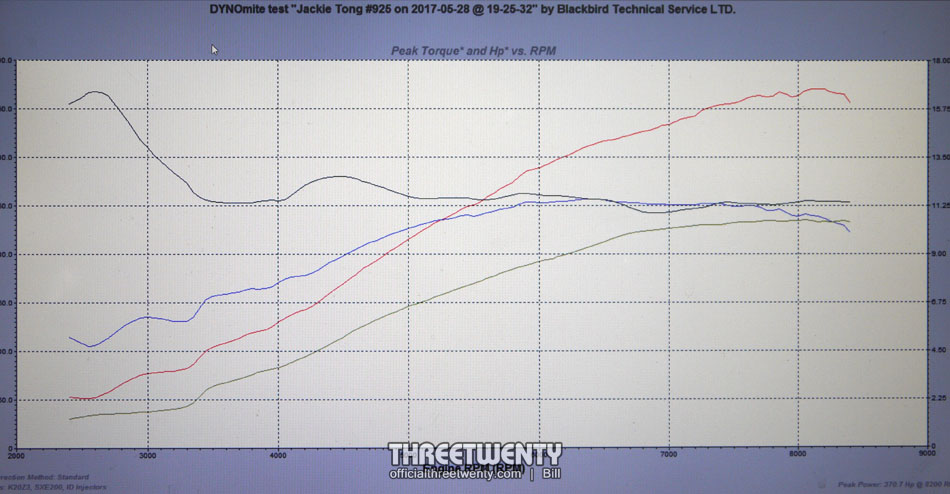 Fortunately the dyno chart was still up on the computer so I could grab a shot of it for you all – to be specific the car made 370.7 horsepower at 8200 RPM. 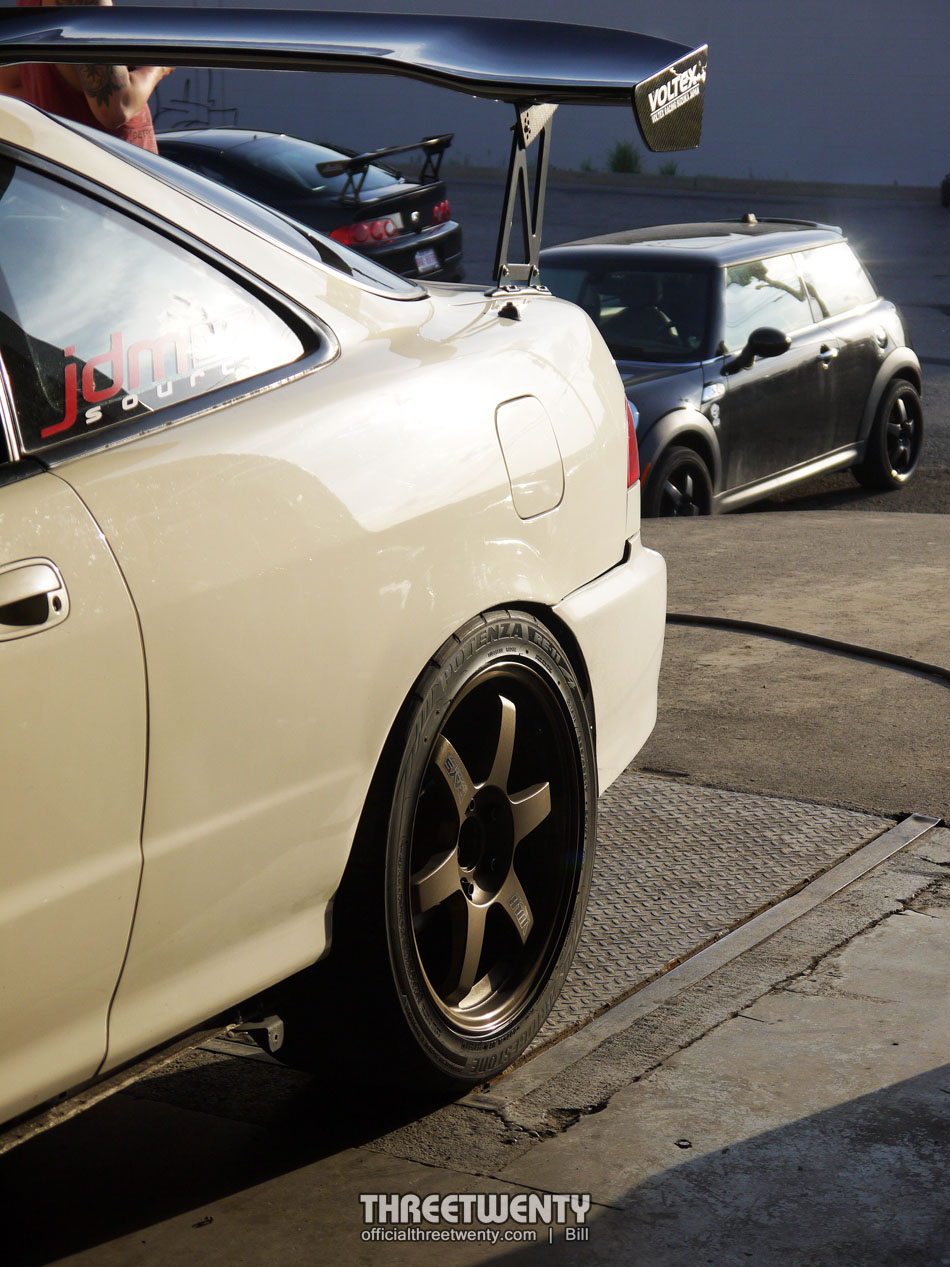 You may notice in a few photos that the PCI side skirts were off too – this was to make room to get the jacks under the car. Fortunately they quickly attach with just a few bolts.

Jackie’s wasn’t the only Integra around, naturally. I got to see Punit’s for the first time in a little while which was nice; he’s had this thing forever and it remains one of my favourite USDM-front Teggys. Normally I’m not the biggest fan of the quad headlights but the front end suits his perfectly and helps it stand out.

Punit had to head out early, but outside it still might as well have been a Honda owners club meeting with how many were around. Alex’s ITR was sporting its new race numbers, which he and I had applied earlier that afternoon when he stopped by my house.  Also new on his car were the splitter and winglets up front, and the lip had been changed to black. Since these pictures were taken Jackie’s old rear diffuser was also installed. 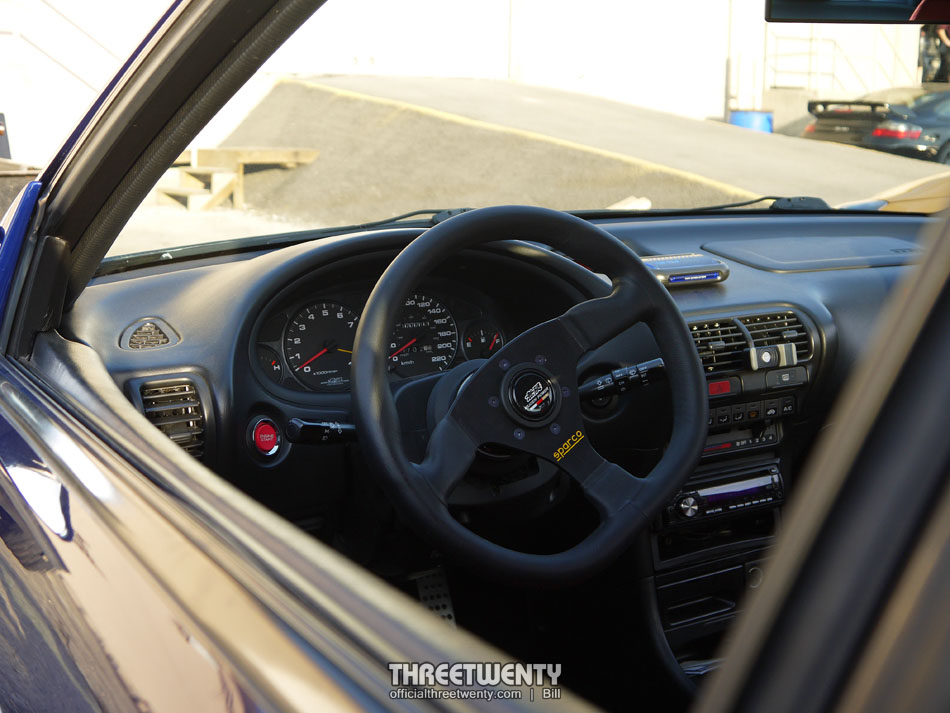 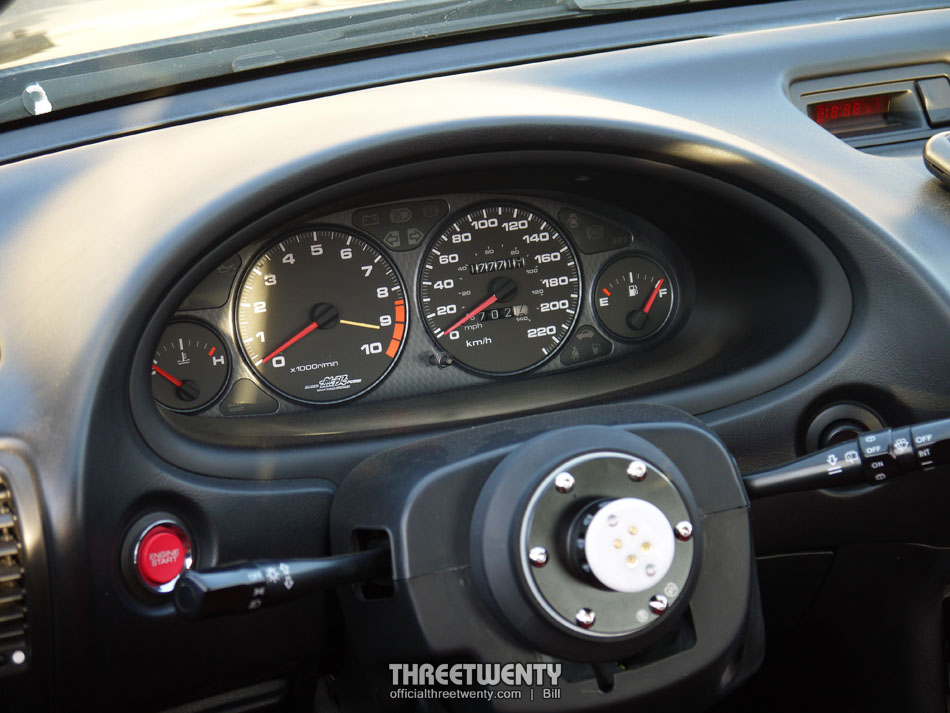 Inside was a new quick release hub; and note the reminder on the cluster of where the real redline is now.

Alex told me to hop in and this was my first time sitting in the driver’s seat of an ITR! I had ridden shotgun before of course but never sat on this side. An ITR is definitely on the car bucket list. 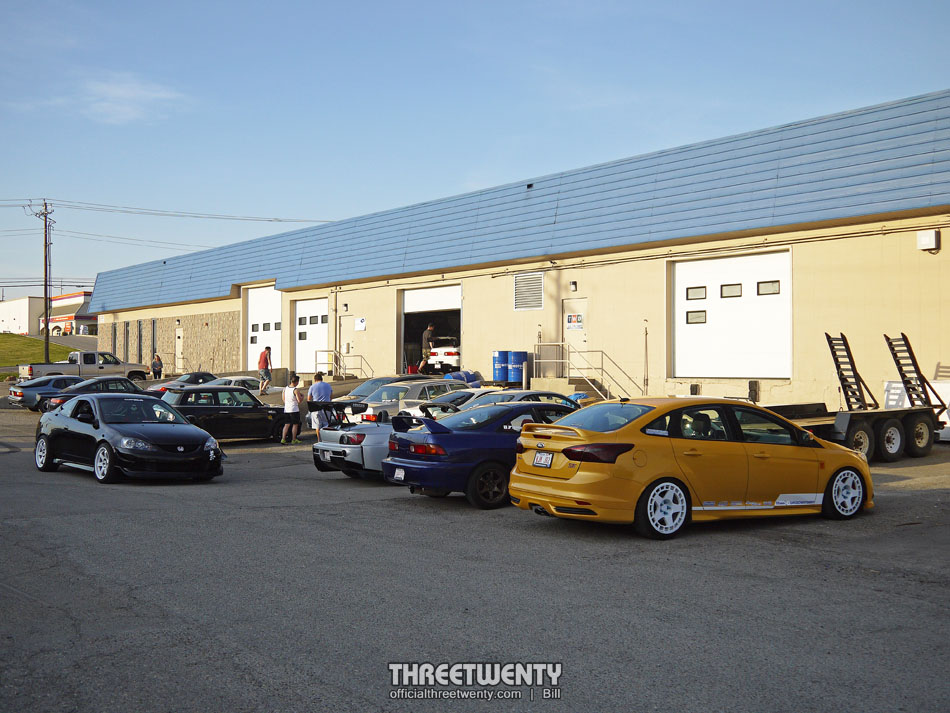 Isaac’s Authentic Powerhouse Amuse AP1; the TEs and Voltex wing are new additions under his ownership. Even as crazy as the car was with the kit and just a lip spoiler, the Voltex wing transformed it again and made it even more aggressive – the black TEs helped too.

I feel we don’t get to see enough RSXs built up. This one was quite nice but you guys should know that anything with a half cage/roll bar gets my attention anyway, haha.

Parked against the wall of the building were Errols’ ITR and Brad’s EM1 – of course both on TEs. The Amusing Plate on the ITR was carried over from the Amuse S2K (when it was Errol’s) but is still appropriate – though less punny – for the ITR.

A quick look at Brad’s interior because I don’t get to see the car much. With Brad it’s always function first – highlights include the retrofitted aftermarket tach and gorgeous shifter. He didn’t overlook details though, such as having Mugen bolts on the block-off plate. 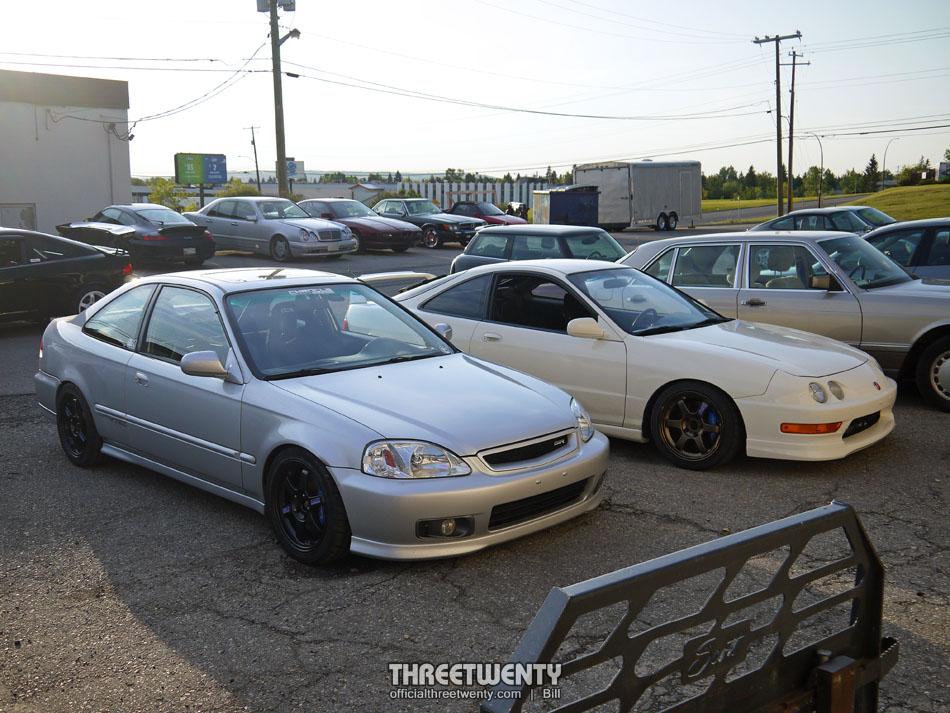 Fronts of the cars now. Functional stances, simple OEM+ exteriors, and quality parts throughout both. Brad’s is also K swapped for those unaware.

The front of Isaac’s Amuse AP1 now too; this angle naturally really shows how wide an S2K becomes with the kit; it’s quite an increase!

Back to Jackie’s ITR now; the setting sun only helped to highlight that mad diffuser. I still laugh every time I see it, at how the plate has to be mounted to it now because so much of the bumper was cut out. 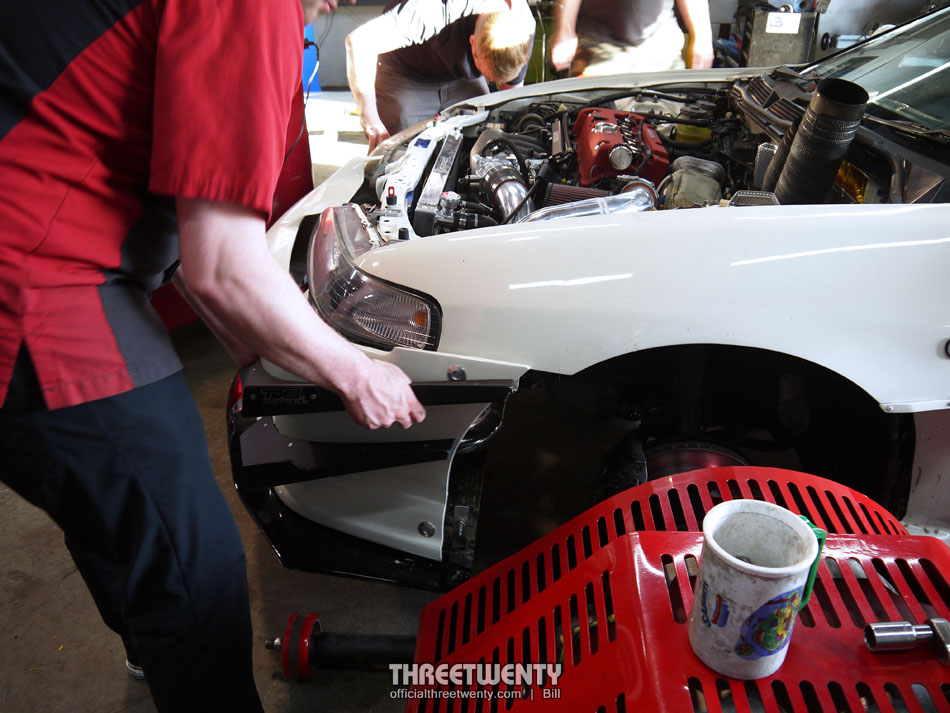 Back inside, it was time for the ITR to be taken off the dyno. The front bumper went back on first; being held on with the quick releases it was a snap (ha) to reinstall. It was nice to see that the canards are also useful as handles for moving the bumper.

A shot of the inside, above the diffuser, for those curious. As shown in the last proper update on the car the tire well was cut out to make room for the diffuser so a new flat section was welded in and sealed to replace it. Also out back is the battery in a battery box; its old home is now occupied by the exhaust and screamer pipes.

At Driven the car was shown sans hood so we hadn’t seen the finished cutout for said pipes. Because Jackie is Jackie, even the trim piece was held on with Mugen hardware because why wouldn’t it be? The next time I’m at Balance I should check the furniture in the office and see if it’s all held together with Mugen stuff too – I genuinely wouldn’t be surprised if it was.

This was definitely one of my favourite shots of the night. This is the best way to spend a summer evening if you ask me. A bunch of friends hanging out, talking cars, and working on a project.

With the wheels back on and car down on the ground, it was time to reinstall the PCI side skirts as the final step. Again, Mugen hardware was used.

I made sure to get a shot of the underside of the hood’s cutout, but perhaps more importantly, check out the custom burnt Titanium hood prop – these pieces almost make me want to remove the Focus’ hood struts and go back to a prop rod. Haha 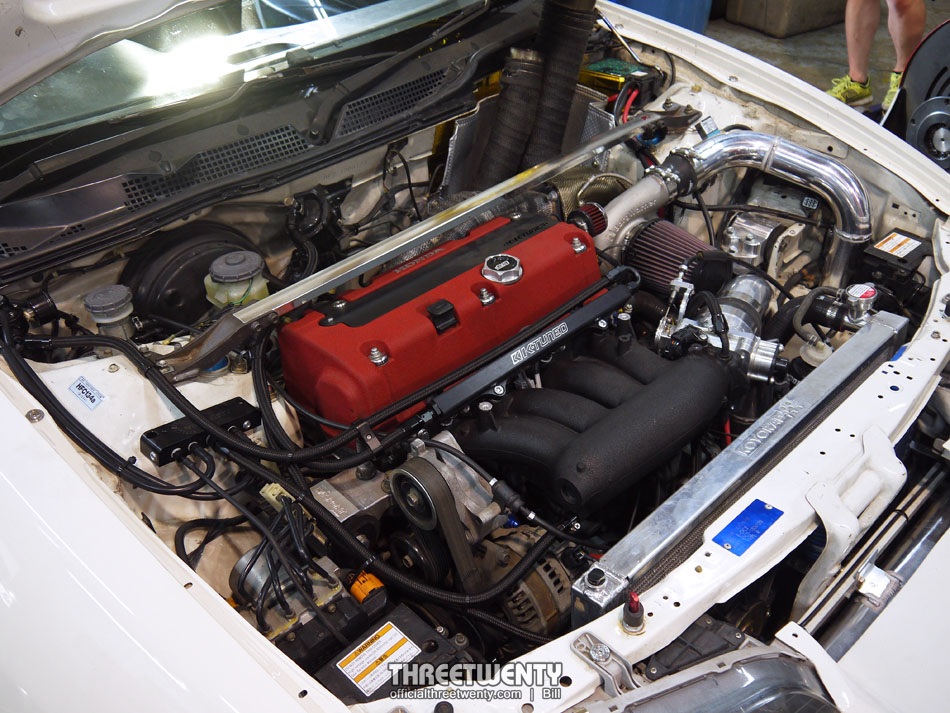 With the hood still open it was a good time to get another overall shot of the current engine setup. K20, BorgWarner custom turbo setup, RBC manifold, K tuned throttle body; the list goes on. It’s almost strange to see the stock strut bar still there, surrounded by everything else.

I also made sure to take another look at the cabin – AiM digital dash, auxiliary gauges flanking it, carbon fiber block off plate, quick release…Jackie has made this a nice place to be.

At this point it was time to roll the car out for a quick run around the shop, so we got to see all of the gauges lit up. That AiM unit is just oh-so-nice.

As mentioned at the start, this was when I switched to video, and instead of having it at the end of the post – though we almost are by now – I figured I might as well throw it here, more or less in order with the photos. Turn up your speakers for the start!

Back to the photos now, with the car having finished its test runs and sitting outside as we all got ready to leave Blackbird. It’s so aggressive looking; seeing this in your rear view mirror on the track must be intimidating. When we all rolled out and Jackie was coming up beside me I never got a proper look at it in my mirror because, well, let’s just say he wasn’t there for very long (I might as well have been driving a golf cart with how much faster this thing was). 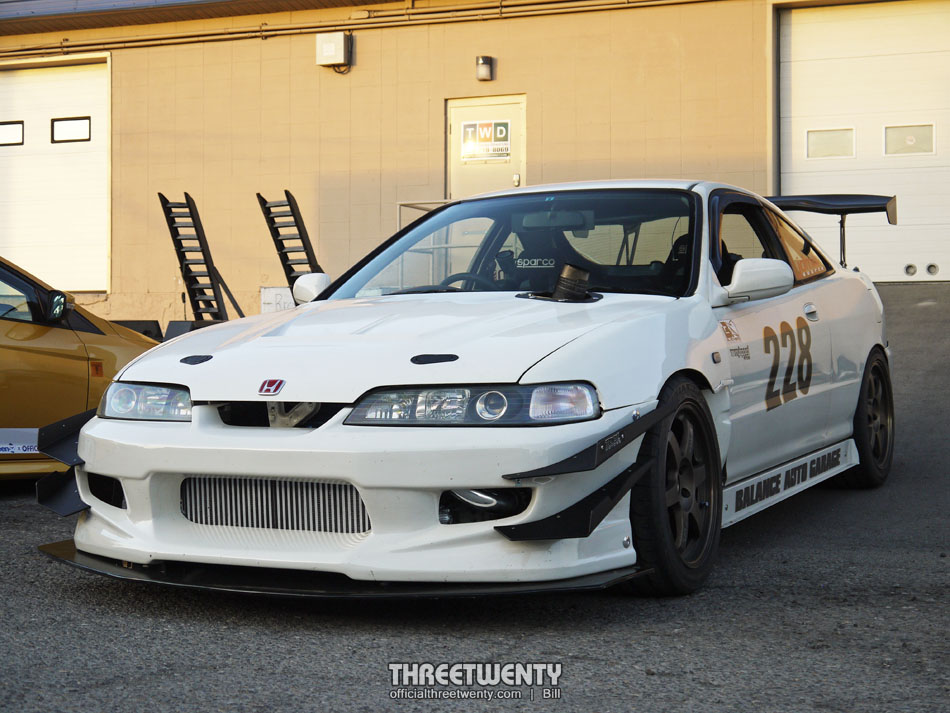 In case you were wondering regarding the hood dump, Jackie does have to keep the passenger window up to avoid fumes. Haha. RACE CAR!

And finally, to close out today, a full shot of the cockpit with the wheel in place even – ignore the random wire hanging from ceiling . As nuts as the car is, the (front half of the) cabin still remains a rather nice place to be but I imagine it won’t be too much longer before this area of the car is turned up to 11 as well. If you didn’t know, you could even be forgiven for thinking this was the interior of a much milder ITR; from this angle it doesn’t hint terribly much at what kind of animal the car truly is.

So there it is, the Balance Auto ITR as it currently stands! From here it’ll keep seeing track time – hopefully setting an official record before long – and then it will just keep getting crazier as Jackie and the guys from Blackbird get it set up for that planned 21 PSI and build the chassis up even more. More power, more aero work, and probably more Mugen bolts – all to come!