A few months ago in one of Selsun’s updates we covered the install of Boomba’s solid shifter bushings; specifically, those for the transmission’s side of things. It was noted at that time that the shifter assembly’s bushings were ultimately swapped out as well to match, and it is that install with which we start today’s post.

As a super quick refresher – or intro to those not familiar with these pieces – these were designed to take the small amount of slop out of the factory shifter assembly. Both the shifter itself as well as the cable bracket mounted on top of the transmission are isolated slightly via rubber lined bushings. In reality all these do is slightly dull the feel of shifting gears because a small amount of the force applied to the shifter ends up moving the bracket or shifter itself instead of just the cables; by solid-mounting these components to the transmission and floor of the car each gear change feels that much more solid and defined. Considering how inexpensive these parts are and how noticeable the effect is it’s no wonder that we always fit them to our cars, and almost immediately too.

Various manufacturers produce these and we’ve turned to a couple of different sets over the years but for Selsun’s shifter Mario opted for Boomba’s blue bushings (he had gone for the natural finish for the transmission bracket). Even though they’re pieces which won’t ever be seen once installed it’s nice to be able to pick from a few finishes to best suit your car, and I must say the bushings matched the paint rather well… 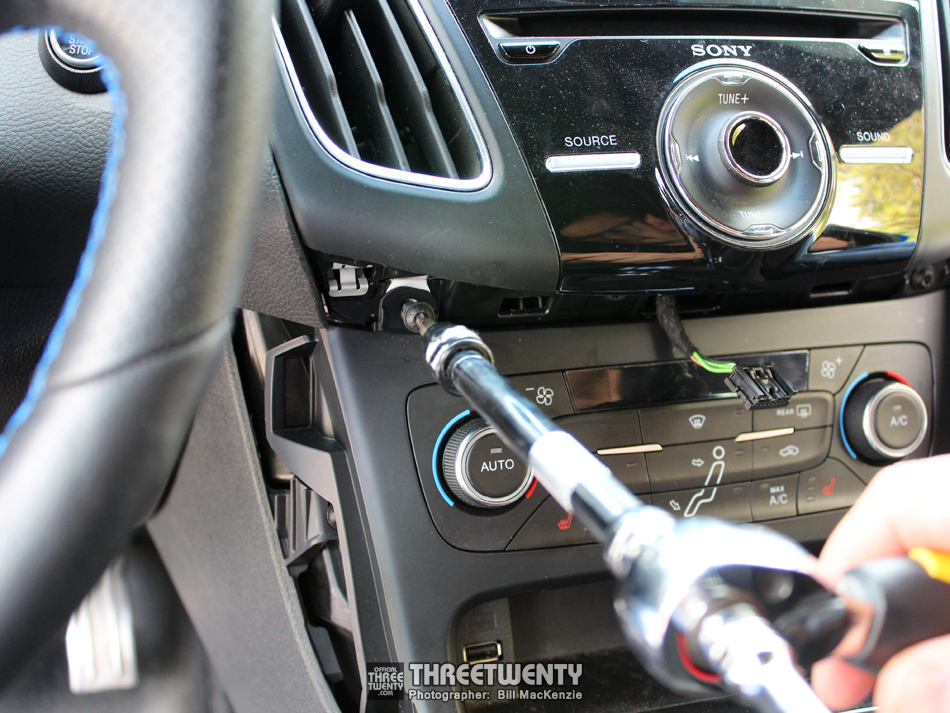 Anyway, on to the teardown. We’d pulled apart Mk3 consoles countless times by this point, but to be fair they were all in pre-facelift cars. We had to do a bit of exploring this time around to find a few hidden screws for Selsun’s Mk3.5 console, but it wasn’t long before everything was undone and it was ready to pull. 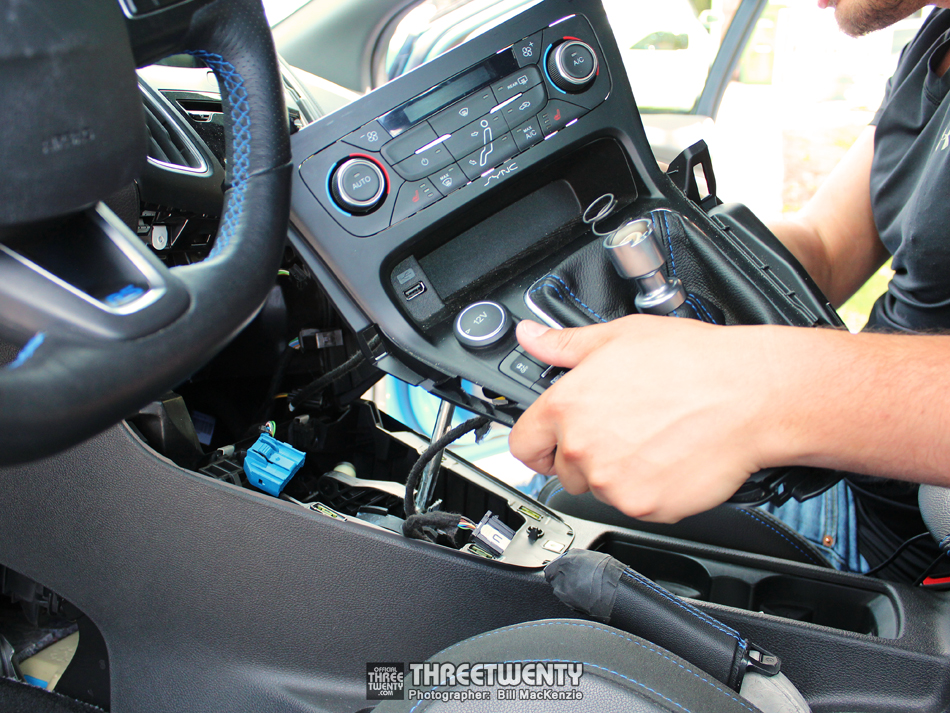 As always, this is one of the worst installs ever in regards to how much of the total time spent is just for teardown and reassembly. The bushings themselves take two minutes to swap out; getting to the bushings (and putting everything back after) takes considerably more than 2 minutes. None of it is difficult, mind, it just takes a little bit of time.

Side note, in case you’re wondering about the tape on the e-brake: the button had developed a bad rattle and this was a super-quick fix until we were able to properly tighten it up while we had everything apart for this install.

With the console removed the shifter assembly was fully exposed and ready to receive the new bushings.

The OEM pieces were promptly removed, tossed in a Ziploc, and added to the ever-growing pile of factory Mk3 shifter bushings in little baggies in my garage…

There wasn’t really a need for Ford to isolate the assembly from the factory, but it gives us one more little thing to do to make these cars our own.

With all of the original pieces removed the new Boomba bushings were then put into place with the factory bolts quickly following before any of them had a chance to slip out and fall under the carpet – which they love to do. That happened way back when we fitted these to Ketchup and Mustard and I’m pretty sure half of the total time spent on the installs that night was just to locate where the one escapee had gone.

With the shifter assembly securely fastened down the console and all of the associated trim panels were put back into place so that the install could be called complete! Combined with the transmission bracket bushings and new shift arm installed previously Mario now had the RS’s shifter set up just as he wanted it; they were all fairly small pieces but especially considering how much the shifter is used the results were well worth the time and effort.

It could be because it’s 2am when I’m writing this, or maybe I’d struggle to find a smooth transition from shifter bushings to this next “modification” even in the middle of the day with a full pot of coffee ready to assist. Either way, we’re going to now move to the exterior of Selsun for another tweak Mario made which is worth highlighting here. In a way this could be seen as similar to the shifter bushings when you consider the amount of effort required for what is a seemingly small change, though this one provides no improvement to the driving experience or performance of the car and rather is solely for looks.

For anyone who owns a non-ST/RS Mk3, debadging it is practically effortless. A bit of dental floss and some goo-gone and the emblems will be a thing of the past. For STs and RSs however it’s a bit more involved given that Ford also fitted badges to their front grilles. Of course you could simply remove the badging and call it a day, but the job wouldn’t quite be complete at that point. 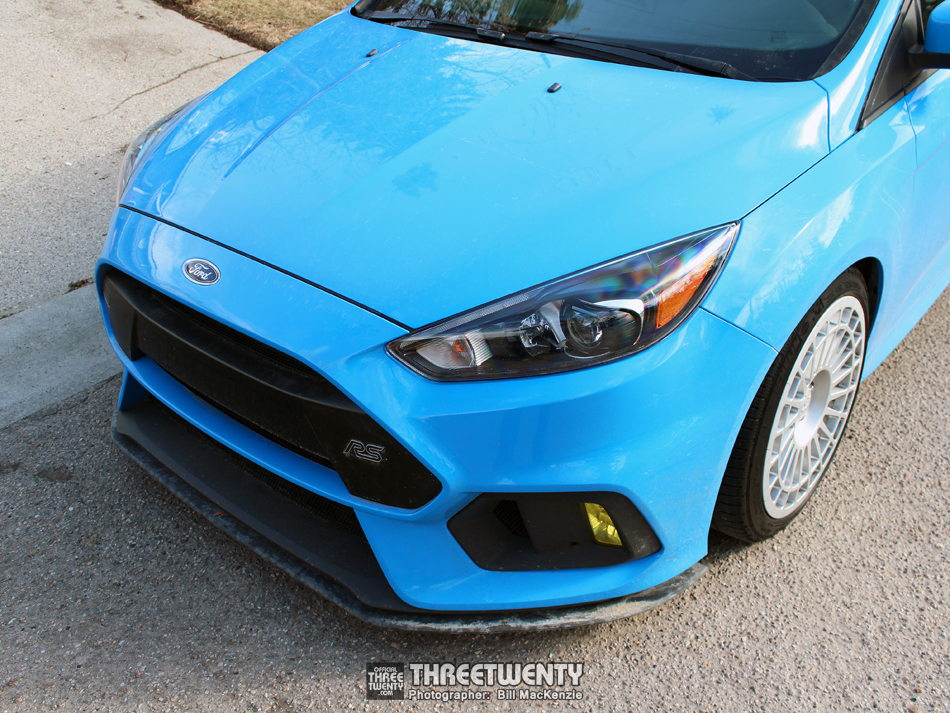 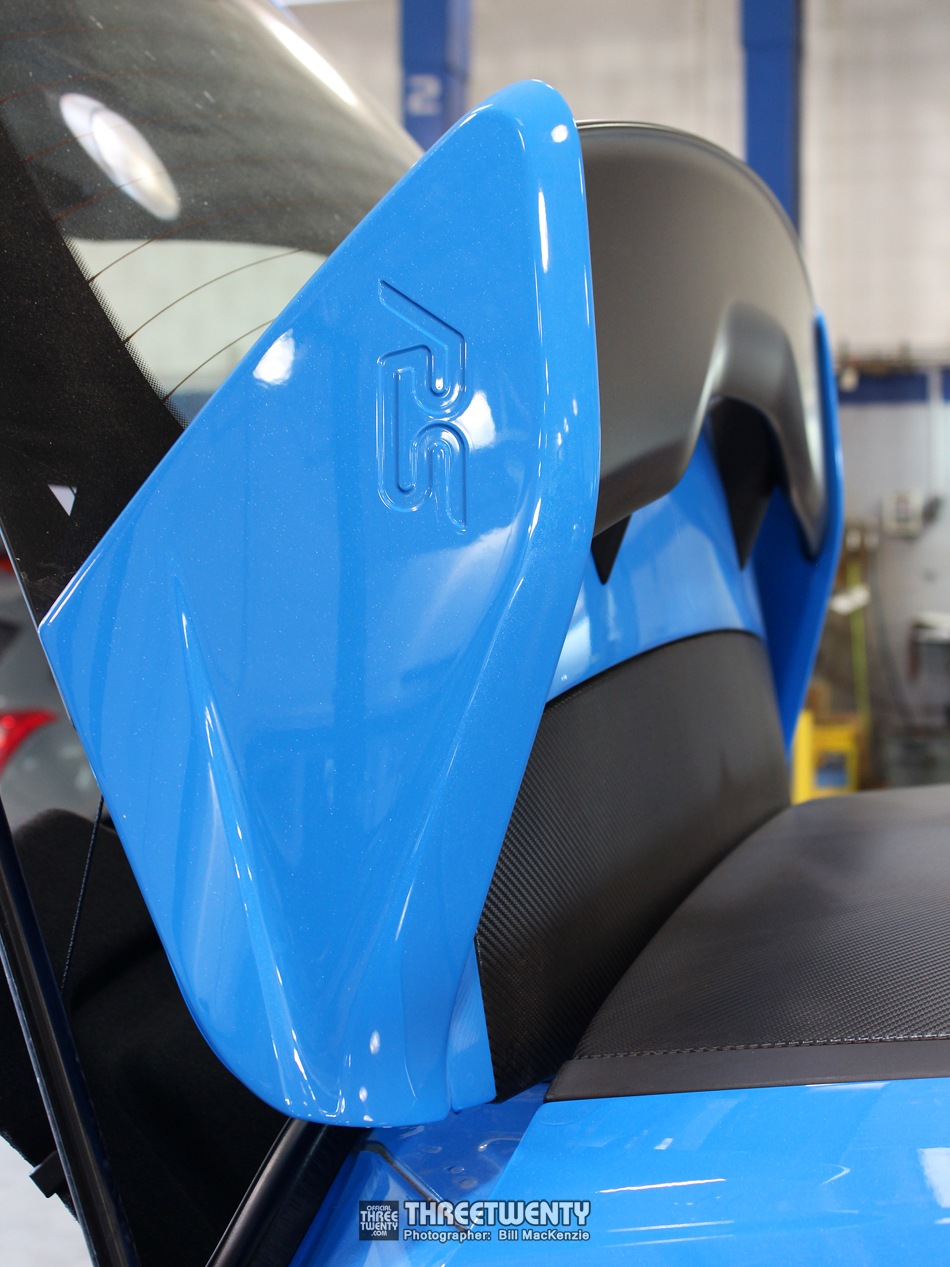 For the RS specifically Ford designed the front emblem to sit within a slight recess in the grille (or garnish, trim piece, whatever you want to call it). With the badge removed the look is similar to that of the rear wing with its own embossed logos so you could argue it doesn’t look completely “wrong”, but regardless Mario had other ideas as to how he wanted to finish Selsun’s debadge. 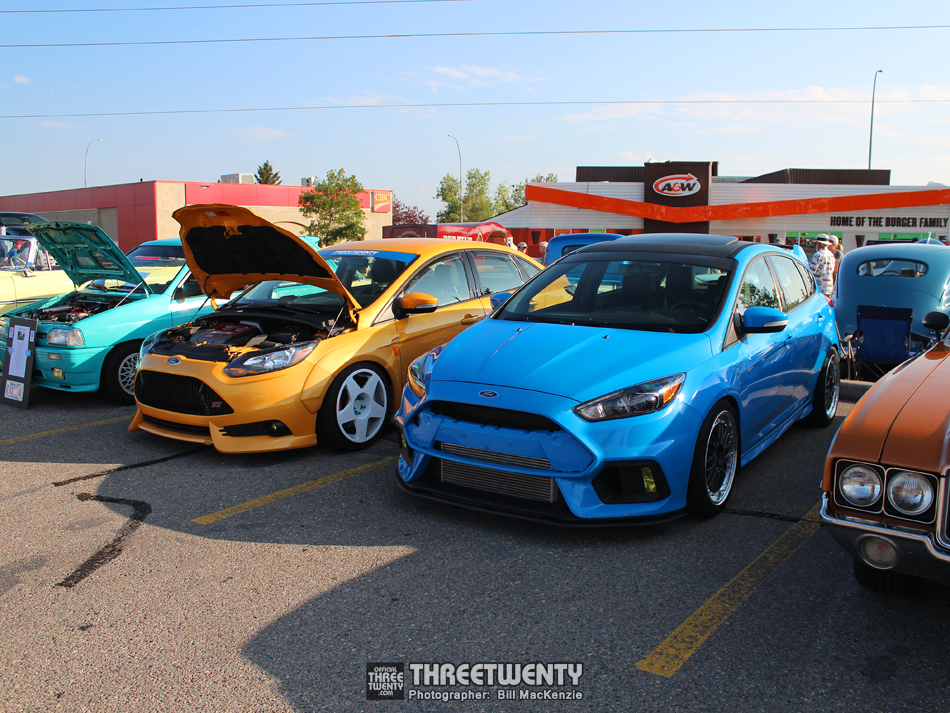 Briefly during the summer the blue hatch could be spotted running around without the panel installed in its front bumper, and that’s because Mario was dusting off his bodywork and paint supplies to properly fill and smooth the recess.

Rather than use an excessive amount of filler, the bulk of the void was first filled with a piece of styrene which I cut to the shape of the RS emblem and we then bonded in place – a basement full of model-building supplies comes in handy for the real cars from time to time! Once the glue had set bondo was then used to fill any remaining gaps and level everything out before the piece was primed and refinished.

One thing we had noticed with Selsun prior to this was that the grille’s original finish was already showing moderately heavy signs of aging from being pelted with rocks and other debris during winter. Mario therefore turned to an old favourite which he’d used on various splitters in the past – bedliner – to coat the grille with. The fine texture ties in with that of the other plastics on the front of the car and it’ll certainly hold up to our climate and conditions better than the original finish could ever dream of. 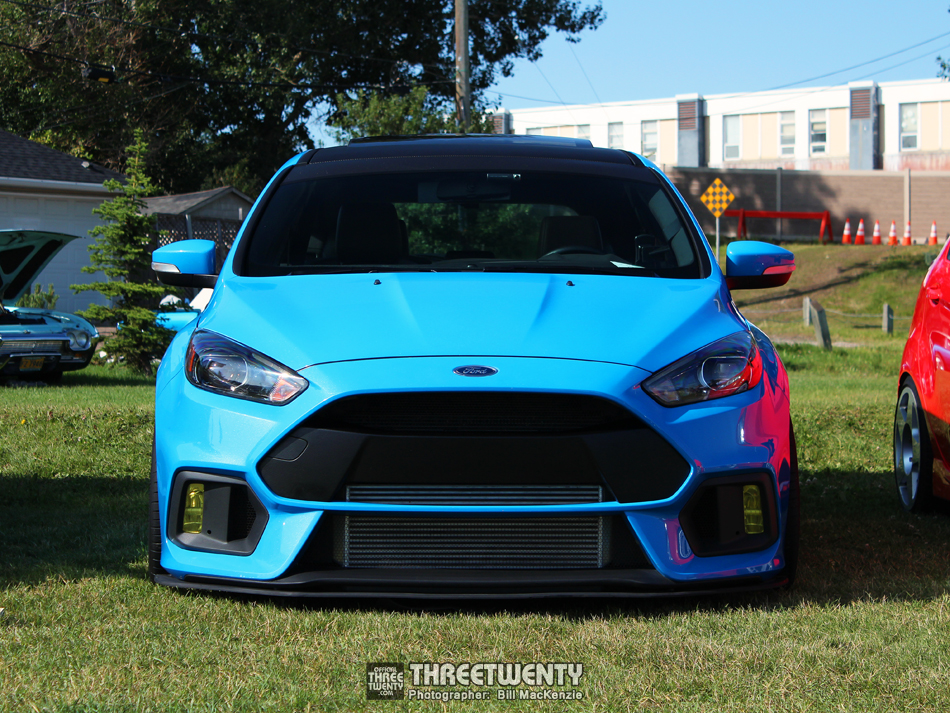 Fully removing the front emblem from Ketchup or Sriracha would never have been easy given the design of their grilles – with the honeycomb being broken up by an ST-emblem-shaped flat spot – but the RS’s design makes a complete emblem delete a much easier DIY job. It still takes a bit of work and to some it may seem like too much for such a small difference, but these little tweaks add up.

There are still a couple of small changes to cover in more detail on the site but Selsun as you see it in these photos is very nearly how it sits today (aside from the obvious switch back to winter mode). Tomorrow marks 9 months since Mario took ownership and the blue hatch has certainly become his blue hatch, but it’s also remained relatively tame as he had promised it would – if a Stage 2 RS can be called tame. Let’s see what 2020, and the second season with the car, brings!