As shown on our Instagram recently, I found myself up in Edmonton once again. On short notice, again. For car parts. Again.

I’d seen an ad on Kijiji for some rather tempting 5×108 wheels that didn’t seem to be getting too much attention given they needed some TLC. Some days later, Austin then sent me the link for the same ad (“look at these!”) which didn’t help things. I decided that if the ad was still up in a day or two I’d get in touch and see if the seller would entertain an offer.

Obviously we know how that went – he accepted the offer – so I had to get myself up there to grab them (while I’d been talking with the seller I’d also been checking with friends to see if anyone would be making the run but no one was set to). The problem was that the Suburban was of course under the knife at Speedy Collision (update on that soon!) and while the Continental probably could have fit the wheels and tires, I didn’t exactly want to drive almost 4 hours one way to find out that it wouldn’t. With its back seats being fixed in place, space issues do pop up a fair bit when it comes to cargo hauling with that car.

Fortunately however I was able to borrow Dijon for the day. It already had its winters on so I’d be covered in case the weather turned, and as a bonus the Continental likely would’ve cost me multiple times what the hatch did for fuel given it runs on premium and gets a fraction of the MPG. It also naturally has no built-in navigation. Or working cruise control. 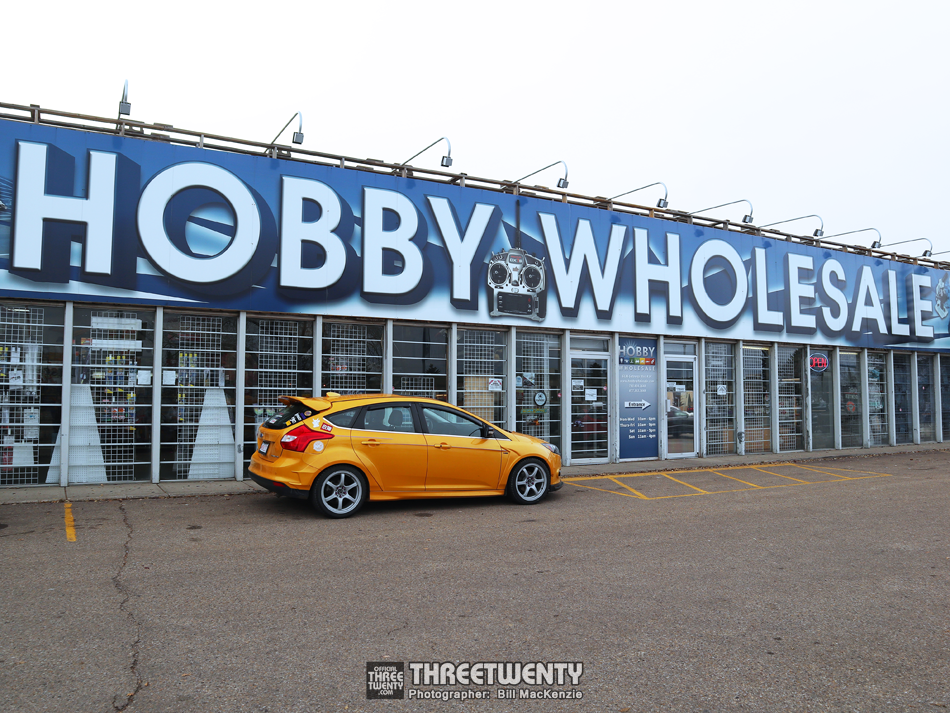 So, the other yellow Focus was prepped and off to Edmonton we went; like with my last parts run my mother wanted to come with for a bit of shopping and to see the city again, so she rode shotgun for the day. After meeting the seller (more on that – and the wheels – below) who lived just beyond the city we came back into town so I could go see the S15’s new wheels in person for the first time (I promise they’re getting closer, this will all make sense once I reveal them), and then it was off to do a tiny bit of shopping at Hobby Wholesale. We came back out to find an RS LE parked not far from Dijon, making an updated Ketchup and Mustard combo. YOHB? 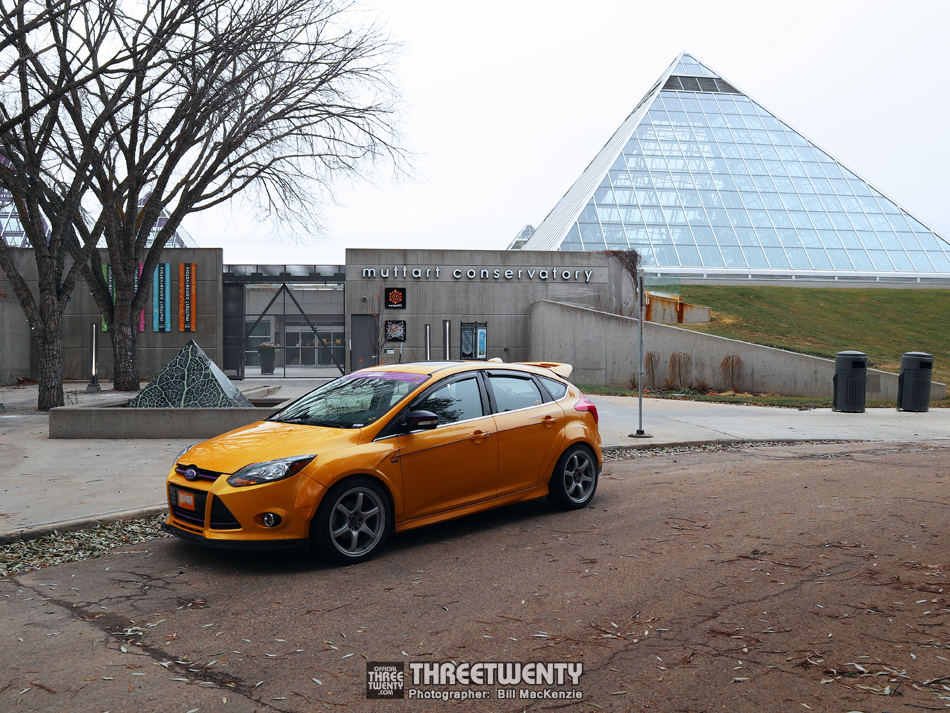 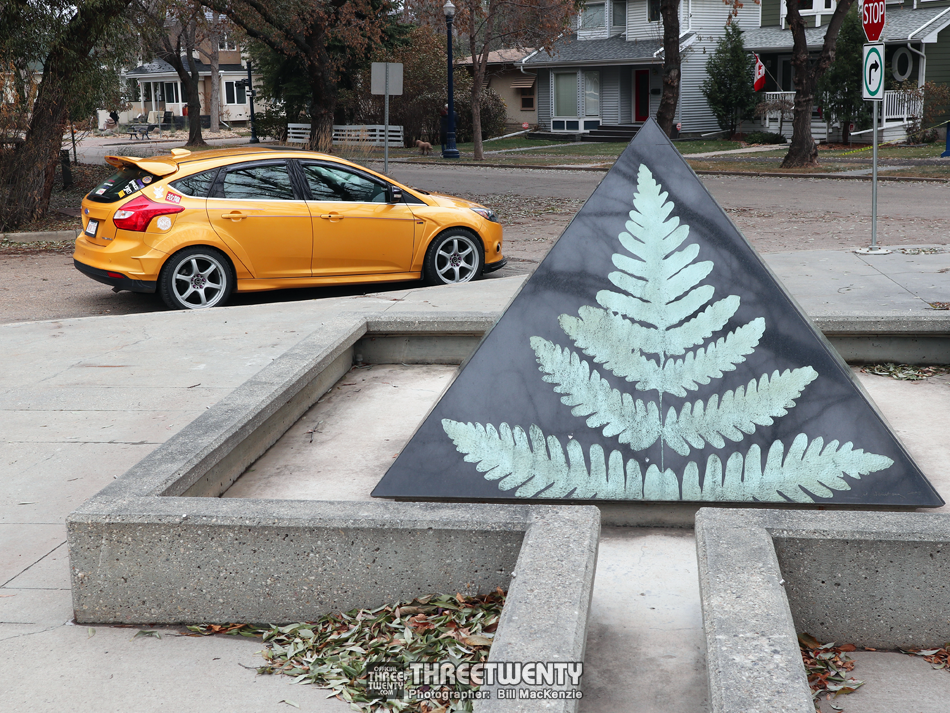 Another favourite stop is Muttart Conservatory, and even though it wouldn’t be open it was still nice to head on over for a few quick photos out front. At this point I’m assuming that I’ll be doing the run up again for the Silvia’s wheels, but in case it’s in the Suburban I wanted to get a few shots of Dijon with the Edmonton scenery. A photo from inside the conservatory, totally not from my 2016 780tuners’ Opener trip. I hate to say it but I think Dijon actually looks even better on its winter 57DRs. The new colour she chose for them works really well with the car’s paint and purple accents. Coincidentally it’s basically just Chalk, but metallic. Anyway, with the wheels picked up, shopping done, sights seen, and light now fading, I was wanting to get started on the drive back so to the highway we went. After one final stop in Leduc for these photos it was a straight shot south to Red Deer for dinner.

You knew of course there’d be a Donut Mill photo here! After grabbing some sandwiches and drinks we also picked up a dozen donuts to split, since that’s tradition. It may seem like we spent considerably more time in Edmonton than we had on the last trip, but it’s just because the days are so much shorter now that it was this dark already. Add to the list of bonuses that Dijon’s headlights are much better than the Continental’s, making this part of the drive much safer and easier. But what’s that? Get to the wheels already, you say? Alright, enough putting it off: these were the reason for the trip, and a pretty good reason I think you’ll agree! With the Mk3’s weird bolt pattern, it’s not often that companies like Rays make something that fits our cars. Obviously there was the run of 57DRs made, but 57xtremes also came in the 108 format! This very set I’m assuming was once owned by Brayden since his white FoST used to sit on some, but it looks like they’d been through a few owners (and a refinish or two) before ultimately finding themselves being loaded into the back of Dijon. Measuring in at 18×8.5 +33, they’re a good size too. Funnily enough, the seller of these happened to be someone we knew as well even though we didn’t realize it until pulling up at his house! Around 4 years ago I had sold the headliner and associated black trim from Ketchup to the owner of a black hatch – Brennan – and that’s exactly who was selling these! It was nice to chat with him for a few and see his car sporting Ketchup’s old parts; having an Arctic White interior, the black headliner made much more sense than the standard tan piece.

But what’s going to happen with these now that I have them, you ask? First and foremost, they need to be restored. One has a super small bend in the lip and all are in desperate need a refinish, so over winter I need to pick a colour and send them out to the appropriate folks to get them brought back to like-new condition. Beyond that, admittedly I’m not completely sure. They’ll probably wind up on a few of our cars here and there for fun as another set of wheels to play with, but I have no permanent home figured out for them yet. Something else to work on over winter, I suppose.