It’s Canada Day today; the perfect time to hang out with some friends and family, relax at home, or in my case get some more photos online! Today we carry on with Driven and pick up right where we left off in Part 1. I hope you enjoy, eh! 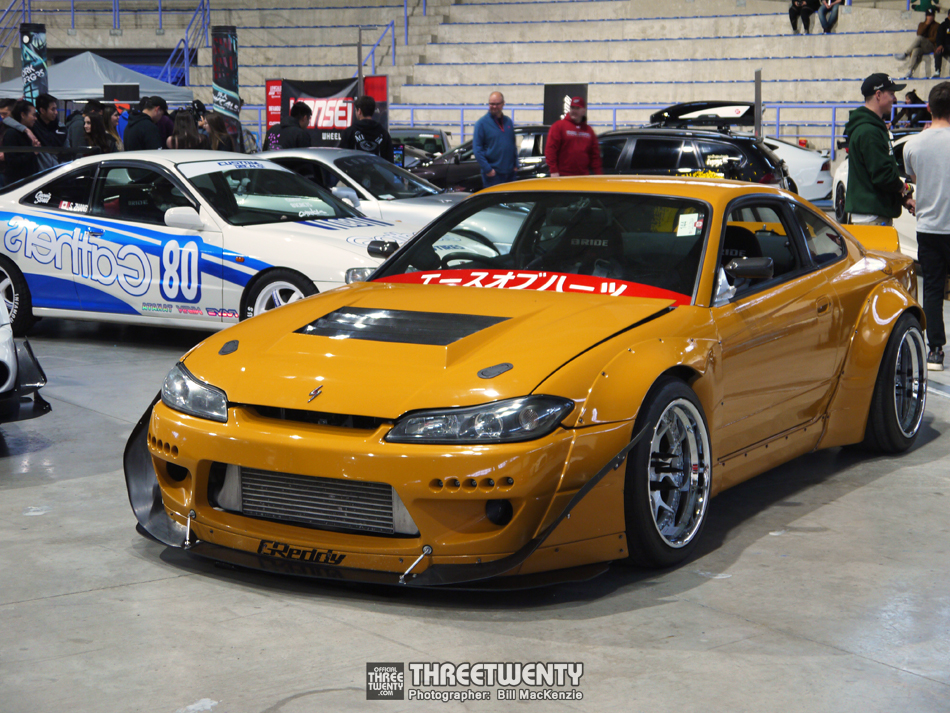 We start today’s set off with David’s D-Sport featured S15, because you know I can’t resist these; I’ll always photograph an S15 given the chance. While the GT wing worked well on the car, I’ll say I personally prefer it when it runs the little duckbill instead.

Monster engine, bronze on grey combo, all of the Infamous aero; Charles’ R33 has really come together well. I’m glad to see it up and running well after the issues he’d faced with the engine in the past.

This S13 was super tidy and the satin white/gloss gold scheme worked perfectly. Note that even the front bash bar (peeking out through the turn signal pocket) had been coated to match, as had the hood hinges. Great attention to detail, and bonus points for being a coupe. 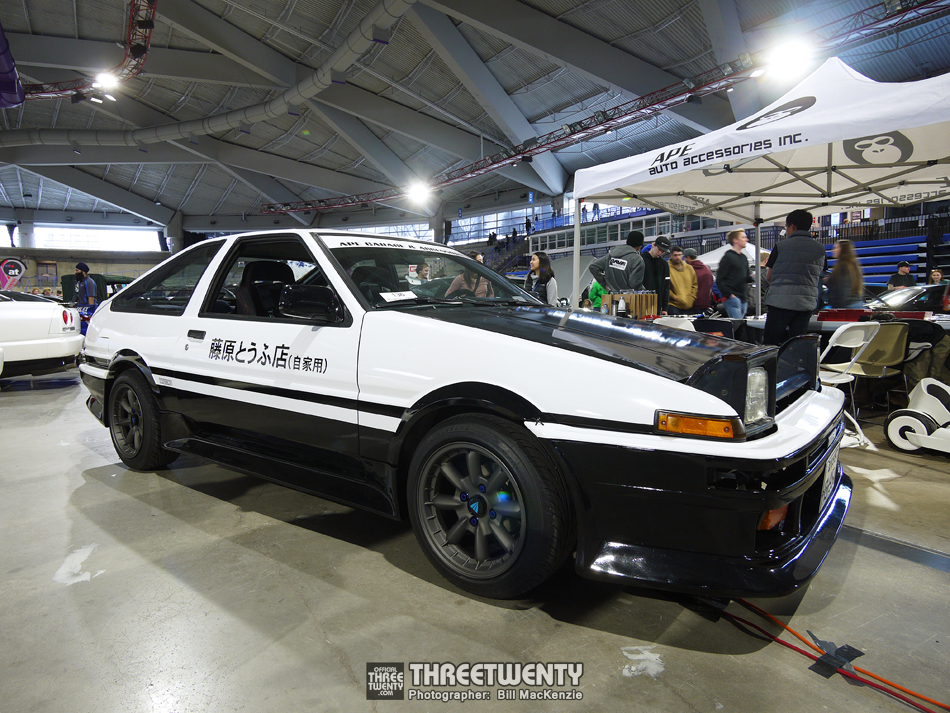 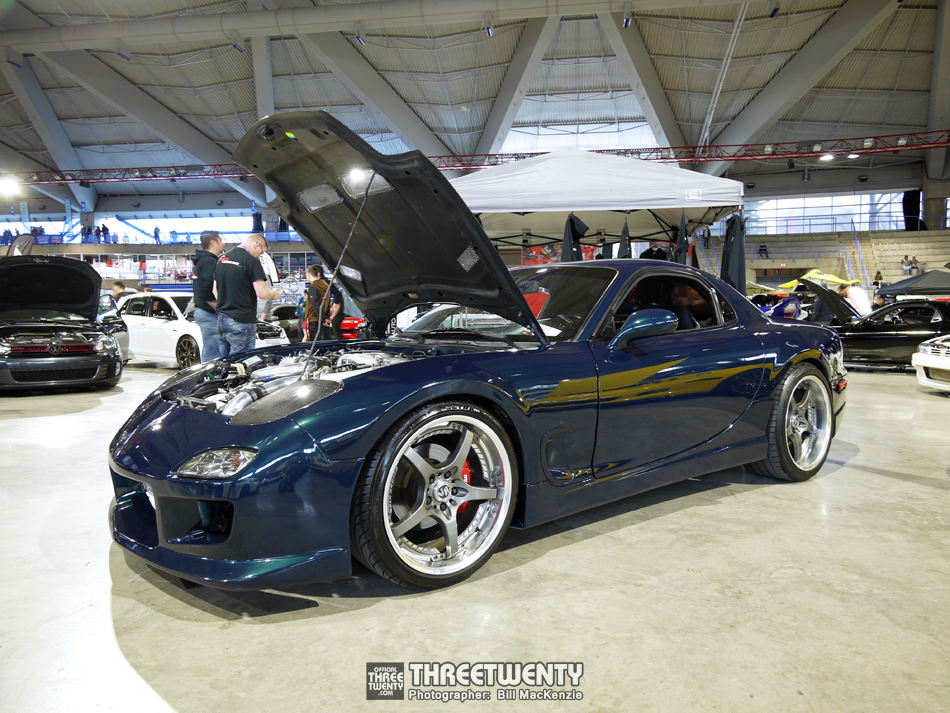 RX7, complete with Doritos for the purists…and if you remember from the Driven Setup Day post, there was indeed Tofu to go with the AE86 as well.

I wasn’t drawn to this Boss 302 because it was a Boss, but rather for the paint – it’s fairly rare to spot a Yellow Blaze Mustang so I’m always pleasantly surprised when I see one (or, any Ford really) finished in the shade. NQ club! 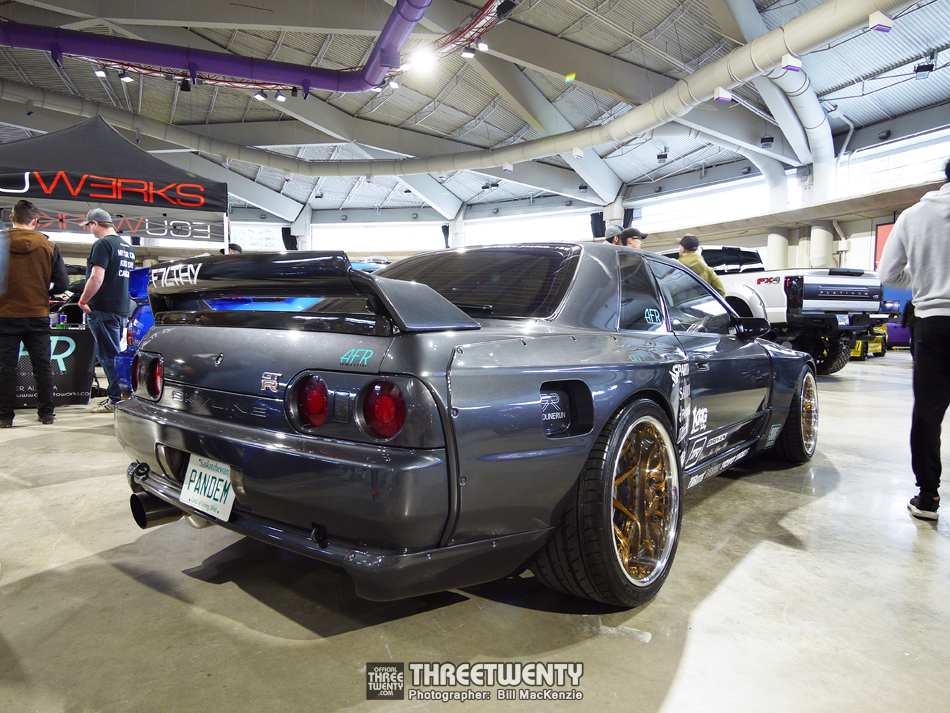 I was happy to have the chance to check out a Pandem-kitted R32 GT-R in person; and as if its increased width wasn’t already obvious enough, look at how far in the OEM fuel door sat! Obviously this kit wasn’t around back then, but it’s too bad that it didn’t exist several years ago when R32 GT-Rs were still affordable. Haha. I imagine cutting into one these days is a much harder step to take. That said, the Pandem R32 kit is certainly one of the better offerings with how the kit’s and car’s lines work together.

doczilla12 (JJ) had quite a display at the show with a trio of Liberty Walk cars; we barely see new NSXs as it is – though, granted, I did spot a black example on the road a couple of days ago which was surprising – and here was his with the aforementioned LB kit! 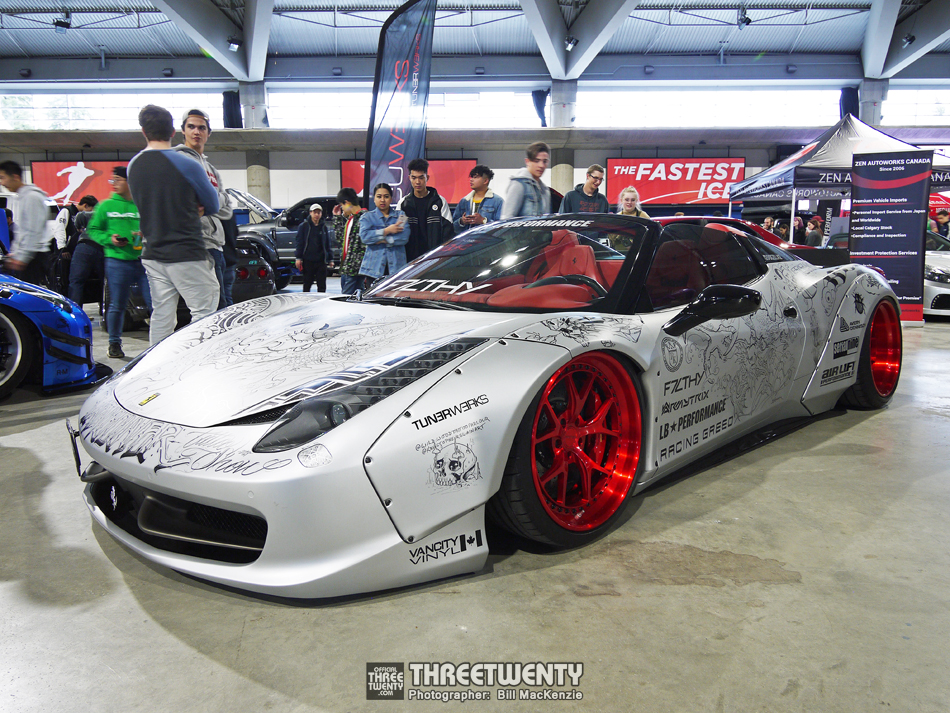 Next to that sat a satin Ferrari 458 with a stunning all-red interior and detailed drawings all over – and yes I say “drawings” as opposed to graphics because the bulk of what you see on this car was done by hand! (Sponsor decal logos being the exceptions, of course) 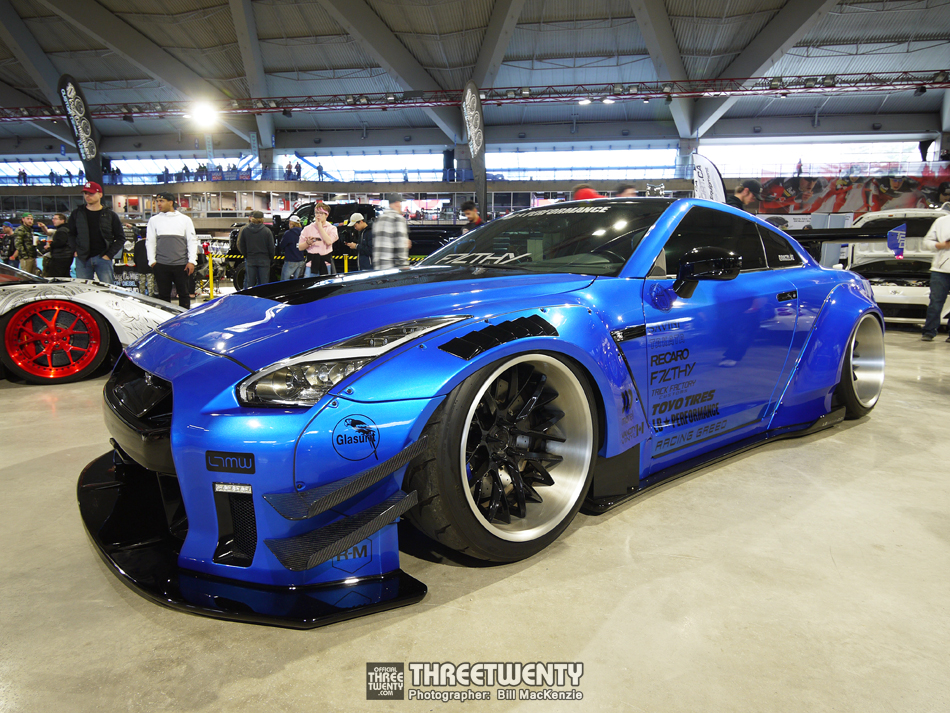 Then, last but not least, was his LB R35 GT-R. There’s nothing like seeing these things in person; the internet is of course full of pictures of cars with kits from Rocket Bunny, Liberty Walk, Pandem, and so on, but seeing one in person is still a sight to behold. Seeing four together was mad.

But of course the look isn’t for everyone, so here’s a more traditional GT-R in terms of both platform and approach. It’s hard to go wrong with a setup like this especially when the R34 in question is Bayside Blue. 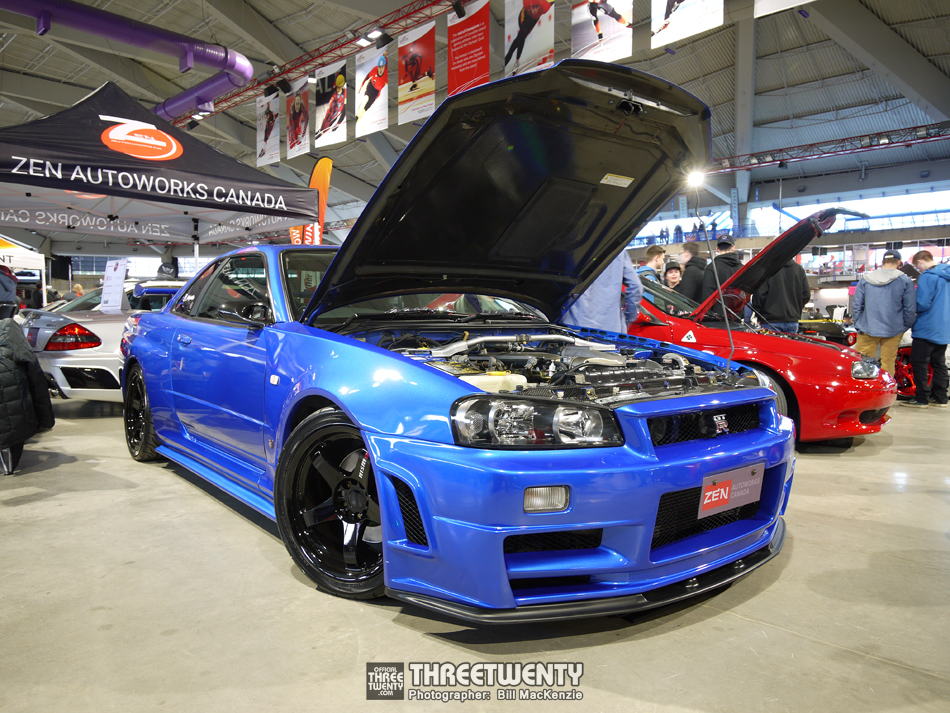 One more R34 for good measure…

James’ RS was on display, having recently come back from repairs following damage to its doors prior to the event. Also of note was the debut of the new wrap, keeping a similar feel overall but still refreshing the car’s look. 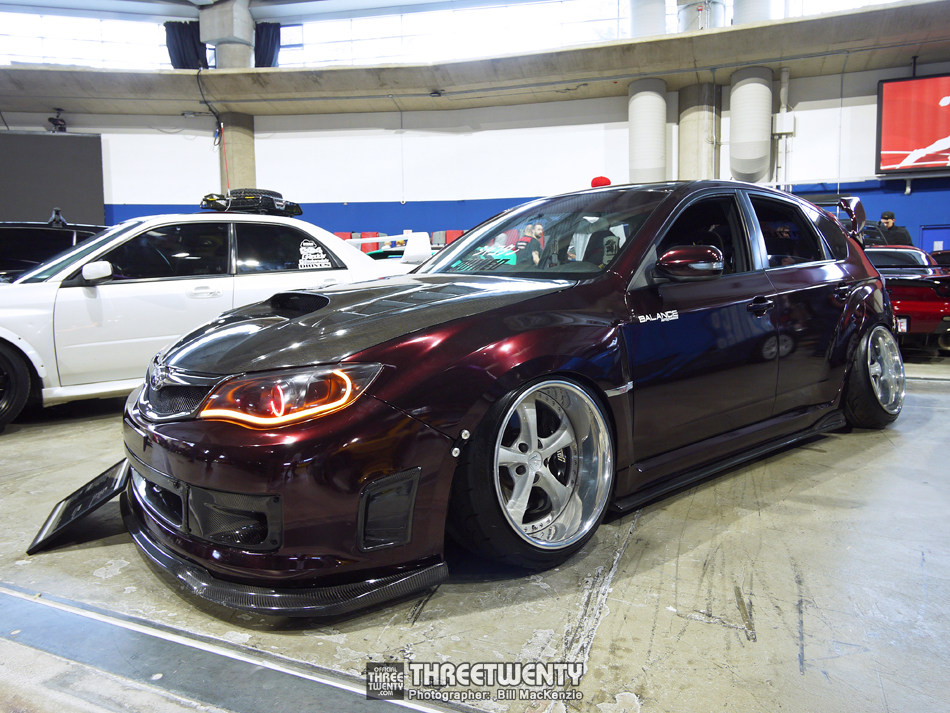 Also wearing a new wrap was Rob’s 2008 STI, showing off this new deep wine hue which replaced the old bright blue it had previously worn. And yes, it’s static.

Scott and I spent some of the setup night watching the pre-show, and as this RX-7 rolled by we noted that it didn’t sound like an RX-7. That wasn’t too surprising given how many of these undergo engine swaps, but we weren’t expecting to see an RB26 under the hood! 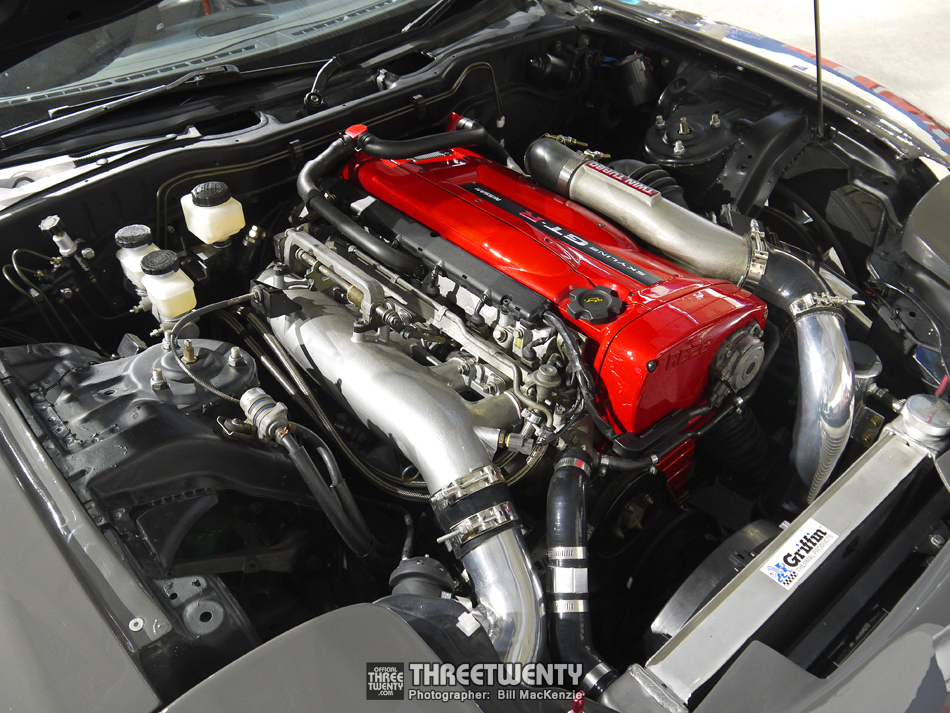 I rather liked this one because while I am a fan of 2JZs and their siblings, for me the Japanese inline-6 will always be the RB26. Also, one funny little detail worth pointing out is that the label for the right-hand button on the Sparco wheel read “Hang On”. Who wants to press it? I do. 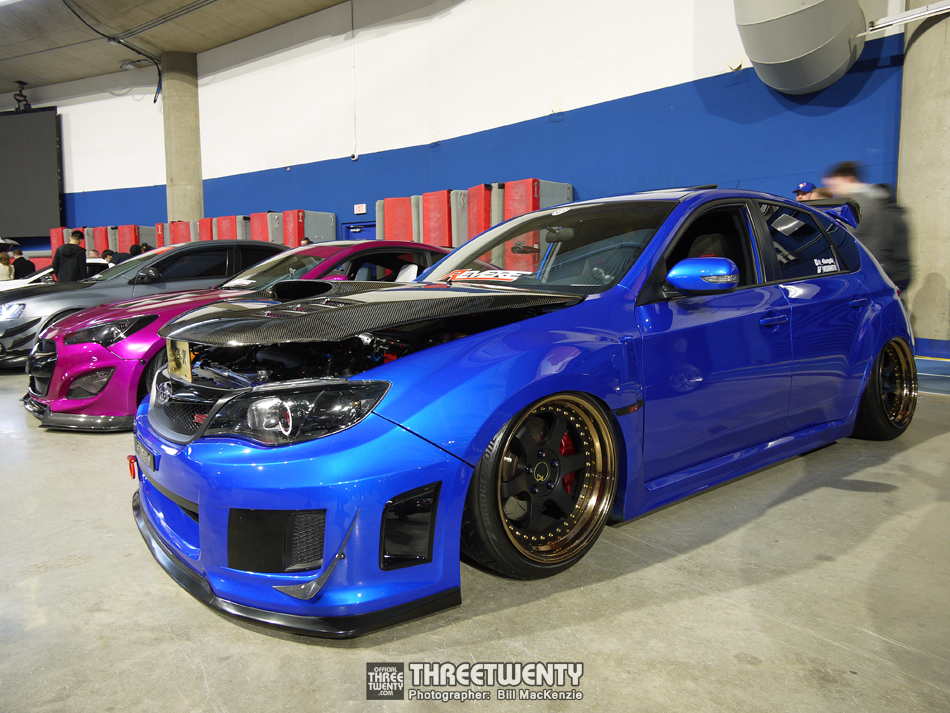 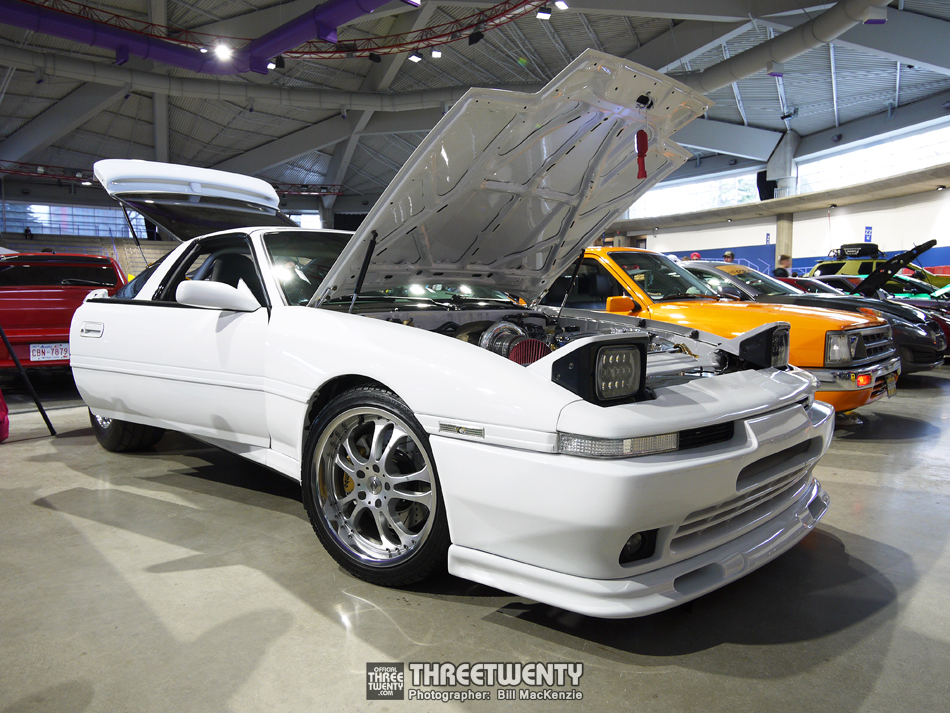 Given the number of vehicles on display I didn’t shoot the engine of every single one that had its hood up, but I made sure to with this Mk3 Supra – watch for it in Part 3. While the car was of course very clean all over, we still weren’t prepared for just how clean and tidy the engine/bay were. Given this was set up as a drag car, it was even more surprising to see how immaculate the entire thing was.

Another RB V1 FR-S, again in white but satin this time, and with absolutely perfect fitment too.

This S14 was a textbook case of less is more. OEM Kouki aero, appropriate drop, properly sized TEs, and a perfect accent colour across numerous parts (seats, wheel, brakes, lugs, etc) tying everything together. I’m normally not the biggest fan of Vertex’s wheels (for all of the embroidered writing they have) but in this case it was the perfect choice since the yellow is visible through the windshield.

If you had a tight crop and shot either end of this R334, it’d seem like you had photos of two different vehicles. I like how the front end swap was built upon with not just two different colours, but two different wheel setups as well. Two vehicles in one, in more ways than one. 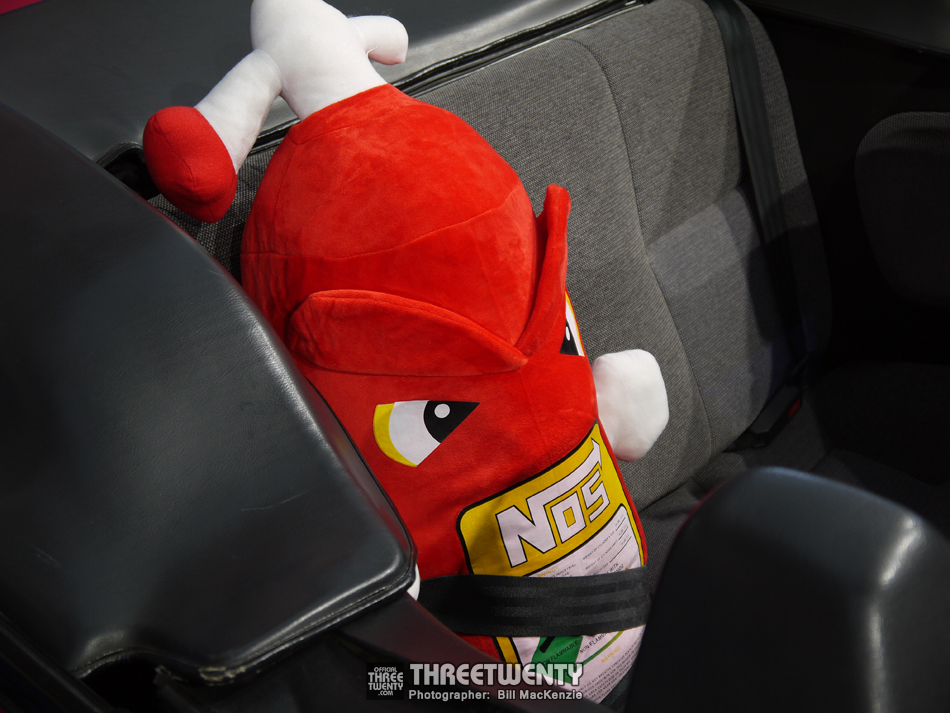 Why would a Nitrous bottle be mad? Perhaps it should be laughing given the gas? All I know is my mother couldn’t resist this thing and immediately bought it to sit in the 240’s back seat. Now, it can sit with the mini plush NOS bottle from last year’s show too!

Given the time I’ve spent at my desk this evening, I’m going to now call this the end of Part 2; please check back soon for Part 3 – which will be the last – as well as a quick set of photos from the opening of Shawn’s new shop a few weeks ago!

Before closing though I want to remind everyone that ill.motion’s Sunday School is quickly approaching now, being just under 7 weeks away. We’ll be there of course (I registered for 10 spots for our group this time around) and if all goes to plan we’ll not only have most of the condiments together, but also another car debuting an SS Tuning kit and possibly even a certain American joining us once again…fingers are crossed.