This is not the first time we’ve introduced a new car on the site this year and it won’t be the last (Ruzz just did the ST-to-RS swap as well!); so don’t be confused if you don’t recognize this little roadster. Say hello to Spark, Wingz’s 1990 Miata!

Wingz – Mario’s girlfriend – has been working on this little guy for a while and as one of the updates for this season she had opted to pick up a roll bar; a welcome addition to any roadster. As with many of our installs this meant that we met up at Mario’s shop after hours to borrow a bay. Also as with many of our installs – at the shop anyway – I dealt with photos while Mario and Ryan took charge for the work itself. Hey, it’s a small car. Too many chefs in the kitchen, and all that…

Mario and Ryan getting the car positioned properly in the bay… 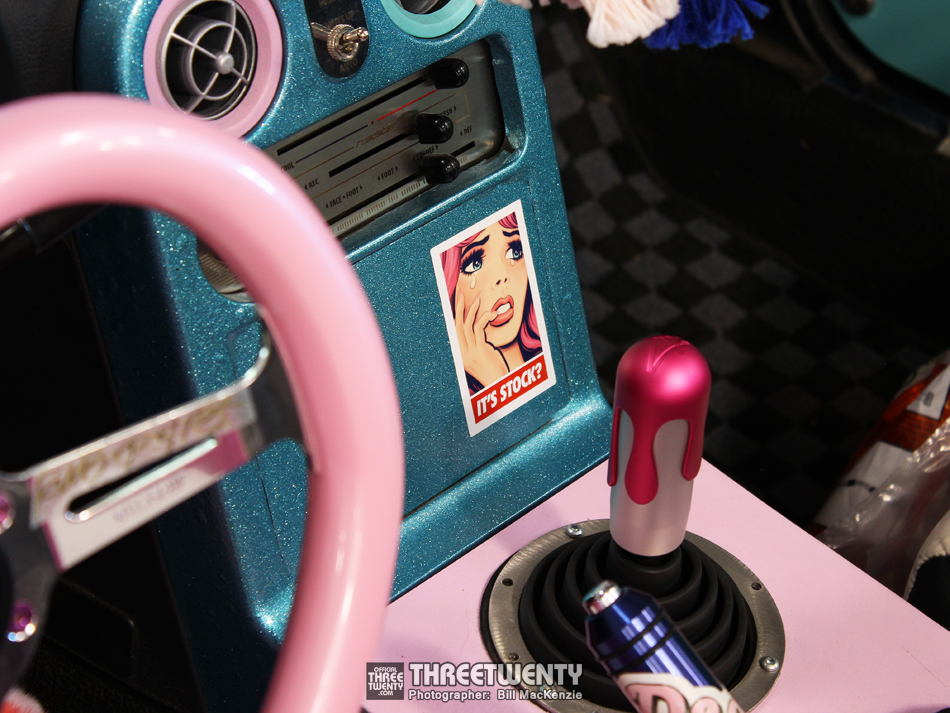 The car had at some point in its past been resprayed and changed to this (OEM I believe?) grey/blue shade; it happens to work perfectly with all of the teal/blue and pink accents throughout the car. Note the mismatched air vents here; Wingz has in some cases gone with different colours on the two sides of the interior which is a neat touch. Even the door cards are done this way.

Anyway, before long Mario was crawling around inside the little Mazda, sending sparks flying. The top was up for access (and, you know, so it hopefully wouldn’t catch on fire) which only further limited the working space naturally but he seemed to not have too much trouble.

And this is what it was all for, the roll bar in question. Admittedly with its design it’s perhaps more of a “show bar” than an actual roll bar, but it’s not like Calgary has a place to push cars anyway. It was sprayed this light teal shade prior to its install to match with the other accents as previously shown.

With four mounting points and only relatively minor trimming needed this wasn’t a very long install so it won’t be a very long post. At this point we’re already seeing Mario doing a quick touchup (with the top down, but shielded this time) prior to the final fitting of the bar. 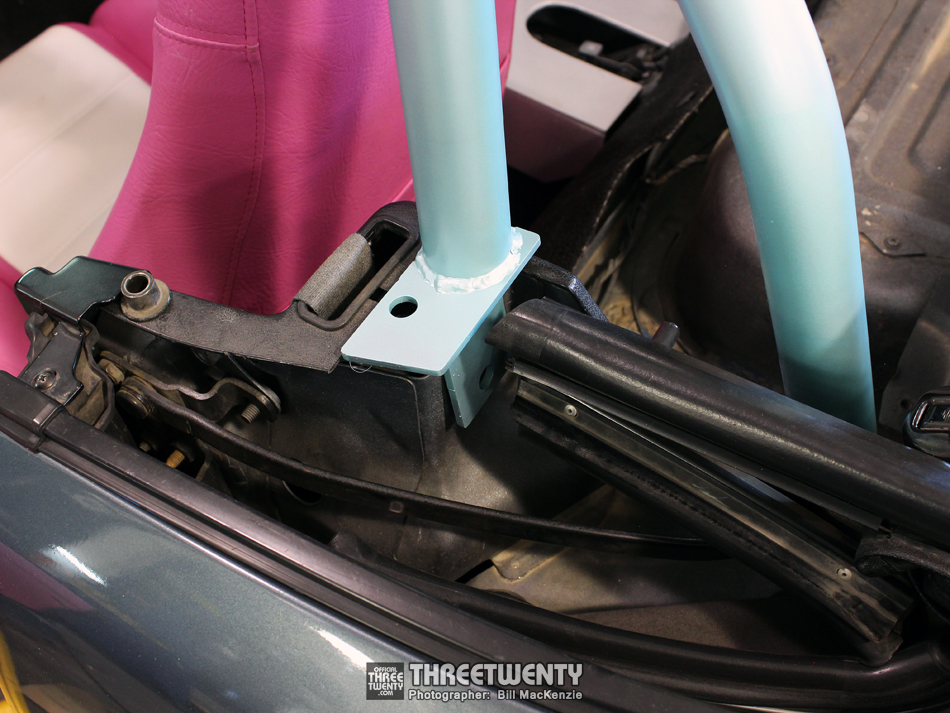 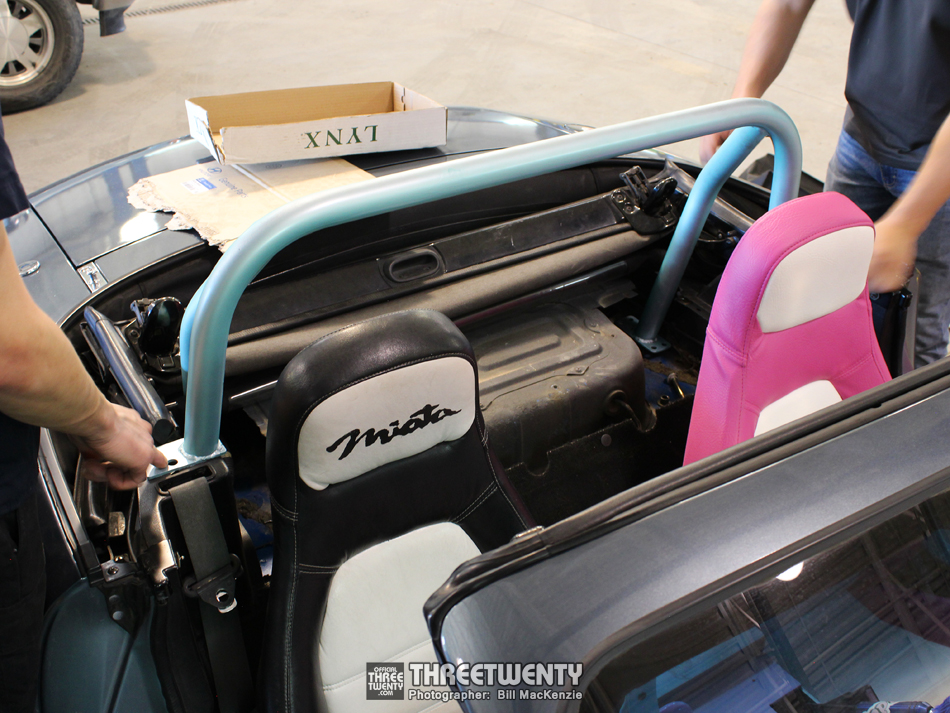 With that the bar could be dropped into place and bolted in! Two of the baseplates secured to the seatbelt points, while the other two dropped down through the rear panel via the openings Mario had made. You can also see here a couple of traces of Spark’s original colour, a much darker blue. 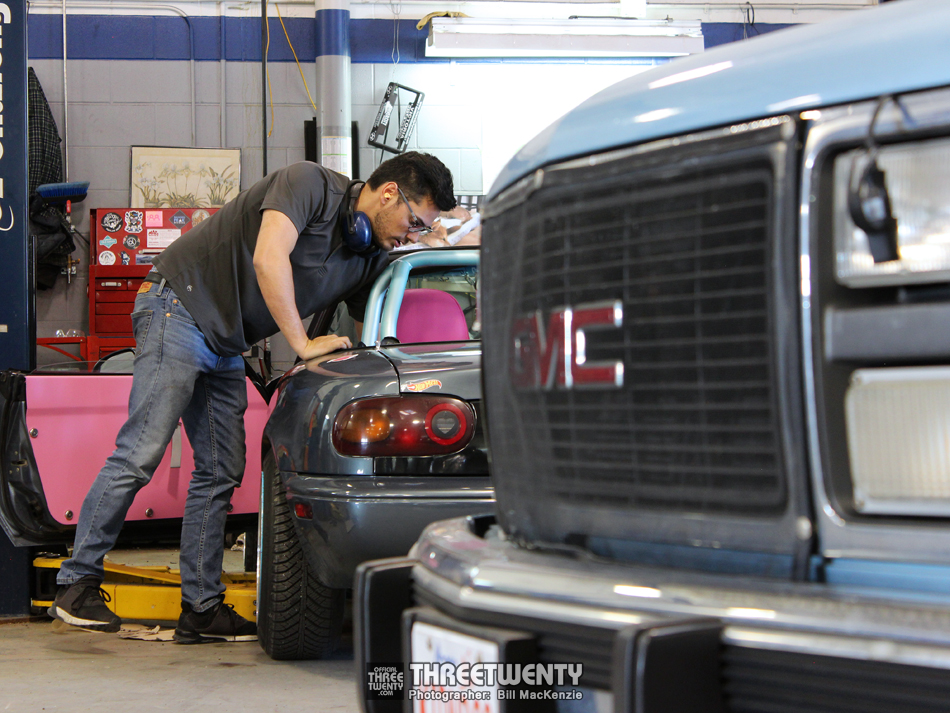 Mario double-checking everything, while the Suburban photobombed; as this was just before Driven I was borrowing this thing a lot to haul parts around. There was quite a size difference between these two!

And there it is! Spark’s new roll bar in – matching the blue accents on the vehicle – and yes, still allowing full functionality of the top. With wheels, coilovers, the interior, and many other items having already been addressed I’m not sure how many install posts little Spark will have, but you will be seeing it from time to time in photos so it was definitely due for a proper introduction here on the site.

And in case you were wondering (and remember our Auto Show game of “Will Derrick Fit”) – yes, he does.