By the end of it we already knew that the 2020 car season had gone pretty well all things considered, but these days we’re only more aware of how fortunate we were.

I’m prefacing today’s post with this because as of the time of writing, our current daily case counts are massively higher than we had even just a month ago. All of the meets and cruises that we had were able to go ahead in the first place because we managed to keep COVID well under control for most of the summer, letting restrictions be relaxed enough that we had a fair bit of freedom to enjoy our hobby. These days there’s nothing going on because the weather has turned so the toys are away, but even if it hadn’t we still wouldn’t be having anything like what you’ll see in the photos below because it wouldn’t be safe or responsible to do so.

All of this is to say that this post (and the rest of 2020’s meet coverage still to come) will naturally look pretty odd as compared to the present, but in case it wasn’t obvious to anyone following, the weather shown in all of the photos – as well as the clothing we’re all wearing – clearly indicates that these were not exactly taken yesterday. I hope everyone stays safe and that we can get things back under control in time for summer 2021 so that we can hopefully have another season similar to this one; it’s not going to be a regular year but 2020 proved that a more relaxed car season can still be more than enough fun. Anyway, for today we’re going back to the very end of September and what was formally a Still Plays With Cars (SPWC) Cars and Coffee, though it could have also been considered the 3G Meet round 1.5. With the enormous success of the first 3G meet just prior to this, we almost immediately lit up the group chat again with plans for a second gathering. I believe it was Danny that suggested another SPWC Cars and Coffee instead, so we all happily went with that; I hadn’t yet been to one of their gatherings so I could cross that off the to-do list as well!

It wasn’t a record-setting turnout but like with the 3G meet, that wasn’t the point. After all it’s quality that matters, and not quantity.  We had a great time and were able to fit in yet another get-together while weather and conditions allowed.

With it being a calm Sunday morning, we had the corner of the lot all to ourselves with a great selection of cars and – as you’ll see – a lot of the four-legged friends out as well too. Why do all Focus owners love fifteen52 so much? What an odd bunch, am I right? (We’ll ignore that both of these sets were once mine. Haha) Yolanda had her hood popped to show the latest (and final?) update for 2020, a refinished engine cover and battery box lid.

Sitting in the shadows of one of the trees was LJ’s Huracan; it’s awesome that it matches the Hellcat’s colour scheme.

Next to it sat Paul’s Accord wagon, spotless as always.

Mel was out again with her Celica; I probably took more photos of it this year than I had in all previous years combined! Easily one of the most recognizable S13s around; Anthony’s RB26-swapped coupe was parked over in the far row. Check out the insane cage inside, which is even tied directly to the pillars! Rearward visibility may not be the best though.

I haven’t yet taken a single photo of the Silvia, post-repaint, with Mustard. Shots like this will have to do until next year I suppose! I’m a huge fan of Junior’s RS4; it’s so incredibly subtle to the untrained eye, but such a detailed build in reality. I like the nod to the newer models with the QUATTRO badge in the grille.

Slammed E92, in a combo that always gets a like from me: white paint, red interior.

Tracy’s R32 always stands out with its Adidas livery and matching accents on the wheels; it’s a wicked look. I think Winston needs a new water bowl to match the colour scheme though!

Speaking of Winston (and by extension the other doggos), I really didn’t take many photos this day but quite literally a third of them were of the dogs. Keep in mind though, many were bloopers because no one wanted to cooperate for the camera.

One of many failed attempts… 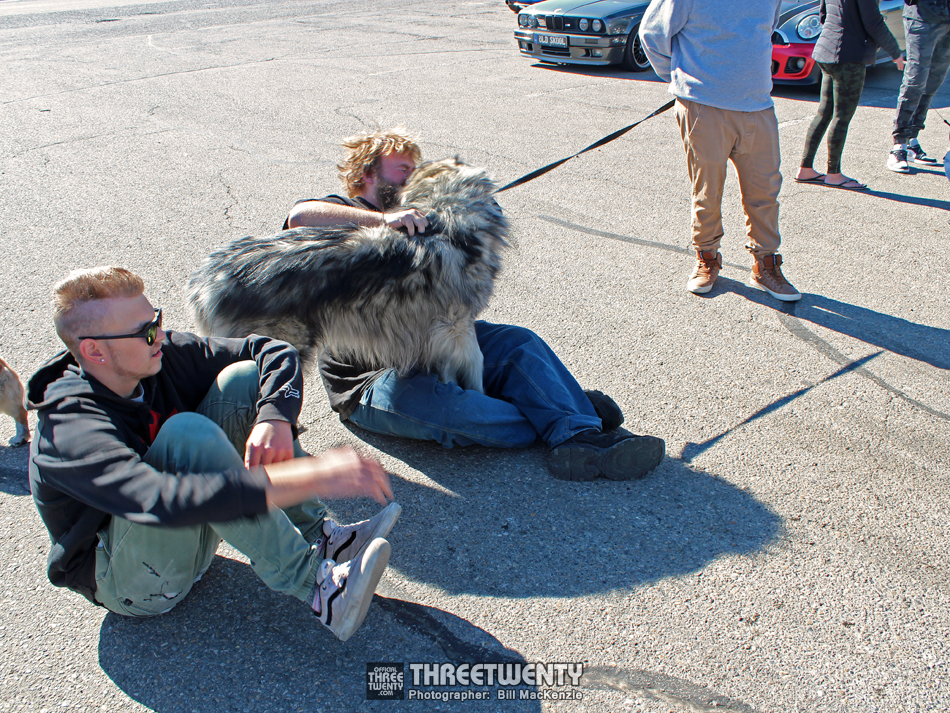 …eventually though, a few of them sat still long enough for a clear shot. Also, happy birthday to Lexi (background) who just turned 10 the other day!

One doggo not present was Noodles (Noods), but a couple of her decals could be found if you looked carefully. And last but not least, LJ heading out in the Huracan.

That’s all for today, but as always be sure to check back for more from our 2020 meets and the continued progress on the various cars! There are also a few Mk3 updates for which I have photos to edit and posts to write, so for all of our fellow Mk3 owners: don’t worry, there’s more to come there too!