At the end of Driven 2015 – Part 3, I had said that while I’d be uploading more photos from the show, Part 3 would be the end of my main coverage of the event. Let’s just pretend I didn’t type that. I was going to upload individual shots I took of our group’s cars once they were set up within the Oval and perhaps a few more, but after going through the photos again there were just too many that I couldn’t not share and there were definitely enough that this post would be just as big as the others.

In short, let’s just consider the main coverage of the show to be continuing. Or, we could still consider Part 3 to be the end and now Part 4 can fit in between it and Part 2. Hey, it worked for The Fast and The Furious… 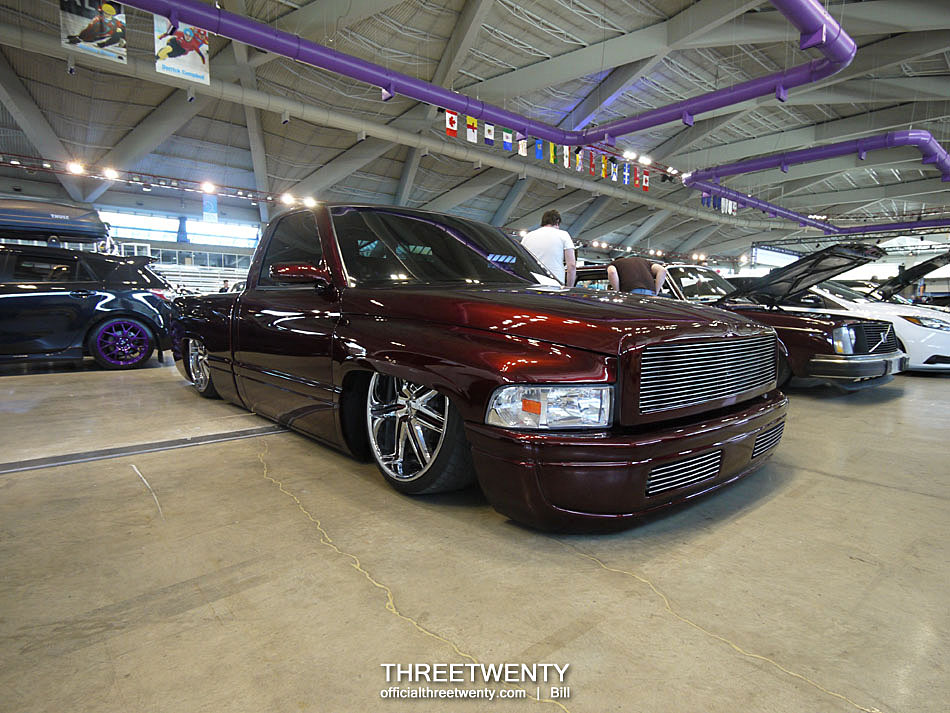 Let’s start off today with this absolutely slammed Dodge Ram. It was great to see such a variety of vehicles present and seeing a range of styles and platforms is a good way to both share and gain ideas and inspiration. While I personally prefer working on cars, modified trucks still get my attention and it could be fun to try one some day.

This slammed Volvo was next door and had its hood popped because between the fenders was a Ford V8 swap if I remember correctly. I didn’t get a clear shot of the bay of this one unfortunately.

I liked this little touch. Remembering to have fun and not take things too seriously is always good.

Next in line was Brayden’s bagged ST. With his specific air set up he gets a rather serious amount of tuck in the back as you can see, hiding some of his Gram Lights up in the wheel wells. A nice detail on his car is a set of 326 Power lug nuts.

Just doing my part to add to the massive amount of Rocket Bunny photos online…Here you can see the white bay I hinted at in the last part. I hope to see this thing out more and progressing further because it already looks amazing.

Also sporting a gold and black scheme was this S14 a couple of cars over in the row. It’s surprising how good 240s look with the rear bumper removed, isn’t it? The vanity plate is a nice touch too.

This S13’s interior was definitely a stand-out for me. A few pieces wrapped to match aftermarket seats really help bring a cabin together and the flocked dash and console were really cool too. Then of course, there’s that hard to miss shift “knob” as well! 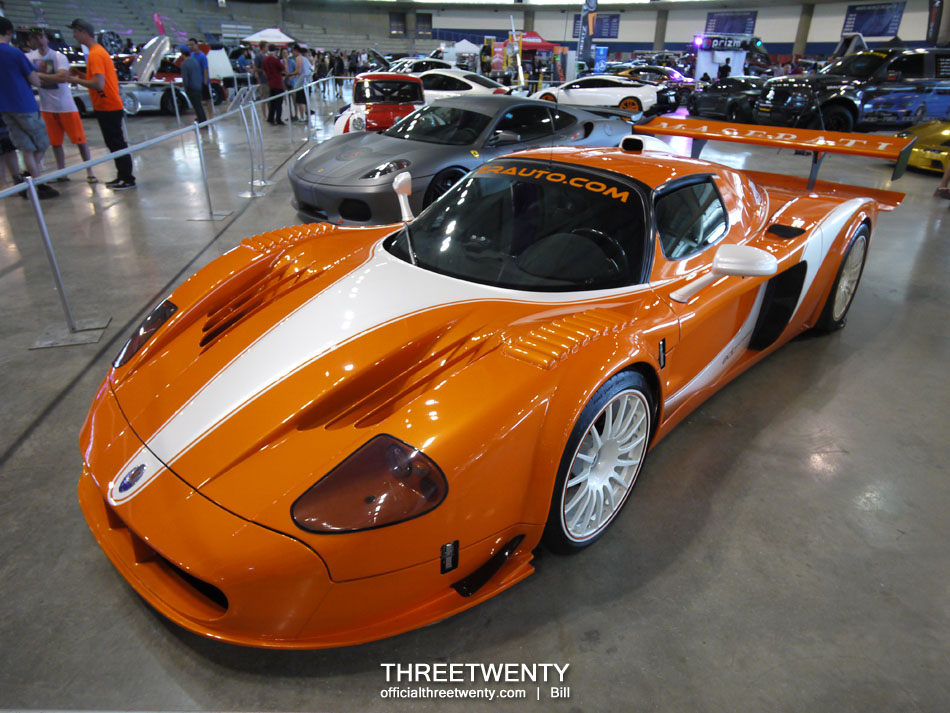 ZR Auto had their Maserati MC12 Corsa on display again. Worked on by Edo Competition, 840hp/575 lb-ft were its stats and it featured a custom widebody and Alcantara interior. ZR displays fairly informative info sheets on all of their cars which just further emphasize how insane they (the cars) are.

This GT2RS seems subtle in comparison but then again, most cars would after the MC12.

Honestly, I thought this wrap was kind of cool. It was definitely an eye-catching finish and while I wouldn’t wrap a car in it, it was neat to see how it reacted as the light reflected off of it. 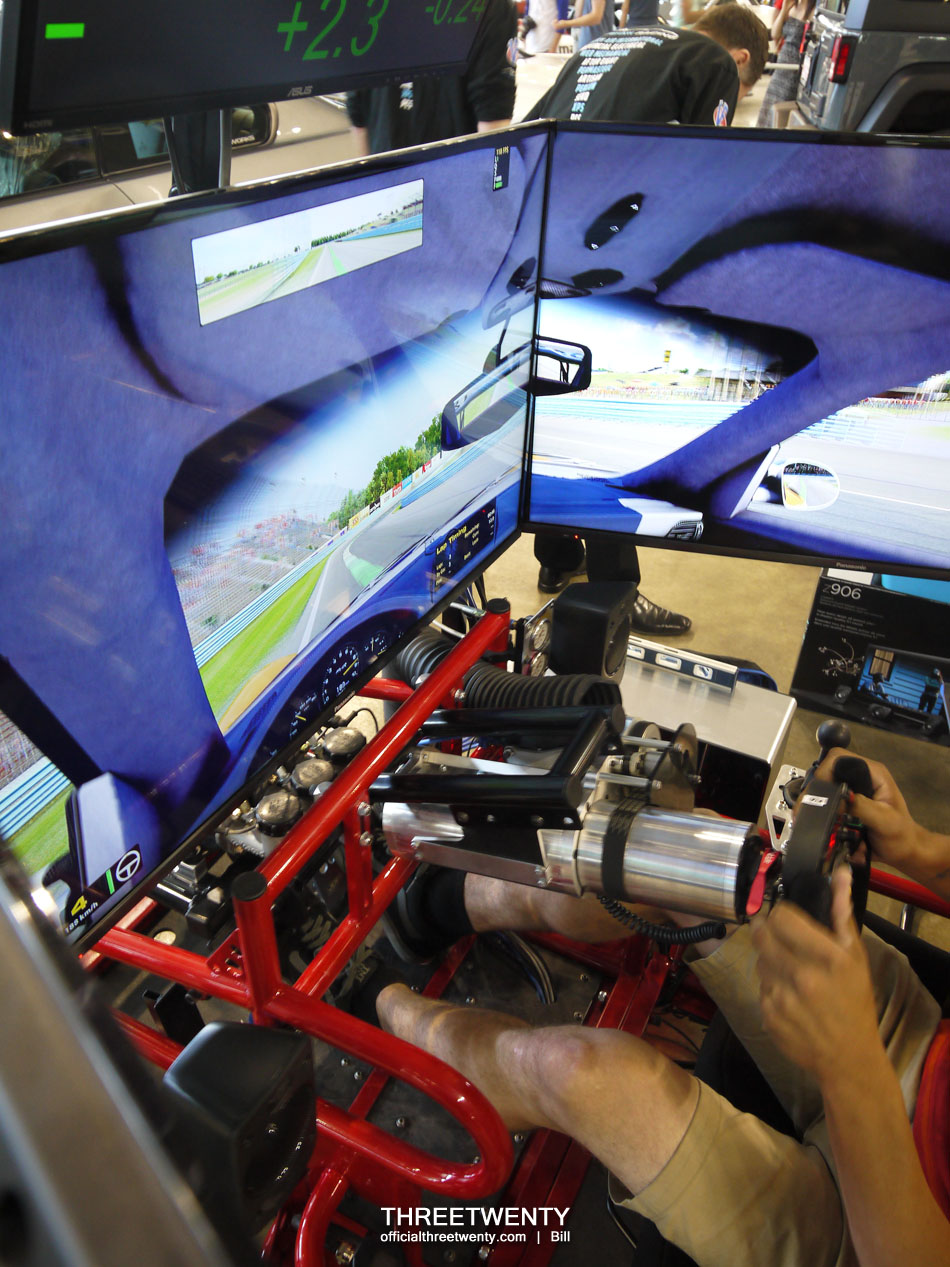 We watched a few people test their skill with the simulator that you saw in Part 2. As I had said then, I was probably more interested in watching the machine function rather than watching the actual laps though just because of everything that was going on. It was a really cool piece of equipment.

One for you scooter fans. This ‘scene’ doesn’t seem to be that big here but it must be fun to modify these.

This bright yellow Mk3 stood out from its background of cars with more subtle shades. This one represented ketchup and mustard on its own with some red accents in the bay and red calipers. 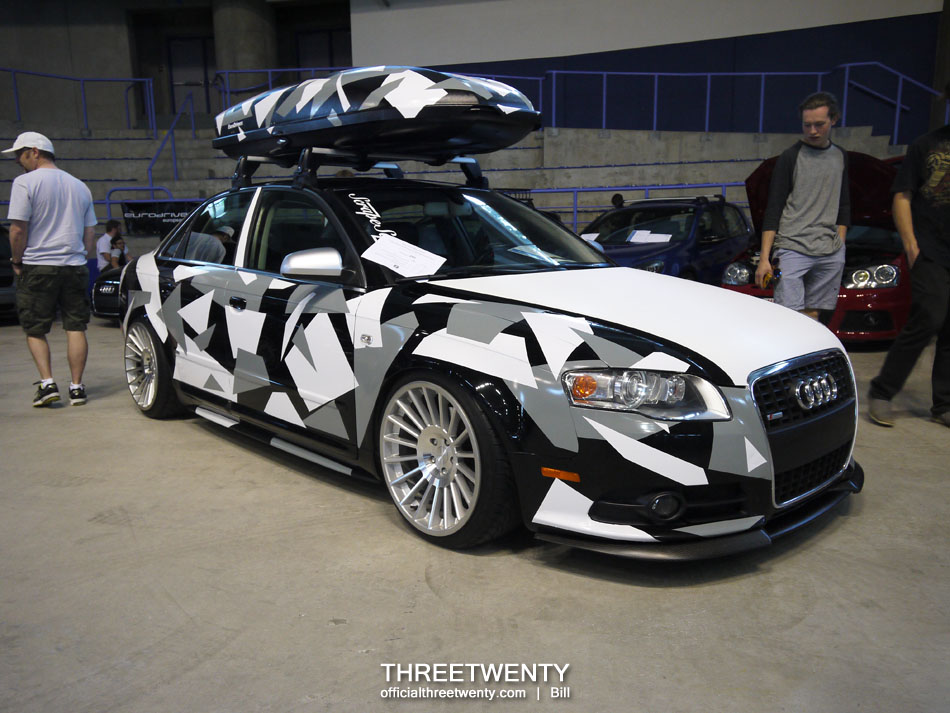 This camo-themed Audi was really well done. The white and grey were vinyl shapes applied to a black car and doing the roof box in the same scheme really adds to the overall package. I imagine that as a bonus it’d be easier than a conventional wrap as you wouldn’t be trying to cover a large panel in a single piece of vinyl without getting wrinkles or bubbles.

Back in the Bag Barn booth I believe was this air-equipped F-series. With matte white being part of the two-tone, I thought the clear tail lights worked quite well. 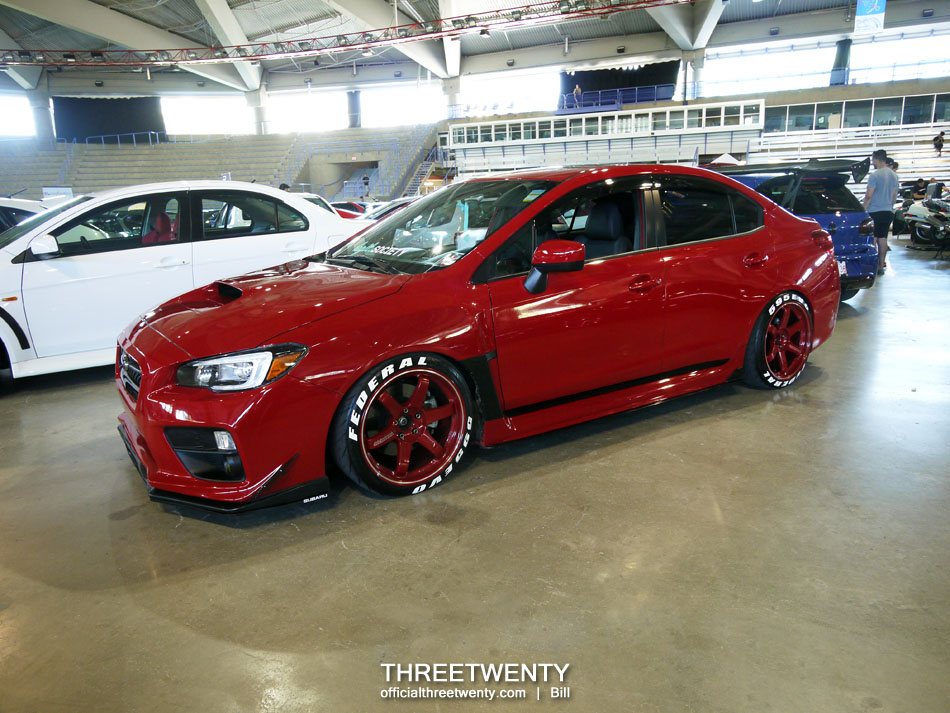 This WRX was one of the real surprises of the show for me. I was not expecting to see one like this considering the platform is still a newer one. With the red on red scheme and giant wing it looked pretty aggressive. You’ll notice things like seats and brakes are still stock but hey, it’s off to a great start. This is one I hope to see again.

Wandering back over to the Calgary Muscle Club now, a certain 1967 Thunderbird was on display. This car isn’t seen much on the site but some will know that this is actually my mother’s project! Some people assume we only care about Fords with the number that are in the family but that’s not the case. We just happen to own a number of them for one reason or another…

This blue R32 is a consistent entry at local shows and from what I can tell it doesn’t change that much for each new event, but it really doesn’t need to. It looks like a pretty complete build and I’m not sure what else could be done to it.

This Evo X was one car that really caught my attention. Without the decal advertising it was wrapped, it would have been hard to tell. The gold was a great choice and really suited the styling of the car.

Honestly, I was not a fan of the new ISs at all when I first saw photos but it only took one look at a model in person for my opinion to do a complete 180. I still think the headlights are quirky – for lack of a better word – but I like them now. 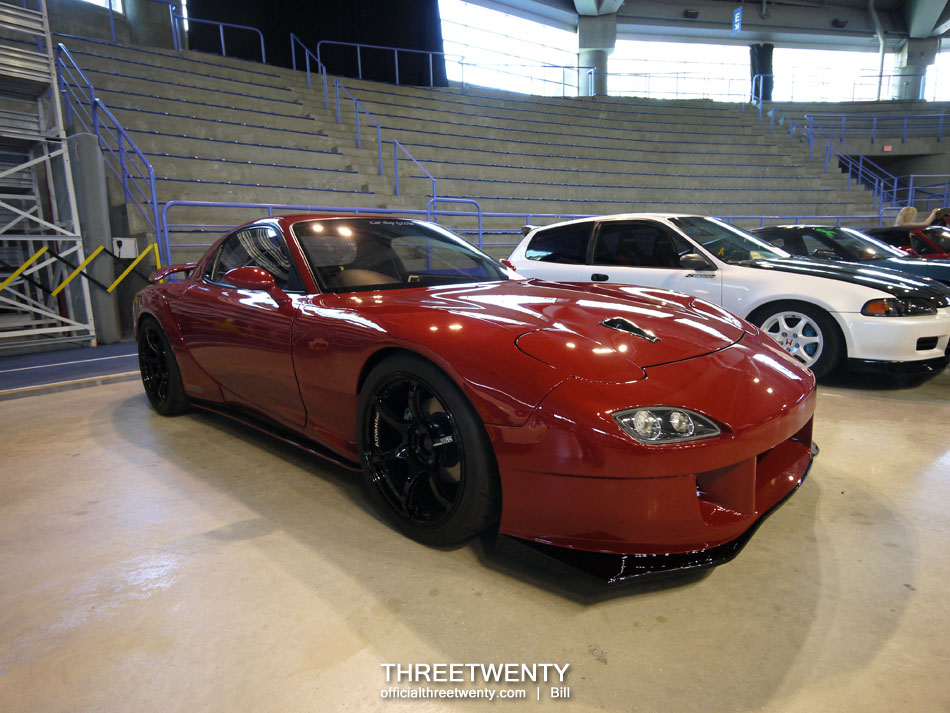 This super clean RX-7 was a favourite of mine. I don’t know off-hand which aero kit (or kits) this features but it just looks so…right. 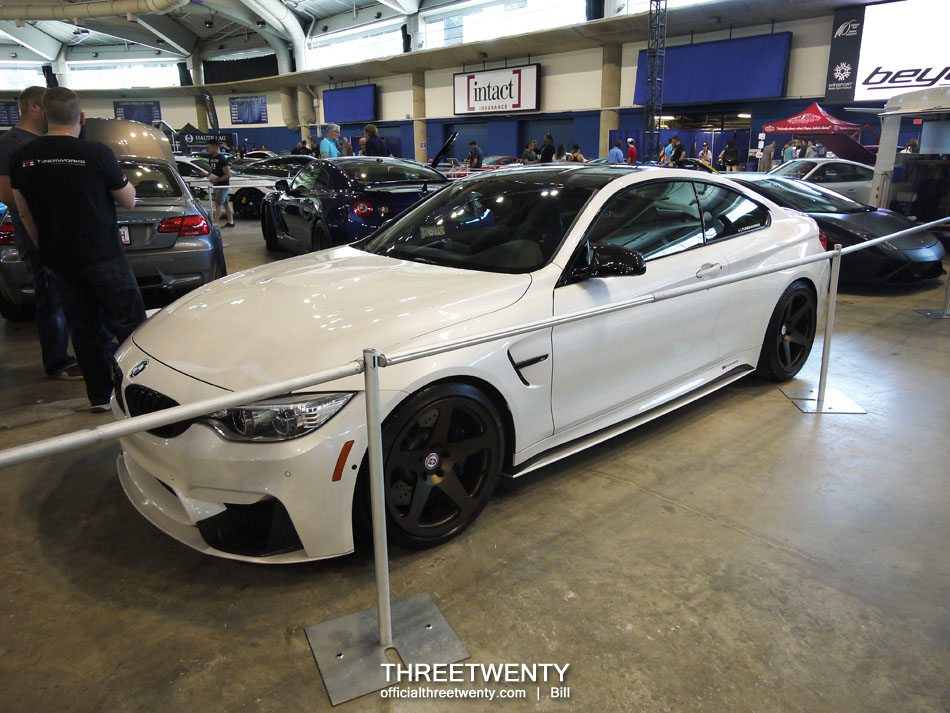 Parked within the Tunerworks booth was this M4 but it was right up against the barrier which limited photo options (“there’s nothing sadder than locking a beast in a cage.”). These things already look really aggressive from the factory and this one steps it up a notch with some subtle aero add-ons and dark HRE wheels.

There were a few cars at the show that I made a point to track down because they were builds I was following online or cars I was hearing about, but there were also some I was looking for because they had come through the shop I work at in the weeks, days, and even hours leading up to the show and I wanted to see if they all made it to Driven on time. This Mk5 R32 was one of them, with a freshly installed set of wider front fenders to help house the aggressive wheels.

Seeing as how the Driven coverage started with a look at our group during roll-in, I wanted to end it with a look at our group and a final thanks to everyone who joined. We were actually planning on having more cars, but due to some unfortunate circumstances (body damage, suspension issues, turbo going bye-bye) a few cars unfortunately could not attend. We still showed up with 8 though and once we got them arranged we felt that trying to fit more in the space we wound up with might have made things a tad cramped anyway.

Shane’s Integra is a heavily function-based build that looks really good as a by-product of that. Big brakes, meaty tires, and a JDM front end make it stand out but the new green valve cover is probably the first thing to grab your attention when the hood’s open. 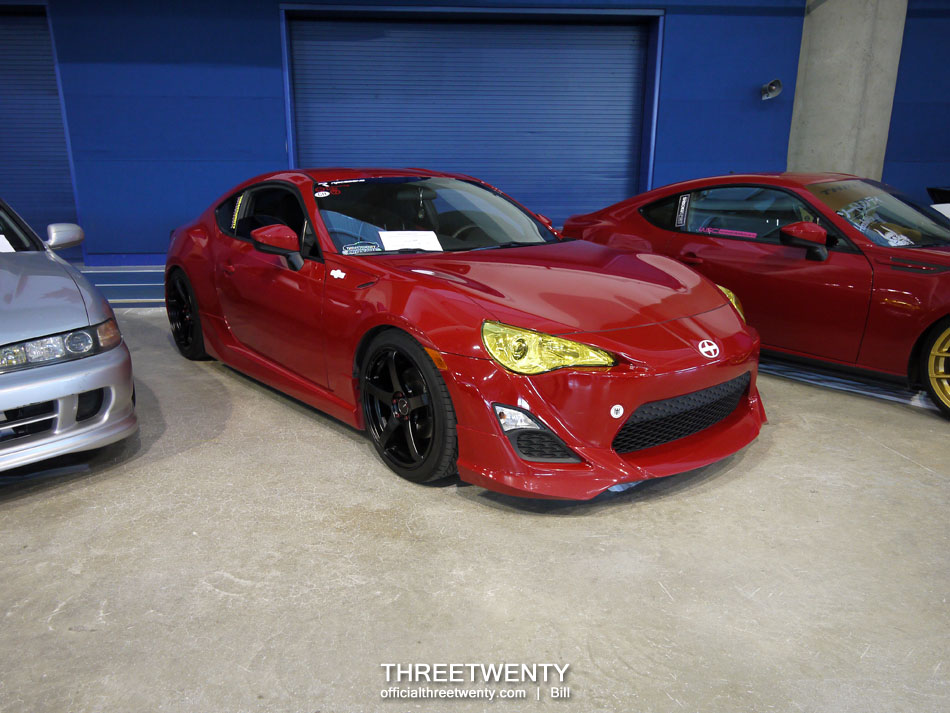 Alex’s FR-S caught the attention of one of the photographers that was having models pose with the cars, and soon enough a couple of the models were smiling for the camera with the FR-S behind them. 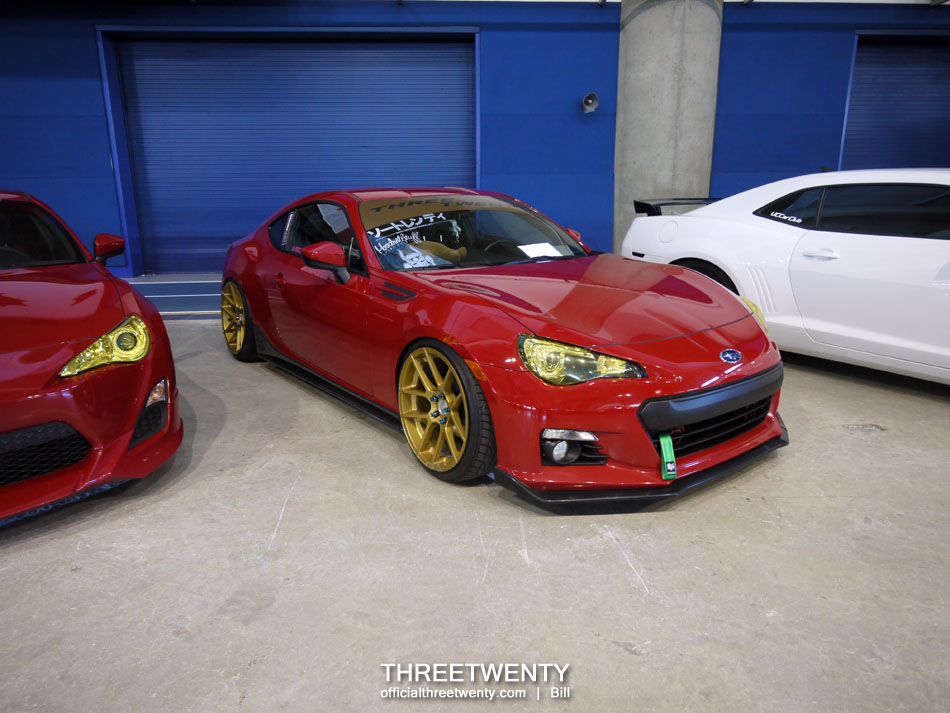 I’ll say it again – I had my doubts when I heard of 19s going on the BRZ but they really do work! Along with the new wheels Kanji also swapped to a wingless trunk lid, so there will be no extra holes to deal with when he installs a new wing. 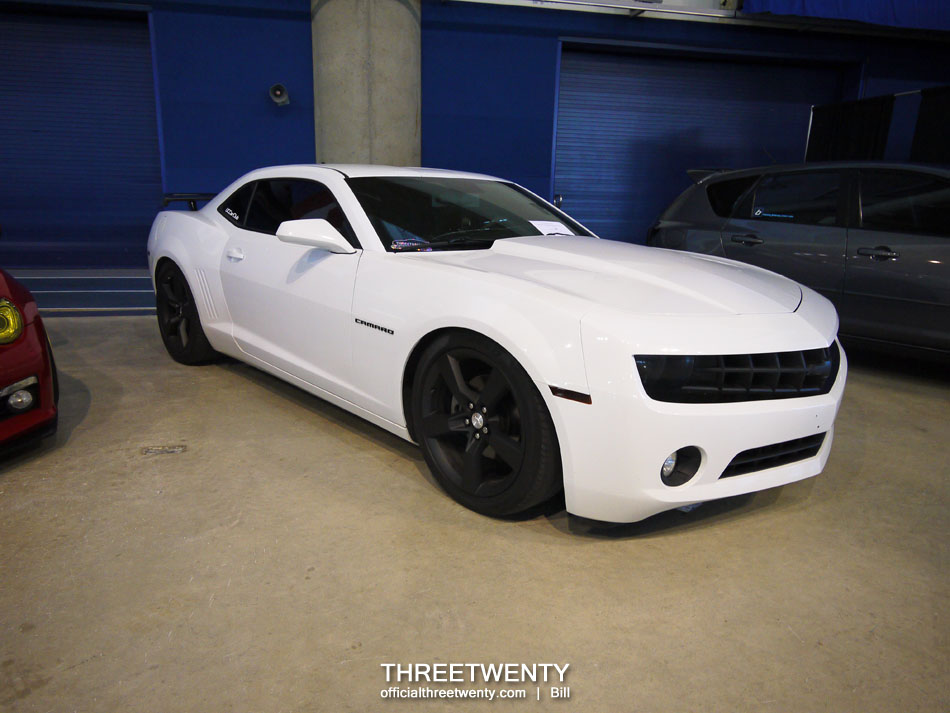 Derrick’s Camaro, which should be familiar to a lot of people reading this. I remember the days when he and I would bring what were pretty much the only domestic vehicles to many of our local meets. Times sure have changed!

Yolanda’s 3, at the end of our first row. She asked me if I had, but as it turns out unfortunately I didn’t get a shot of her car when she had her headlights’ blue halos on during the show.

My knock-off ST seemed to get a lot of attention which was great to see. I always keep it clean but it was nice to see it show-level clean and shining under the lights in the Oval.

Vlad’s ST may not have been part of the white wheel crew but as much as I like the look of white on white, I think the gold suits his even better. Very classy and tough looking at the same time.

And finally, Mario’s ST, which also received a new banner for Driven. His old purple sparkle banner was removed to make way for a two-tone replacement; gloss white with purple sparkle lettering. Mario was a bit upset because the new lip he had on order didn’t arrive for Driven but that was quickly forgotten when he won Best Focus at the end of the day!

So there we have it, my look at Driven 2015 now wrapped up. That is of course, unless I go through my photos again and decide to post even more. Maybe I’ll slot part 5 in after 4 but before 3, because that’ll make sense, right?

In all seriousness though, I hope you enjoyed reading through my coverage and if you weren’t able to attend the show I hope this gave you a good idea of the new level of cars we witnessed that day. Things are looking good for the Calgary Car Scene! Now if the rain we’ve been getting since last week would go away, we can hopefully enjoy another Grey Eagle meet tonight!