Winter sucks for a few reasons, with one being that friends and I sometimes don’t get as many chances to hang out as we do in the summer. As the cars spend more time parked, the days get shorter, and the temperatures outside go from cold to colder to “I want no part of that”, suddenly we realize that it has been far too long since we did anything other than communicate over text or through social media.

Recently Brandon popped by to pick up a couple of decals and it not only allowed us to catch up for a bit, but it also gave me the chance to grab a few photos of his car for the site. As part of our chaotic Sunday School prep last year Brandon’s car – aka Mayo, aka Le Yeti – had received a new banner as well as a rather substantial upgrade to the sound system, neither of which were ever properly shown here.

The latter happened when Brandon had a decently long trip out of town last year and rather than leave his car parked for the duration of it he decided to drop it off to receive a custom sub box. That way he could come back to the finished product and not have his car stuck in a shop while he would actually need it. 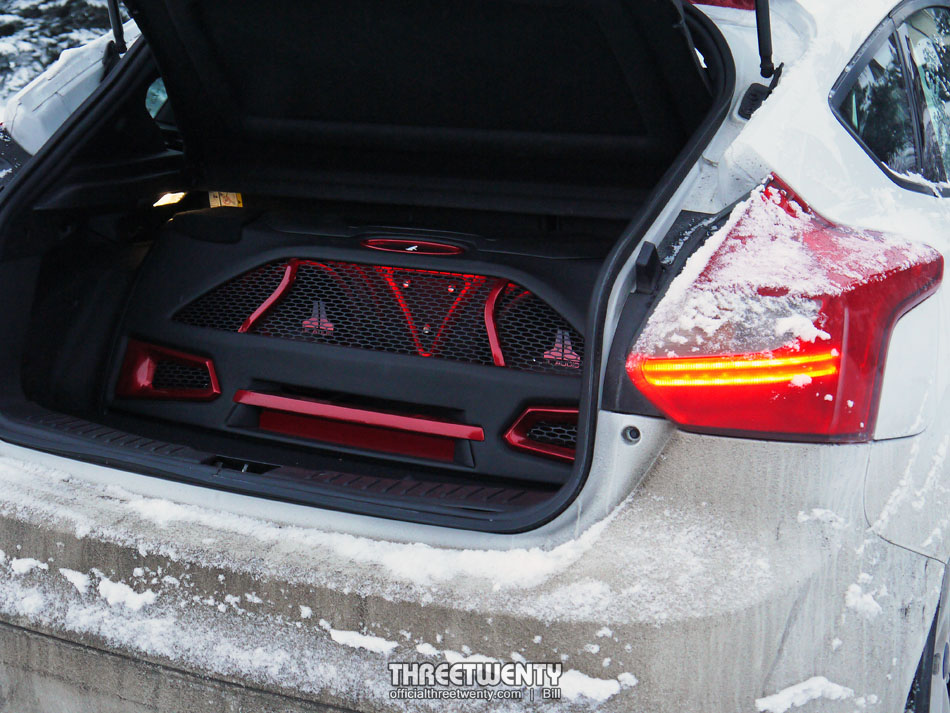 The box is also a very unique one, as when you open up the hatch of the ST you are greeted by – the nose of an ST? 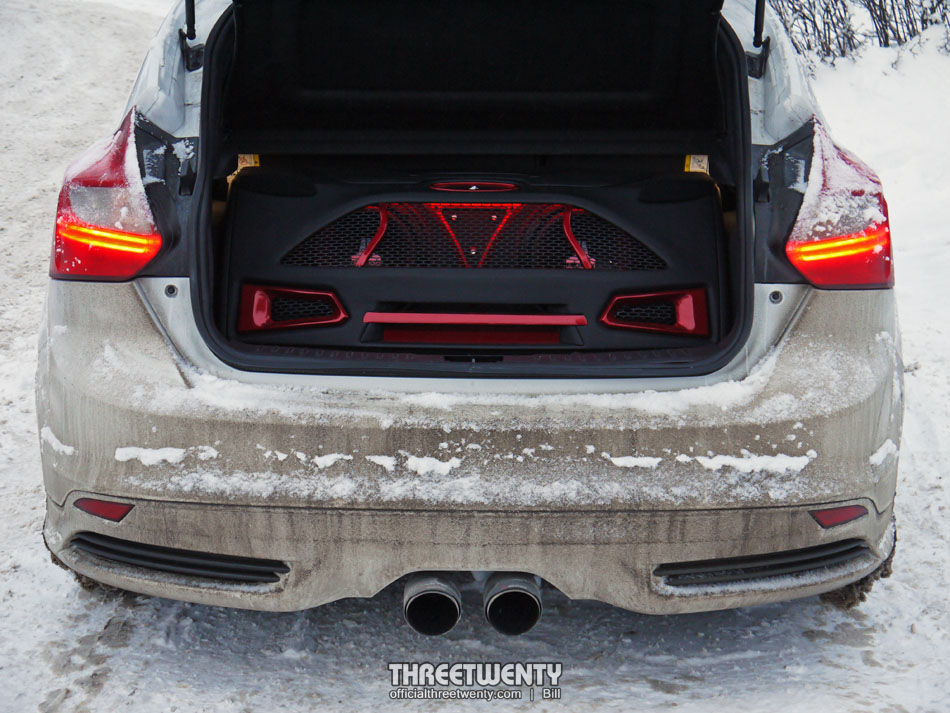 That’s right! The entire box was made to heavily resemble the ’13-14 ST nose; it follows similar contours to the nose of the car and upon looking through the main grille you see the JL subs staring back at you. To further tie it in to the rest of the car, various accents were wrapped in the same True Blood vinyl as the roof and other parts of the car had been earlier in 2016.

Side note – you can also spot the Akrapovic exhaust tips here, a subtle change to the back of the car.

Back to the box, Brandon wanted to make one small change to it for this year, hence his request for a couple of decals. Specifically he wanted an overlay for the ’emblem’ on top of the sub box. His summer wheels’ center caps and his steering wheel emblem all have overlays with little Yeti logos and he wanted one for the box as well so that it’d match. 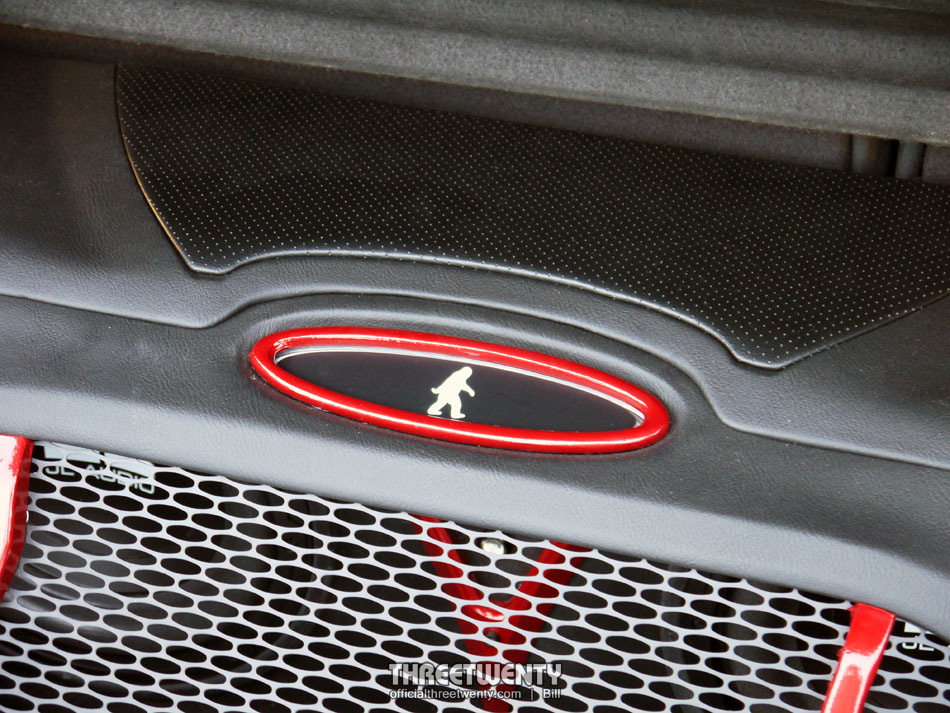 I cut a couple (one being a backup just in case) featuring gloss white Yetis on matte black backgrounds and then stuck one on the box for him. A small gap was left around the vinyl to allow the red accent lighting to still shine through. The perfect finishing touch! 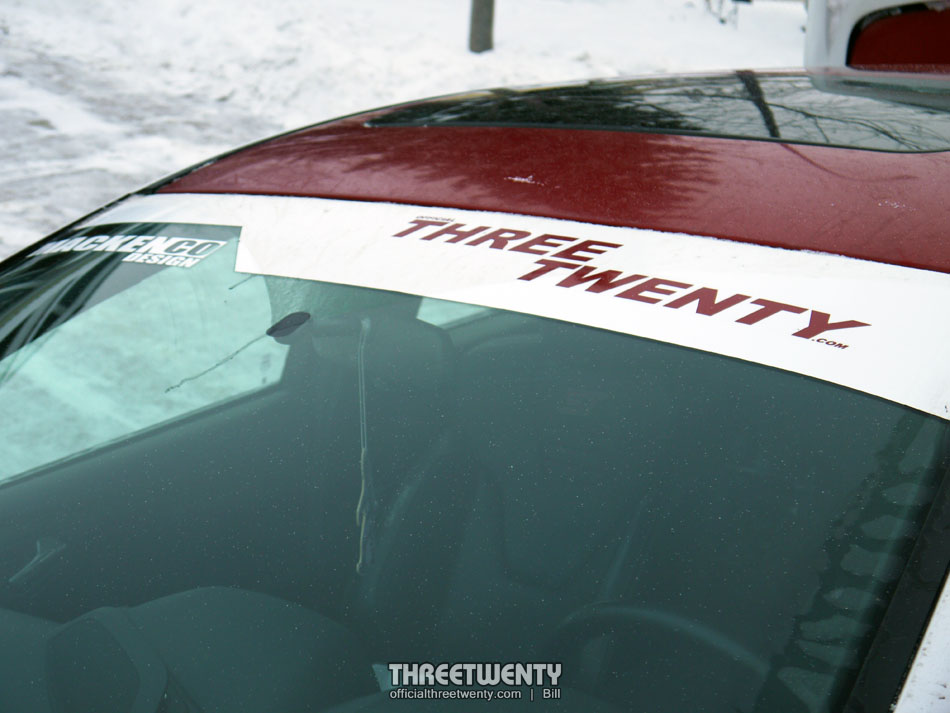 With the sub box now looked at, we should get to the aforementioned banner as well! Like I said this had been applied as part of our Sunday School prep, and while it was seen in photos it was never really shown in detail, which is unfortunate because Brandon, myself, and Mario were all very pleased with how it came out (the three of us applied it together). 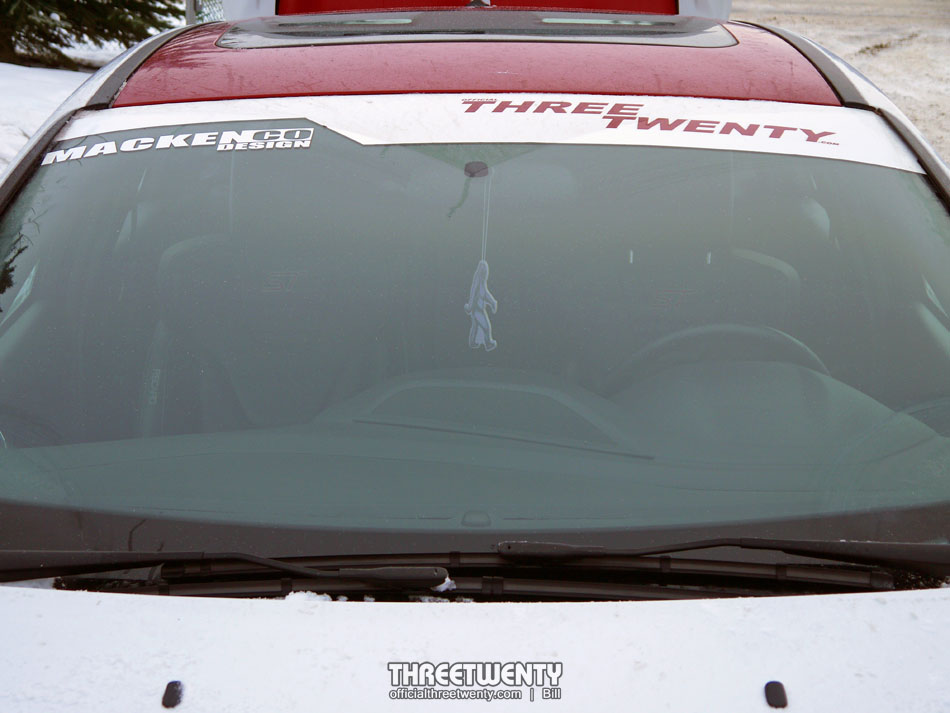 Brandon had wanted something unique and he also wanted to feature both of my logos (thanks Brandon!) so this is what we came up with; the background and MacKenCo text are both gloss white while the officialTHREETWENTY text is – you guessed it – True Blood. I’m very happy with how this turned out and how it’s so unique! A big thanks goes again to Brandon for wanting to sport both names on his car – I always appreciate it when others want to have banners for the site or for MacKenCo on their vehicles! 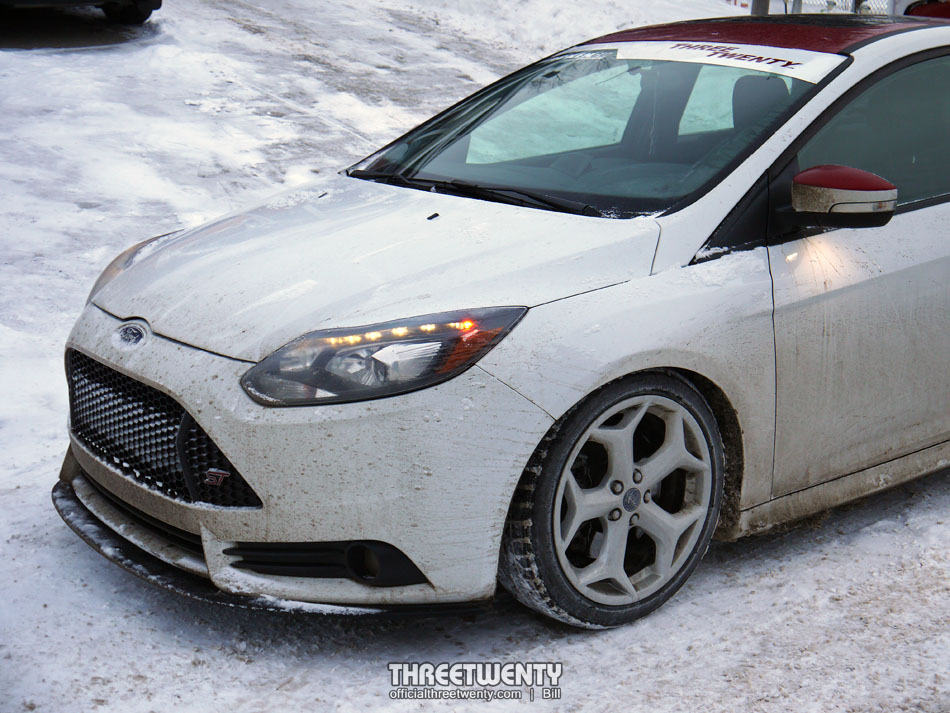 Apart from the box and banner (and exhaust tips) there’s not much else to report on in regards to Mayo, but it is winter after all! Speaking of, in previous years Brandon would switch back to the stock suspension for winter but this time around he decided to keep his coilovers in instead. Even on stock wheels, the ST was looking good!

As a final update before closing today, I have added a new page to the site for Mayo; it can now be found under the About tab in the header. As with the pages for the rest of Team Condiments it’ll contain the information about the car should you ever wish to know more about it, and I’ll keep it updated as more changes and modifications take place!