If you’ve been following fifteen52’s Project ST (PST) website, you’ll have noticed that this month Sriracha’s next update was published! Taking a look at the new wheels and coilovers that were fitted, it covers off another area of the vehicle and also means that it’s time for another post here, for the extra photos and anecdotes that didn’t make it into the main update.

In case you hadn’t seen it yet, you can CLICK HERE to be directed to PST and check out the article. Up to speed? Perfect! Today’s post isn’t the largest but I hope you enjoy it regardless – let’s get started!

(As a side note, you’ll spot the old watermark in these photos as they’d been edited previously, obviously, and I decided to keep them as-is instead of updating them. Haha) 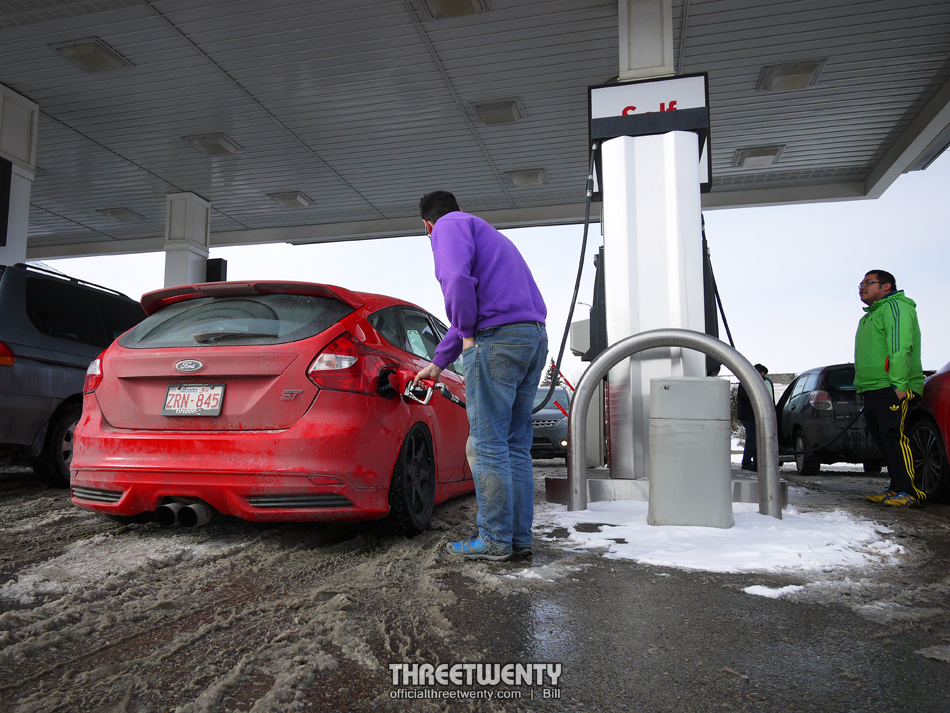 We might as well start off with Sriracha’s predecessor, Ketchup; as it was discussed in the PST article, air was a consideration for Phase 1 of Sriracha before Mario ultimately decided to keep it simple and go with coilovers for the time being. Having run springs, coilovers, and air on Ketchup while he owned it, Mario had ample experience with each form of lowering and knew well the benefits and drawbacks of each. The air was probably the best setup and was a ton of fun (though the install was brutal being in the middle of winter when it was minus too much outside) so it may still happen in the future, but for now the Sriracha packet stays static; it saved time and money and had less parts involved.

Incidentally, while we’re talking about Ketchup it’s worth a quick mention that it was the first bagged Mk3 ST in Canada, and one of just a handful in the world at the time. The car was barely a year old when we fitted the kit, which happened to be from fifteen52’s STanced project car!

But, back to Sriracha…

Again, please head over to PST to read the main article, but the cliff notes are: ST coilovers, 17×8 Turbomacs and Tarmacs, and the OE Michelin Pilot Sport A/S 3 tires (which measure in at 205/40R17). 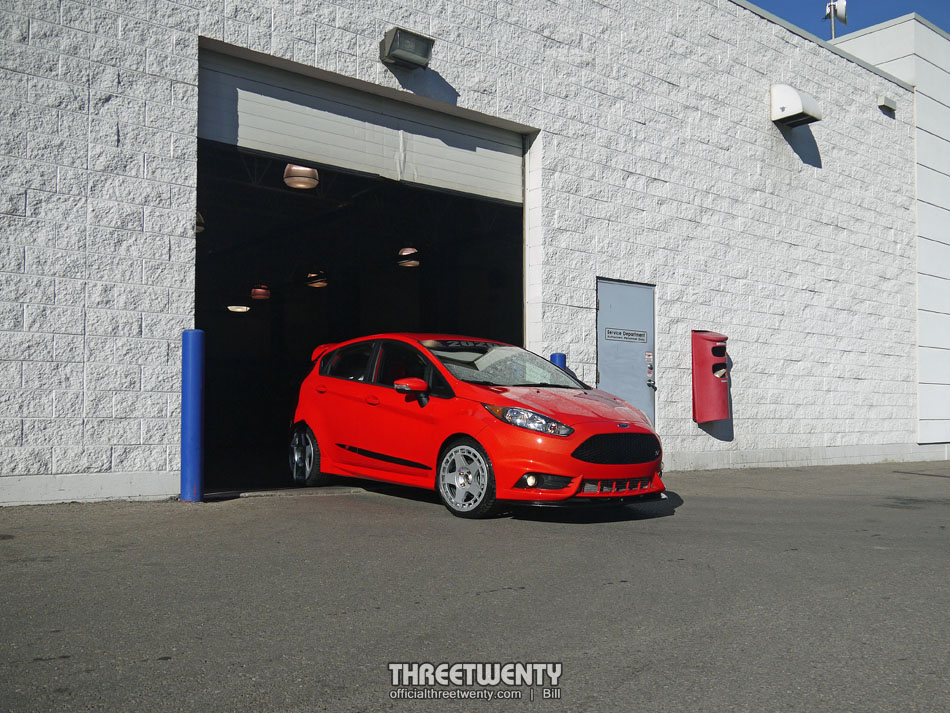 As it was noted in the article the wheels were the first to be fitted since they were the quicker and easier of the two installs. We threw them on the car and grabbed some photos even though it was still at stock height; we knew that wouldn’t last for much longer. Switching from the black OE wheels to the silver fifteen52s also worked to drastically brighten the car up – perhaps odd to say about one that’s metallic ORANGE – and we were extremely pleased with the look.

Once back at Mario’s place, we parked the two condiments side by side for a couple more photos before calling it a day. By this point Sriracha was really starting to feel like Mario’s own ST, and not just another FiST, if you get what I’m saying. 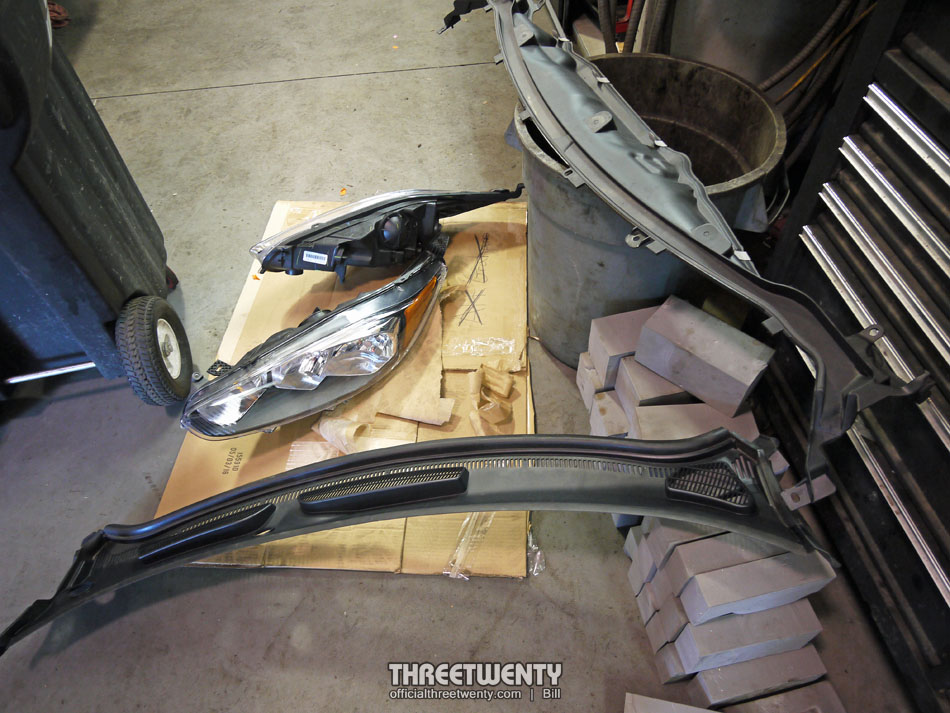 The following weekend we met up again and put the car back in the shop so that it could be pulled apart for the new coilovers. Having known that the hoists would be available and we’d have the ability to use one for the suspension, it was a no-brainer to wait instead of doing yet another suspension install on jackstands. 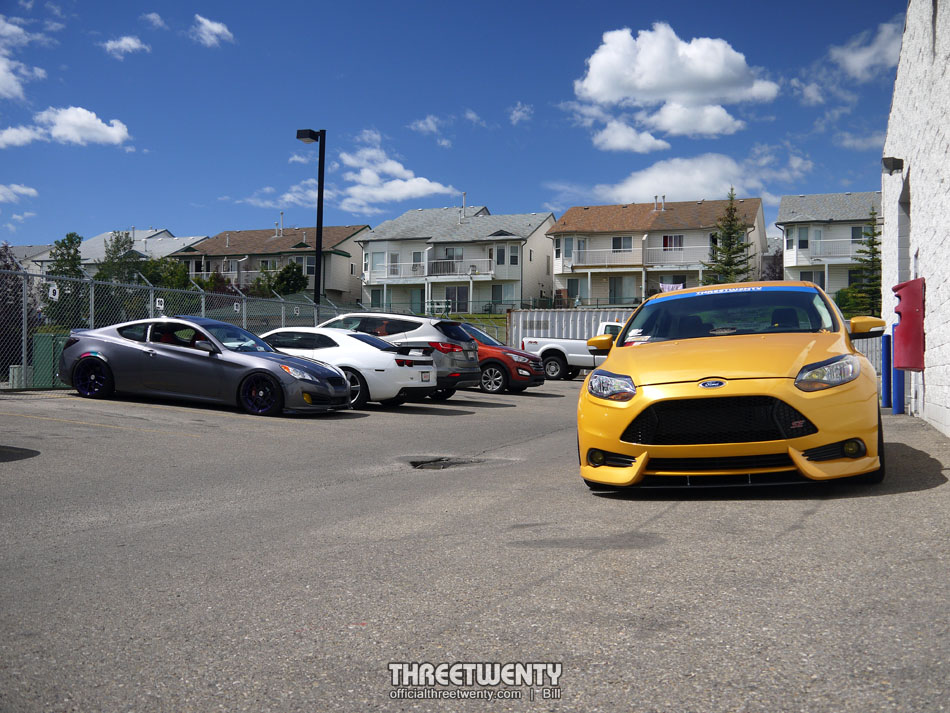 Naturally the combination of beautiful weather, a free weekend day, and car parts to install meant that a few others stopped by to hang out as well.

Ryan hung outside for a bit, touching up some paint on his Genesis.

Dave meanwhile took the opportunity to give his RSX a bath in the wash bay; incidentally, the DC5 has since been sold as Dave and Pauline have their Tacoma now.

All went smoothly and before long Sriracha was back outside and significantly lower than it had been just a couple of hours prior. After tidying up and closing up the shop, we cruised down the road for a late lunch and happily stared out the windows at the cars as we ate; the perfect way to finish off the install.

And that, is the end of today’s little BTS/extras post; it’s not the largest one as I’d said but it wasn’t the largest of jobs to be fair, though it did of course have a massive impact on the appearance and performance of the FiST. As always there are more PST posts to come, as well as more updates on projects here, so please stay tuned! Now that winter has finally concluded (….?) we are able to really get to work in preparation for the shows and meets which are already returning; here’s hoping it’s another good year with the cars!