Big modifications – widebodies, turbo swaps, bucket seats, etc. – are fun. However, the little things should never be overlooked. Not only do details really bring a project together, but when it comes to items you interact with constantly when driving said vehicle sometimes it’s the smallest pieces which make the biggest differences.

With a manual car like Selsun for example, the shifter is one piece that will be interacted with more than almost anything else so getting its feel just right will be a change that will be noticed and appreciated constantly.

To be fair – in my opinion anyway, having driven many manuals over the years – the factory setups in the Mk3 Foci are really very (very, very) good but there’s always room for that last bit of improvement, plus tailoring to individual tastes. As such, Selsun was scheduled for a couple of changes that are a common sight in our collective fleet of vehicles: a short shifter and solid shifter bushings. 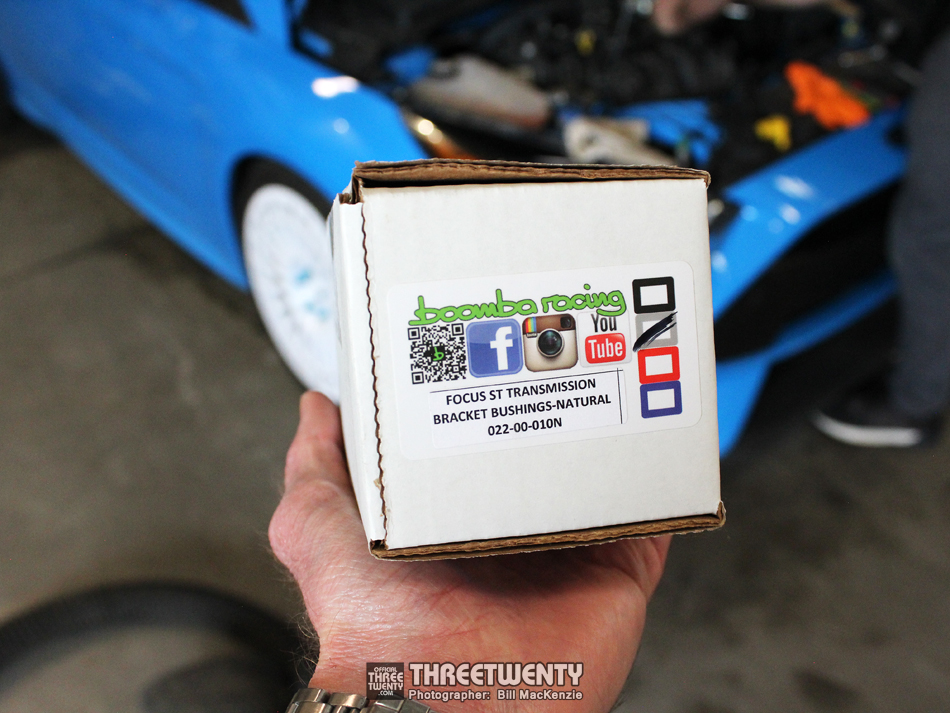 Let’s start with the bushings as they were installed first. Boomba (and others) make these for both the shifter assembly itself (inside the car) and the bracket which sits atop the transmission. Today we’ll look at only the latter, as the shifter assembly’s pieces were swapped out at a later date.

This was one of those times where there was more “teardown” than actual “install”. A fair bit came out of the bay to make room for fitting the new pieces…

The concept with the bushings is very simple but the result is very noticeable. From the factory the cable bracket is isolated slightly with rubber but the side effect is that a tiny bit of the effort exerted on the shifter ends up moving the bracket instead. Boomba’s replacement “bushings” (and those from other companies) are actually just solid metal inserts and firmly fix the bracket in place on the transmission. When combined with the matching shifter base bushings the result is a much more defined feel to the shifter.

Regardless of which bushings you’re installing though, one thing is a given: they’re going to be fiddly. Dropping one – either in the bay or in the interior – is a headache we didn’t want to deal with (again…) so Mario and Derrick used tape to hold them all in place while the bracket was positioned and bolted down. The tape was later removed, of course. 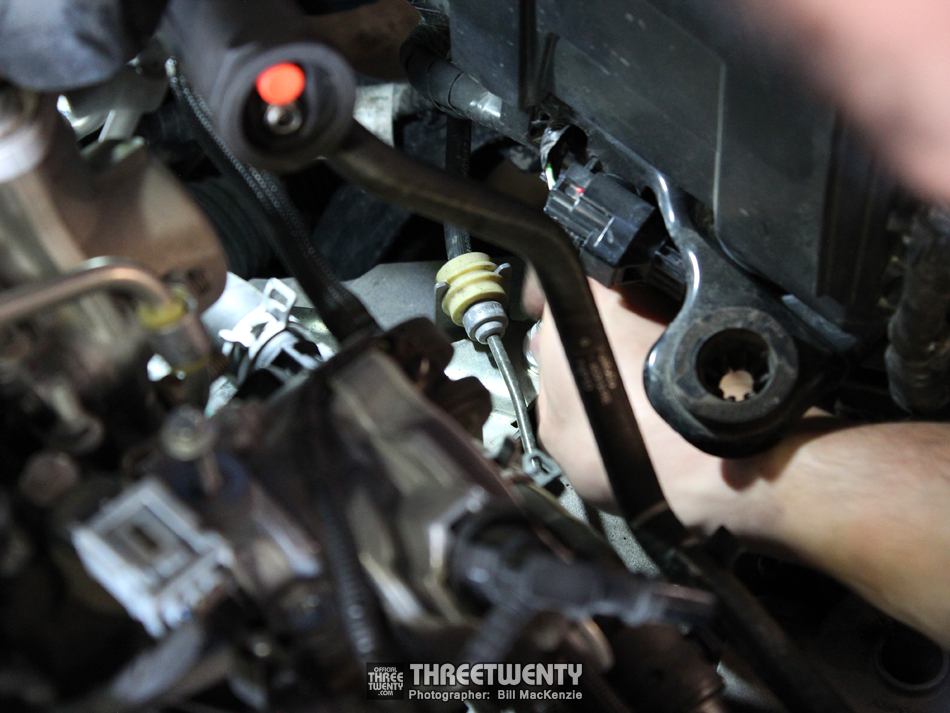 With the bracket back in its home and no bushings dropped into the bay during the process, it was then time to get to the second part of the day’s installs – Airtec’s Quick Shift. 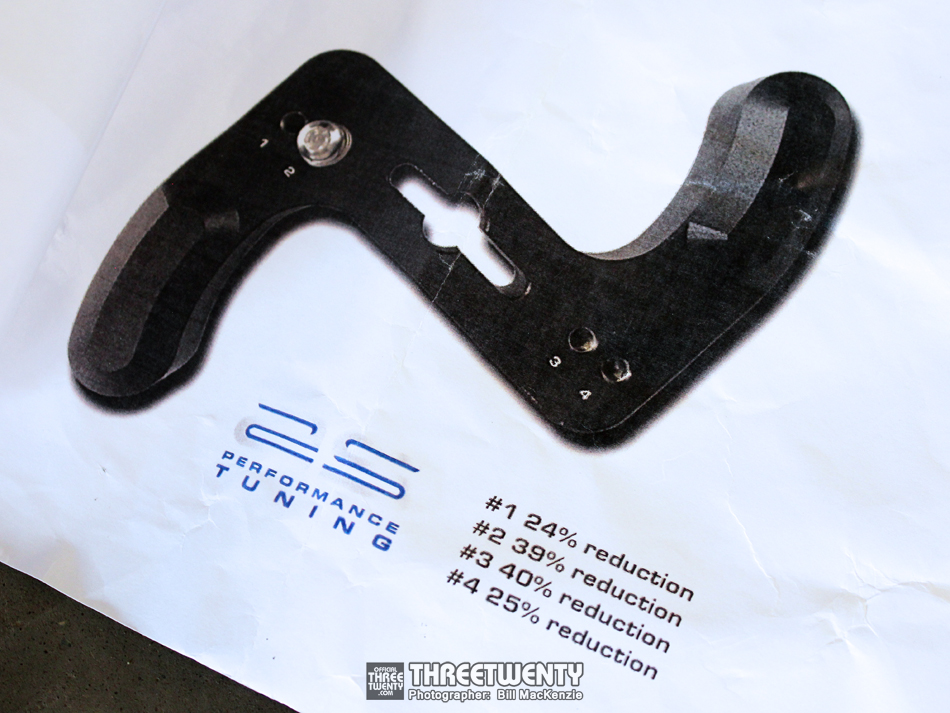 The new billet aluminum piece would replace Ford’s original cast iron arm and offer adjustability in terms of throw reduction. As you’ll note in the photos, Mario opted to start at 25% reduction.

The original arm had already been removed during the teardown phase of the afternoon prior to my arrival at the shop (you may have spotted it in the opening photos) so there are no photos of it coming out. Reportedly the Airtec piece was a much tighter fit, which may have been given away by the inclusion of a mallet in the selection of install tools. The electrical tape provided some cushioning to protect the brand new arm and its finish. 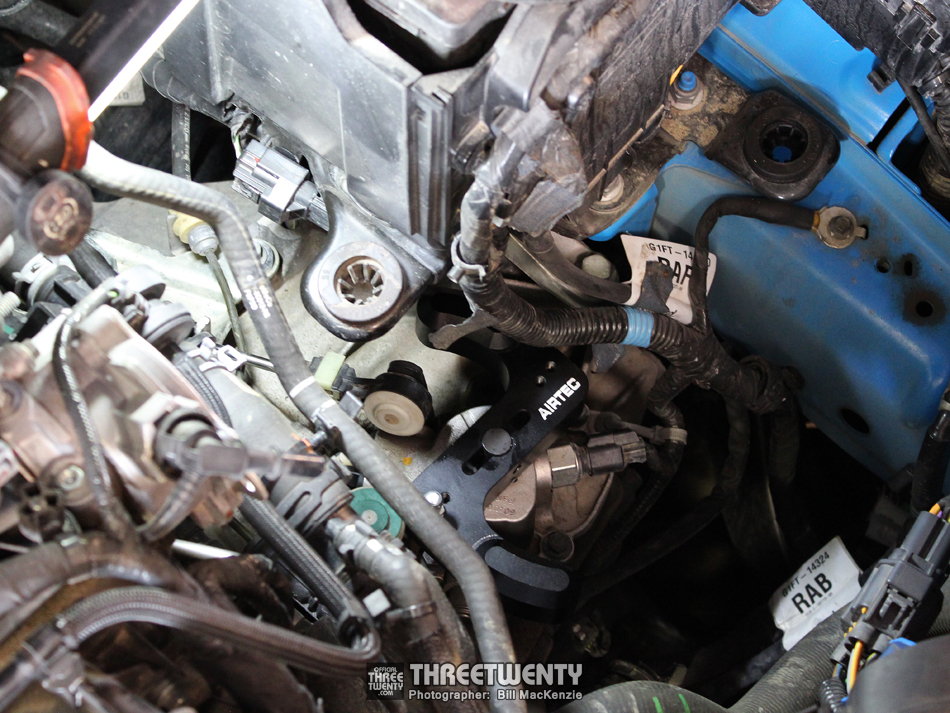 With that sorted, the dowel pin was next to be reinstalled to lock the new arm in place. This one was an even tighter fit; Mario got a bit of a workout with the hammer. I think Clarkson would have enjoyed this install. 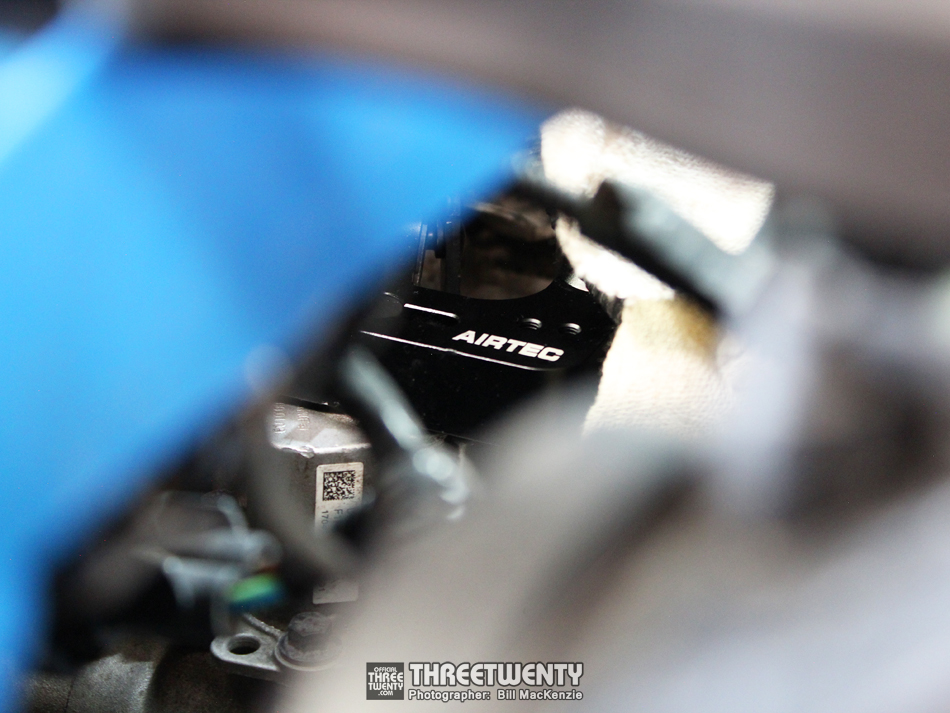 Quick Shift in place, it was then time to throw the airbox, intake pipe, and engine cover back in and take Selsun out for some fuel. This was also going to be my opportunity to experience a Stage 1 RS as Mario had just tuned it.

When I’d driven the car it was of course at stock power, and the one other RS I’d ever ridden in was completely stock, so I wasn’t sure what to expect in terms of feel…

I don’t know what else to say, aside from the stock-to-stage-1 jump in an RS is stupid. It took the car from being fast to almost downright violent in terms of acceleration. Granted, the grippier tires (on my loaned Integrales) helped it transfer the power better, but I still can’t believe how much of a change Stage 1 brought; and of course Mario hasn’t slowed down so as of the time of me writing this Selsun is now Stage 2. I’ve yet to experience full acceleration with the current setup…

…but back to the point of this post; not power, but the shifter feel. That power is fun but that’s only felt at select times when the car can be opened up. The shifter however is used non-stop and whether or not Mario is actually driving or just putting around town, with the new arm and bushings he now has a shorter throw (which can be adjusted and set up to suit his taste) and a much more solid feel when slotting it into gear. Similar parts have also been fitted over the years to Mustard, Ketchup, and Sriracha, and that’s because they make a substantial impact on the driving experience – but there’s also the bonus that they’re relatively inexpensive too. As bang-for-buck parts go it’s really hard to beat these which is why they’re on our list of go-to mods for new projects.