Alright folks, it’s time we concluded our Driven Calgary coverage! Today’s post consists more of detail shots, so there’s a bit less commentary this time around since the focus is on individual parts of cars in many cases, and not entire builds. That said, there are a few cars that haven’t been seen in the prior posts.

For most of the photos you’ll see today I was using my telephoto; I enjoy taking it out at events as it really works well for highlighting details. The trade-off of course is that I need to really (really) move back from vehicles to get shots with any considerable amount of the car within them, but that in itself can be a fun challenge as it forces some creative angles at times. It’s probably the least appropriate lens for a car show like this (cars all in very close proximity and in an enclosed venue) but equally that’s what makes it fun.

Anyway, I hope you enjoy this fourth and final part! Let’s get to it:

We start things off with some of Lowcals’ cars, all lined up… 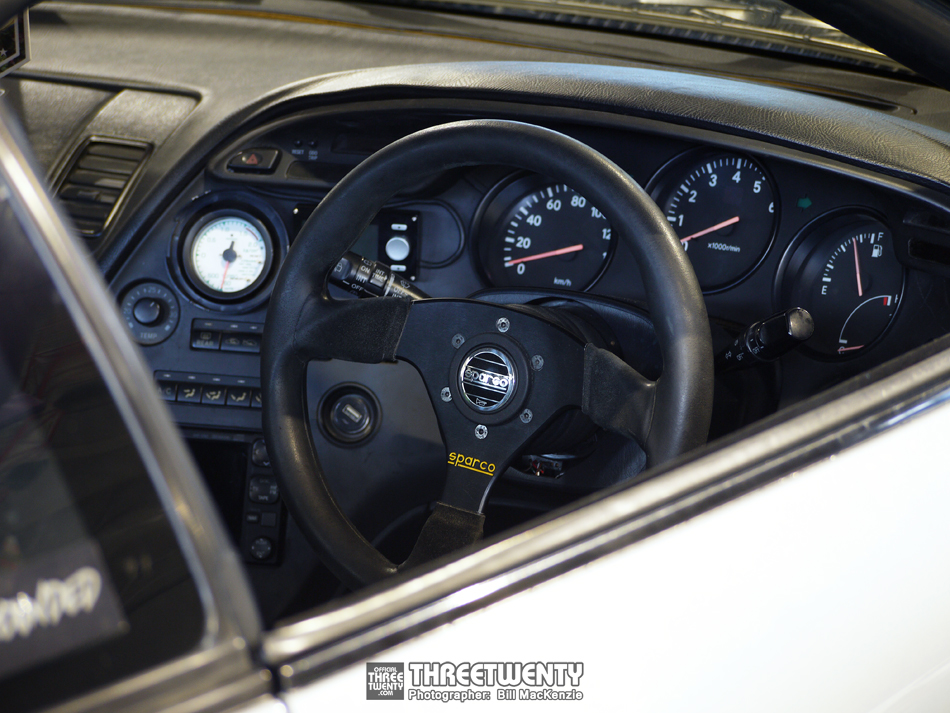 …and a couple of detail shots of Jesse’s Supra. I really like how he’s integrated the aux gauges in his dashboard – very clean and almost OEM+. I also really like the little decals he added to the Enkeis, and not just because I made them, I promise (shameless plug, I know).

It’s impossible to walk by Derrek’s Integra without taking a closer look at his engine bay; it’s definitely one of the best around. I believe he took home a couple of awards this year for the car as well, so congrats to him!

Jason’s definitely not wasting space behind the spokes of his TEs. Yikes. 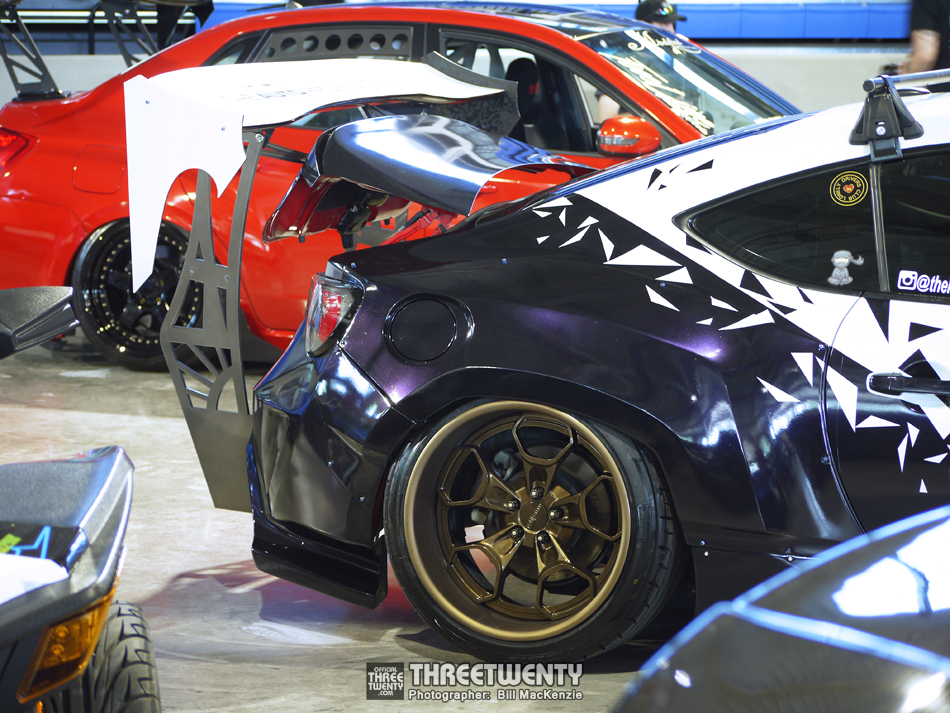 And let’s stick with 86s for a moment (that’s the best transition I can think up at 2AM) with a couple more shots of Kanji’s purple/white, Varis/Aimgain/facelift BRZ. 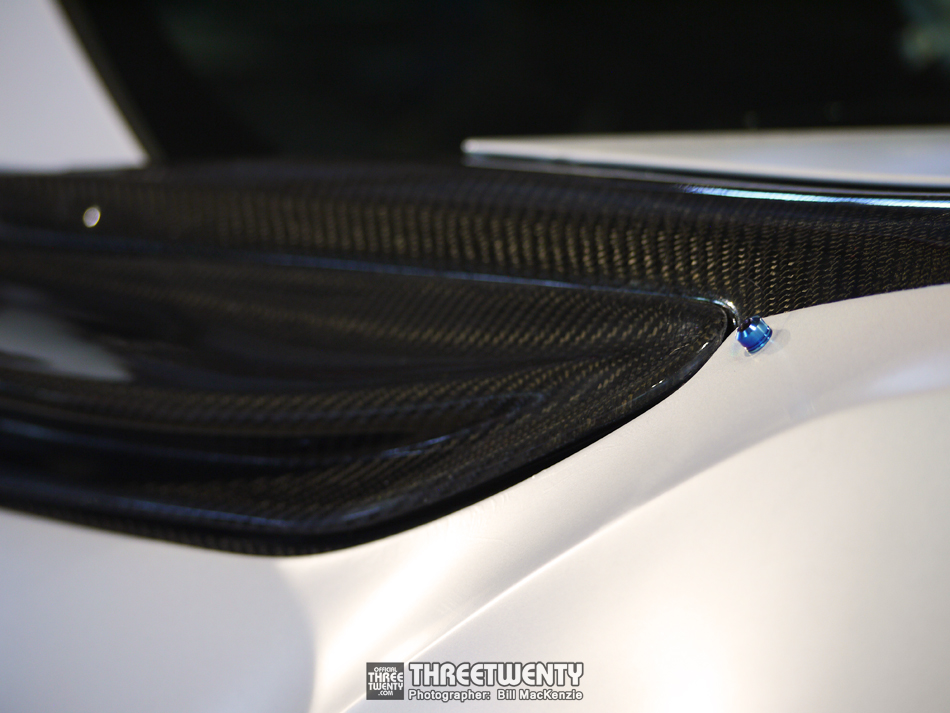 I really like how he took the chance to add a bit of carbon as an accent, not just in the form of the fender trim but the fenders themselves too. Note the very nice hardware as well.

Is it strange that some of my favourite cars at the show weren’t even 1:1 scale? There was a ton of great RWB merchandise on hand; I picked up an air freshener and t-shirt (the latter signed, natch), while my mother went and got herself a shirt, phone case, and plush nitrous bottle (hahaha) – all signed as well. However, the best items were without a doubt these stunning models. I would have loved to pick one or more up but couldn’t justify $250 a piece, though an absolute bargain for the workmanship and time, for a static display piece especially after spending more on the Focus.

There were even some transkits for scale models; it would have been nice to grab one of these for a future build but I already have more than enough kits in my collection.

Speaking of RWB and signatures; later on in the day Charles called to me because Nakai-san was going to be signing his R33 and he wanted a shot of it. Well, Nakai was on a mission, and with all of the people around him this was the one and only shot I was able to fire off of him actually signing the R33; I had all of a few seconds to line up my camera (with the telephoto on) and find an opening before he had finished signing and was gone again. Haha

And there it is! Charles had him sign the blank rear emblem; this way the signature can survive through any future rewraps the car may see. 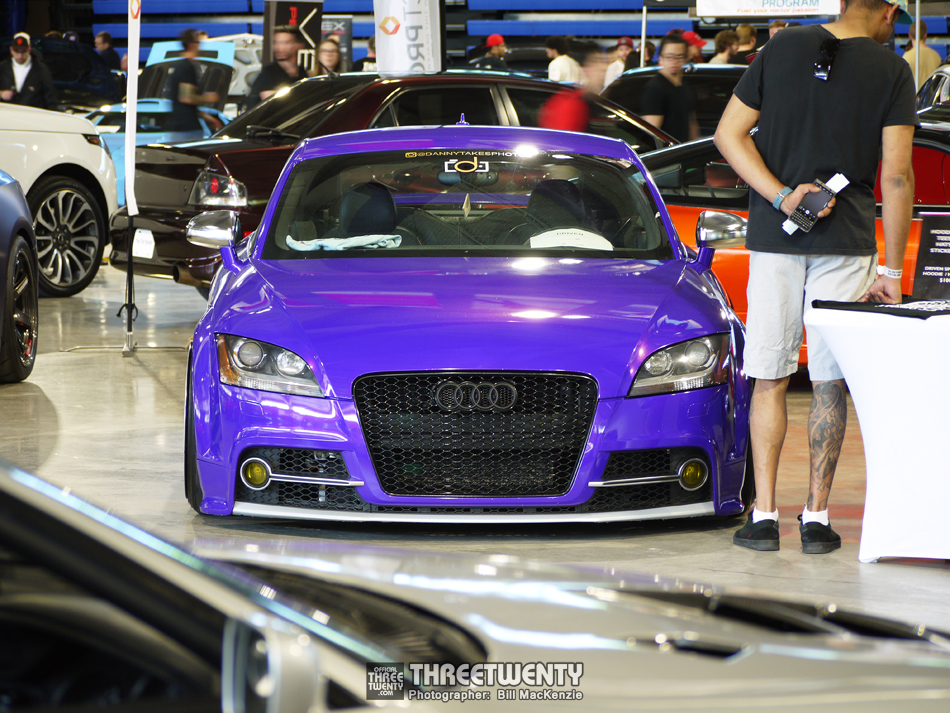 Danny’s TT is quite photogenic with the colour and insane stance. Since the show he has gone and added wider front fenders to further refine the fitment, along with a couple other updates.

If it weren’t for the license plate I wouldn’t have recognized this Evo; it has been posted on the site before but that was back when it was wrapped gold; this newer wrap was a big change and the colour suited it perfectly.

One detail I really enjoyed was the treatment given to the canards; the tops were wrapped body colour, while the undersides were left bare to show off the carbon weave. This is definitely something I’ll remember.

Another of the RB V2 FR-S, but from the rear this time; note the Buddy Club “Aventador” tail lights.

Why not throw in another shot of David’s RB 2JZ S15 as well? This time his DSPORT feature was more prominently displayed; it was neat to see that the feature was shot during the winter as the snow made for a nice backdrop behind the yellow/gold/orange painted car.

Mustang. Crowds. You all know. 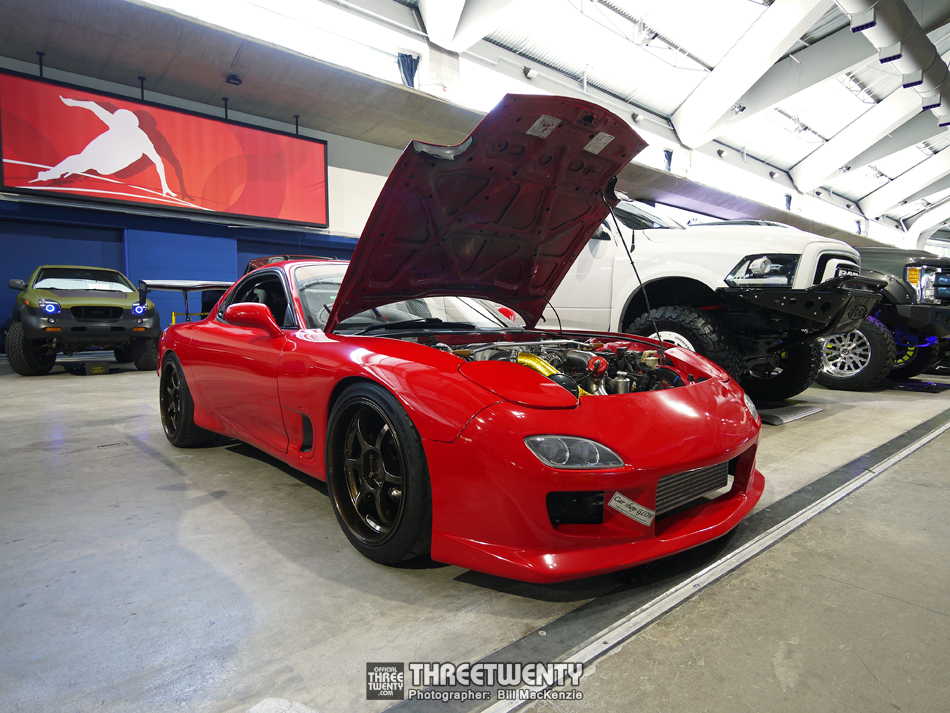 Parked amongst some of the trucks (and even a VehiCROSS!) was this rather nice FD, rocking its stock fenders which can be a rare sight, especially these days.

As seen originally in Part 2, as promised here’s a bit more of both the purple M4 and highlighter (a fair way to describe it, no?) M2. I like the accented bracing behind the kidney grilles on the M4; you can do fun things with accents on those! I also like the use of similar cues between the two cars such as the accented mirror caps and canards.

Also note the retrofitted M mirrors on the M2; to my knowledge this became such a common (or at least requested) swap on these cars, that BMW made them standard fit on the updated M2 Competition.

The late afternoon sun shining through the Oval’s upper windows was falling nicely on the engine and supercharger of Trung’s S2000.

ST butts. FiSTs really benefit from wing risers, incidentally. Those, and the carbon duckbill, keep getting a lot of attention! fifteen52 sells the latter for those wondering, since it’s a common question.

It’s RWB time now; or rather, 1:1 RWB time, starting off with the aforementioned etched projectors of the white example – these were an awesome little touch. 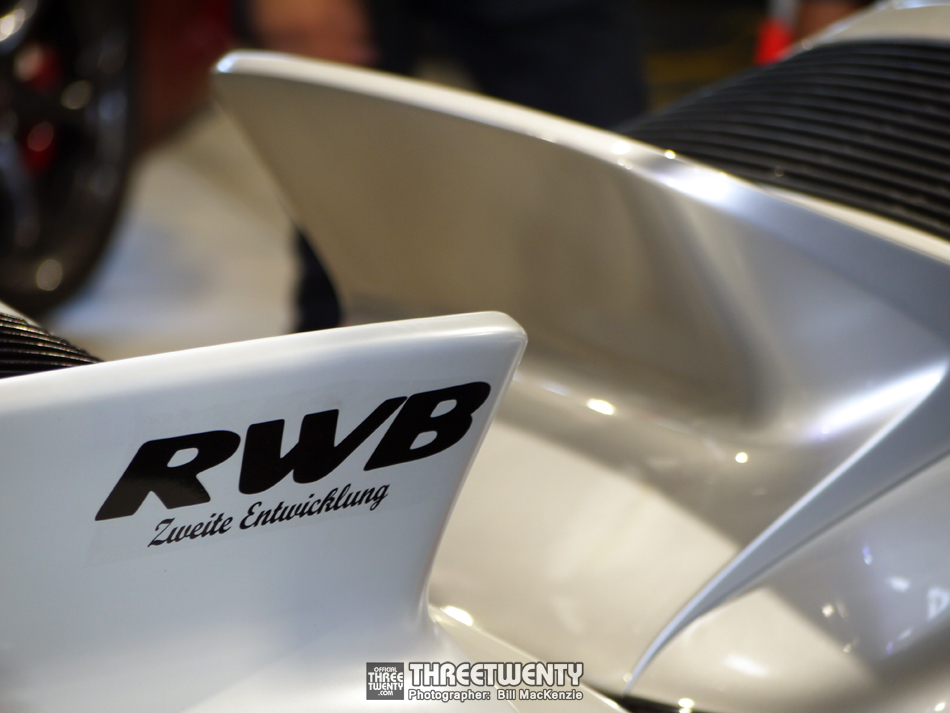 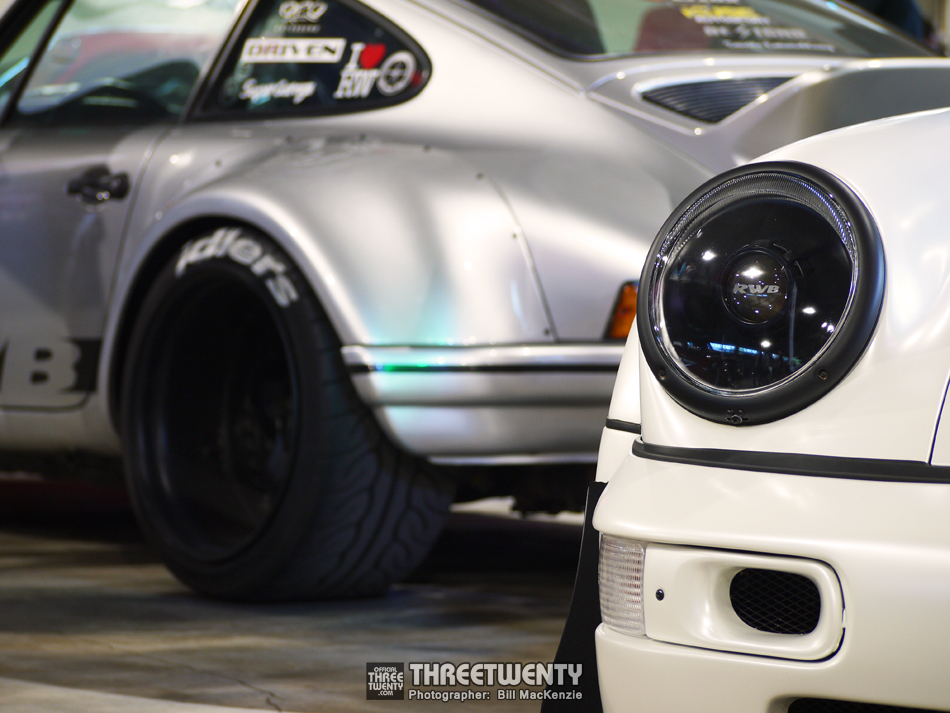 I took the chance to get some assorted shots with two or all three of the Porsches together. Some even turned out half decent and therefore were edited for the site – haha. Something about monkeys and typewriters and Shakespeare…

It’s also time to take a better look at that red one…I have to wonder how many people this sight would trigger; seeing a K series from Honda stuffed into a 911? With swaps like this I say that you can’t make overriding, all-encompassing declarations of which cars should or shouldn’t be on the receiving end. I see it as being a more case-by-case basis; if a specific car is a survivor, or historically significant, old and numbers-matching, or so forth, keep it original. If it’s a well-used example that isn’t a low production number, low-volume model, or something else along those lines, why not go ahead and play around with it? 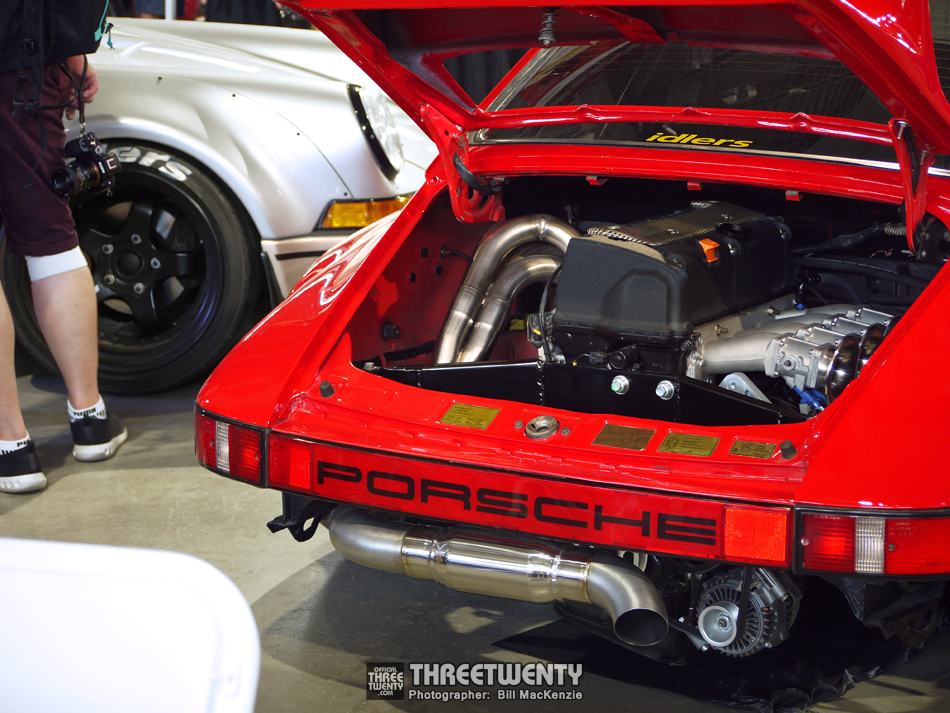 That said, I don’t believe I’d seen a K-911 before, so I was a bit surprised by it. If that didn’t confuse or upset showgoers enough, there were also some LS-swapped 911s in Haute AG’s booth.

And finally…I wasn’t sure at first how to wrap up this coverage, but I figured why not save this for last because it was just so freaking impressive. I showed a sample of it in Part 1 and said that there’d be more coming; don’t worry, I hadn’t forgotten.

It was a 1972 Mazda R100 and as said in Part 1, without a doubt it was one of the best vehicles to be at any Driven show, ever. I don’t know the full ins-and-outs of the build (I’m sure that if there was a mod list, it’d have been more like an encyclopedia) but the work spoke for itself. At first glance it was obvious that this car would be taking home an award, and that it did, winning Best Overall Performance at the show! 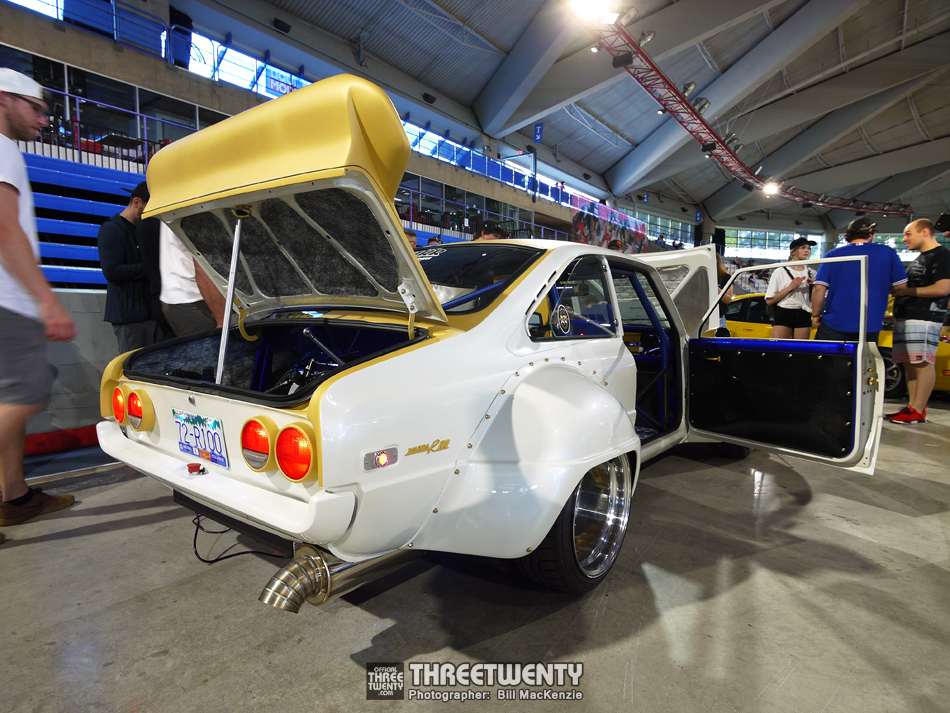 Take your time on these photos – this thing was unreal and if I could have, I would’ve filled a whole memory card with it. It’d certainly take about that much to showcase the extent of work that was on display. The fact it was such an obscure chassis only made it that much cooler.

The satin gold on the handles and locks was an awesome touch, while the extensive cage carried through to the engine bay – reminding me of the late ’00’s era and cars like Jason Siu’s Integra or Tjin Edition’s R34 specifically.

Meanwhile, out back the MASSIVE (like, two postal codes wide) flares were hiding something I’d never seen before – two tires each! Worth noting is that this was not a case of the car having two wheels on each side like a dually; rather it was one wheel modified to accept two tires. Just….what?! This thing was another level of creativity, detail, nuttery, so on.

This was genuinely one of the most impressive builds of any genre that I’ve ever seen in person, and just when you thought they must’ve overlooked something, somewhere, you’d see that it had cupholders too! Haha

So yes, we have now wrapped up our Driven Calgary coverage for this year. Congratulations to all of this year’s winners, and thanks once again to Mark and his team for the hours they put in behind the scenes to make these shows happen! They’ve been running around endlessly putting on show after show and deserve a massive round of applause for their efforts. It’s easy to forget how much work takes place leading up to the big day, but it’s absolutely appreciated.